Counting down the top 10 most-viewed posts of the year...here's #10, originally posted on 9/3/20.
Jody A. Forrester is the author of the new book Guns Under the Bed: Memories of a Young Revolutionary. It focuses on her life in the radical Revolutionary Union group during the Vietnam War era. Her work has appeared in a variety of publications, including Prime Number and Claudius Speaks. A former chiropractor, she lives in Los Angeles.

A: Guns Under the Bed is an examination of three-plus years in my life that had long remained secreted. I was embarrassed by the extremity of the path that I took and was afraid that even friends would negatively judge me. Other than my husband, I told nobody about that time in my late adolescence and early twenties.

But finally it was time to reclaim those years, to bring them out of hiding, and understand the choices that I made at the time. 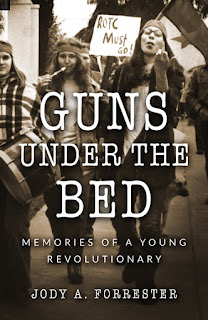 Q: You write, "So many in my generation protested the unjust war in Vietnam and marched for civil rights. How was it that I was one of only a few hundred who went on to join an organization with the most extreme of ideologies?" How would you answer that question?

A: I was, and am still, passionate about fairness, or the lack of it, to those who didn’t have the privileges of my comfortable white middle-class home. It felt so wrong to me that civil rights were constantly violated for people of color and those stricken by poverty. Even worse, the Vietnam War was raging with no possible end in sight.

Without a clear-cut ideology, marching on the streets wasn’t enough for me, and the Revolutionary Union, a communist organization, attracted me with their coherent solutions to the double-edged sword of capitalism and imperialism. Following the dictates of Chinese ruler, Mao Tse Tung, I came to believe that a working-class uprising would be the most viable banner to march under.

I was 17 and full of idealism, but in the end, the organization’s suppression of individuality and violence towards what was identified as the enemy was no longer something that I wanted to be a part of.

A: I chose the title fairly spontaneously, before the first draft was finished. It was remarkable to me that I slept for years with guns under my bed in readiness for the anticipated uprising against the ruling class. If it came to that, would I have pulled the trigger? That question plagued me in nightmares for decades, and was one of the driving forces that drove my writing of this memoir.

A: The necessity for protest. In the end, my generation was responsible for the U.S. pulling out of Vietnam. Activists are a powerful bloc that can, indeed, influence public policy. Now, more than ever, they need to make their voices heard, both on the streets and in voting booths.

On the other hand, my memoir can also be a warning not to give your choices over to a hierarchical ideology that dictates such a narrow path. In retrospect, I see the Revolutionary Union as a cult – never a good thing.

A: As I am with a small publisher without a publicist on staff, I’m concentrating on marketing the book. I do have a few ideas for short stories, something that I was doing before this memoir took over. We’ll see!

A: Nothing that hasn’t been said before. Have empathy and compassion for those oppressed by our country’s disregard. Be true to the best part of yourself. Even one person can make a difference!