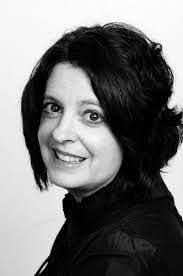 Dianne K. Salerni is the author of Eleanor, Alice, and the Roosevelt Ghosts, a new middle grade novel for kids. Her many other books include The Eighth Day series. A former teacher, she lives in Pennsylvania.

Q: You note that you were inspired to write this book after reading an article about Alice Roosevelt, daughter of Teddy Roosevelt. Can you say more about how did you come up with the idea for Eleanor, Alice, and the Roosevelt Ghosts?

A: I had been toying for a long time with an idea for an alternate reality where ghosts were real and so prevalent that a scientific discipline had developed to “diagnose” them into categories: Friendly, Unaware, or Vengeful. I wanted to write a story that centered around a ghost that was misdiagnosed and more dangerous than it first appeared.

Originally, I tried to write a mystery set in the modern world with characters I completely invented, but it just wasn't working.

A: I read Eleanor Roosevelt's autobiography, along with several biographies of Alice and the Roosevelt family in general. I also did research specific to the time period -- the 1890s -- so I could flesh out the historical setting as much as possible. 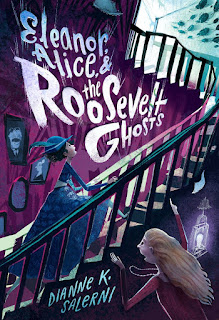 The strangest thing I did was to take a class in ghost hunting from my local community college. Since I am a big skeptic, I certainly didn't expect to encounter anything supernatural in our "field trips."

To my shock and surprise, I came home with an unexplained voice on one of my recordings! I made a video about my experience, which can be found on YouTube: https://youtu.be/VQqJvM-4bSs

A: Whenever possible, I used actual historical events. Alice Roosevelt was sent to her aunt's house in 1898 because she was misbehaving and her stepmother couldn't handle her. Shortly after her arrival, the U.S.S. Maine did blow up in Havana's harbor and her uncle was sent to investigate. Eleanor lived nearby, and she and Alice did not get along.

I used an anecdote that Eleanor mentioned in her autobiography about family trips to Cooper Bluff on Oyster Bay during a key event in my fictional story. Nellie Bly was a real investigative reporter, and Nikola Tesla actually did invent something that he believed was transmitting the voices of spirits.

There was so much rich and interesting history already there for the taking. All I had to do was add the ghosts!

A: I hope that my story helps kids connect more with the famous people they read about in history. Eleanor Roosevelt may be remembered now as a great philanthropist and beloved First Lady, but she started out as a lonely, awkward young girl who had trouble relating to her peers (and who was kind of emotionally abused by her mother).

I'd like to think that lonely, awkward-feeling girls of today might read this and think, If Eleanor could do this, so could I.

A: I am finishing up work on my next novel, Jadie in Five Dimensions, which will be published in the fall of 2021. It's a science fiction adventure inspired by the works of William Sleator and the Victorian novella Flatland.

My protagonist Jadie is a girl who was abandoned as an infant and rescued from certain death by hyper-intelligent beings from the fourth dimension. Now 13 years-old, Jadie serves as an Agent for those four-dimensional beings, performing missions designed to save the planet.

However, during one of her missions, she discovers that her origin story is a lie, her birth family has suffered multiple tragedies engineered from 4-space, and the time has come to uncover the conspiracies surrounding her life.

A: I've been publishing books for kids and teens for 10 years now, starting with We Hear the Dead in 2010, but until this year, there have never been any audiobooks made from my novels.

Within the span of a few months this year, I suddenly have four audiobooks produced by the wonderful company Recorded Books. Eleanor, Alice, and the Roosevelt Ghosts is available as an audiobook, with two voice actresses reading the parts of Eleanor and Alice, and all three books in my Eighth Day fantasy series are now available.

It was very exciting to hear my books read aloud by professional readers for the first time!