Edwin Hill is the author of the new mystery novel Watch Her, the third in his Hester Thursby series following Little Comfort and The Missing Ones. He lives in Roslindale, Massachusetts.

Q: This is the third in your Hester Thursby series--did you know from the start that you'd be writing more than one book about her?

A: Yes, I conceived the series from the beginning, and I have an idea of where it will go over the next few books, at least on an emotional level.

The stories all center on Hester Thursby, who is a research librarian; her long-time boyfriend, Morgan Maguire; and Morgan’s niece, Kate, who lives with them. I have a few trials and tribulations planned for Hester and her found family, but it’s figuring out the crimes that is the hard part! 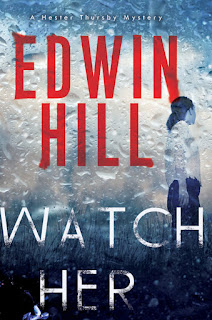 Q: How do you think Hester has changed over the course of the series?

A: The first book in the series, Little Comfort, begins a few months after Kate has come to live with Hester and Morgan. Hester is in her late 30s and has opted out of having children, so she’s not that thrilled to have a 3-year-old child foisted on her.

As the series has evolved, Hester’s relationship with Kate has evolved too, and in Watch Her, Hester experiences some of the joys of parenting.

The biggest change in this book, though, is between Hester and Morgan. They have a very dysfunctional relationship that I always say is based in love, but not necessarily in honesty. And they never talk about their pasts with each other – no talk of family or exes or anything like that.

In this book, Morgan begins to break down these barriers. He proposes a game where they ask each other a single question each day, and they each have to answer, no matter how uncomfortable the question makes them.

Hester agrees to participate reluctantly, but as the novel progresses, she learns that she likes knowing more about Morgan, even if she hates sharing about herself.

A: My approach to the ending has been so different with each of my novels. With Watch Her, I had no idea how it would end – or to be more precise, I had an idea, and it changed so much, that I can’t even remember what it was! I changed the murderer at least four times during the course of writing, but I’m really happy with the where I landed!

Q: The book is set in Boston--how important is setting to you in your writing?

In each of my novels, I’ve explored a different part of New England and used the setting and landscape to tell the story.

Little Comfort takes place in Boston’s Beacon Hill and also in the Lakes Region of New Hampshire in the dead of winter. I wanted to use the remote landscape of New Hampshire to up the stakes when Hester is kidnapped by a serial killer.

My second novel, The Missing Ones, takes place in the fall, and most of the action unfolds on a tiny island off the coast of Maine. In that novel, I wanted to explore what it was like to live in a closed community in an isolated location.

In Watch Her, I wanted to keep the action situated in Boston, so I used a neighborhood called Jamaica Plain which is a mix of urban and residential, but also has a huge park running through it called the Emerald Necklace. This park was designed by Frederick Olmsted at the turn of the 20th century, and at the very center of it is Jamaica Pond.

I used to live a few blocks away from the pond and went running there most mornings, right by a ruined, burned-out mansion that sat behind an imposing chain-link fence, Pinebank Mansion.

The mansion was torn down a few years ago, but I bet I wasn’t the only morning jogger who imagined what it might be like to live in the beautiful house and to wake up each morning beside the pond, so I decided to resurrect Pinebank for this novel. It was fun to be able to use the power of fiction to change history!

A: Right now, I’m working on a stand-alone novel tentatively titled Happy Time. It’s about three siblings who are forced to confront their past when the woman convicted of murdering their father asks them to support her at an upcoming parole hearing.

One of the siblings, Natalie, works as a police detective and is simultaneously investigating the brutal murder of an unidentified man who might be her ex-boyfriend.

Her sister, Grace, pours all her drive into her two daughters and a thriving baking blog. When Natalie’s investigation begins to focus on Grace’s husband, the perfect façade crumbles.

Meanwhile, their brother, Henry, works as a psychotherapist focusing on grief and shame. When a client confesses to an affair with Grace’s husband, Henry has to choose between loyalty to his sister and ethics.

Somehow, all these story lines are going to tie up in the end… I just have to figure out how!

A: I love to hear from readers, so don’t be shy! You can reach me through my website: edwin-hill.com. Thanks so much for having me on the site!