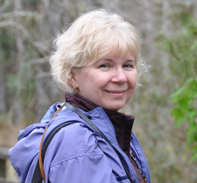 Q: How did you come up with the idea for Rare & Blue, and for the species you include in the book?

A: I got the idea for this book while on a trip to Maine. When I spotted a blue lobster on the wall in a maritime museum I wondered what else in the world is rare and blue.

Also, around that time I read an article about the history of “Earthrise,” the iconic photo taken in 1968 by Apollo 8 astronaut William Anders. The photo highlighted the captivating beauty of our blue planet as a whole. It became “the most influential environmental photo ever taken.” I knew that view from space would be the ending for my book; I just needed to fill in the rest with unique blue species that live on the blue planet.

A: I did research online, at the library, and in person at national parks, nature preserves, aquariums, zoos, etc. And I contacted biologists as well. I wanted there to be progression of size, diversity of habitat, and a variety of species represented in the book. 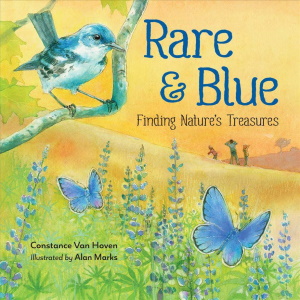 Eventually, there were items that I had to leave out for an assortment of reasons. The gorgeous and interesting blue milk mushroom, for example. After much thought, I decided that I didn’t want to encourage eating wild mushrooms without having expert help for identification and I didn’t want to encourage kids to pick wild mushrooms on private property without permission. Too much to explain in the limited space of a picture book.

Over a period of years, I learned that there are more rare and blue species on the planet than I ever imagined. I was not at a loss for things to put in my book! Which leads to the point that “rare” doesn’t only mean few in number, it can also mean “uncommonly good or remarkable.” While the species in my book are mostly few in numbers; I like to think they are all remarkable.

Q: The Kirkus review of the book calls it "A visually appealing, informative peek at some of nature’s rare treasures, with a strong ecological subtext." What do you hope kids learn about ecology from the book?

A: First, I hope to encourage kids to get out and see the treasures of the natural world for themselves. And then to realize that species are rapidly declining worldwide, they need protection from habitat destruction.

Q: What do you think Alan Marks's illustrations add to the book?

A: Alan’s illustrations have such interesting perspective, which adds to the treasure hunt theme of the book. And his color palette of the many shades of blue is luscious.

I am especially fond of the blue whale and the bison in the big bluestem prairie grass—he really captured the majesty of these animals. Though, I also love the vibrant blue lobster because it was the inspiration for the book.

A: I’m working on several nonfiction picture book manuscripts. I’m enjoying getting to know the animals and birds of Montana where we moved several years ago. We have grandkids here, so we enjoy getting out and exploring with them.

Since Covid hit and I’ve been spending more time close to home, I’ve started to write a weekly Facebook post. It started as a countdown to the delayed publication of Rare and Blue with short essays on things that are rare and blue, but not in the book.

Now, it’s a mish-mash of more rare and blue items, plus things that have caught my eye and topics that tug at my heart. It’s become an exercise that I look forward to; it keeps me writing when the distractions of the world loom heavy.

A: I wish that my parents were still living so they could see the finished book. It was a work in progress for many years that went through several versions. I started working on it though, when they were both still living.

They would especially have loved the illustrations of some of their favorite things. My mom was a birder; I think she always wanted to see a Cerulean warbler. My dad grew up on a farm in Nebraska, he was well aware of the implications of the loss of the tall grass prairie.

I’m happy that they passed down their love for the natural world to me and I’m trying to do the same for my children and grandchildren, and the readers of Rare and Blue.

Thank you for giving me this opportunity, Deborah! Into the wild blue yonder!