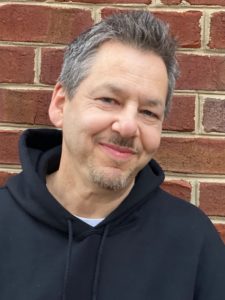 Adam Schwartz is the author of the new story collection The Rest of the World. His work has appeared in a variety of publications, including Arkansas Review and Mississippi Review. He teaches high school in Baltimore.

A: It took me about a decade to write the stories in the collection. Working out the inevitable kinks in a story can be a sluggish process for me.

Excavating characters’ motivations, generating narrative urgency and emotional energy, striving for Poe’s “unity of effect,” sowing details that are evocative or vivid or revelatory, getting out of my own way—to whatever degree my stories achieve these effects, none of it comes easily or quickly for me. 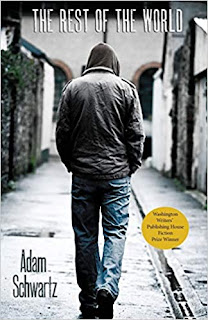 A: Four stories are told in first person POV, and I deliberately alternated those stories with the ones told in third person.

The last story in the collection is about a teacher in a classroom. It’s the only one that is autobiographical, and I placed it at the end as a kind of postscript to give readers some context for how the other stories were written.

Q: As a longtime educator, what impact does teaching have on your writing?

A: All the stories in the collection are set in Baltimore, and they were all inspired by getting to know the teens in my classroom. The students at my school are 16, 17, 18 or sometimes even older, but they’re kids.

And Baltimore puts so much pressure on some of them and makes some carry such a heavy load. Some kids—not all, but some—are made to grapple with grief and loss and all kinds of instabilities.

The struggles kids in Baltimore face are often the consequence—direct or indirect—of systemic inequities that have been strangling Baltimore neighborhoods for generations: disinvestment and municipal neglect; corrupt policing and mass incarceration; few job opportunities and iffy public transportation; food deserts and housing evictions.

The instabilities and hazards created by these injustices often fall hardest on children. There are way too many kids in Baltimore that are forced to live with some expectation of turmoil.

And though I worry about the mental toll carrying such worries exacts on children—how it shapes their views of themselves and their prospects—I’m also moved by kids who continue striving for better in the face of sometimes catastrophic obstacles.

Perhaps I put the characters in my stories in crisis because I’ve seen the grit and resilience of kids at school who refuse to give into despair.

A: American media is full of toxic narratives about Black communities and Black men. In particular, too much news coverage criminalizes Black men.

The young men I meet at school don’t fit this script and they never have. And when the 12th graders in my classroom talk about the challenges they face growing up in struggling communities, they do it with a lot more depth, nuance, and context than news reporters.

By shaping kids’ struggles—their hopes and griefs and the sometimes impossible choices they confront— into narrative, I hope to capture truths that reflect the strength, will, generosity, and essential goodness so many Baltimore teenagers have shown me over the years.

I hope the characters in my stories—imperfect though they may be—reflect the faith I have in Baltimore’s kids.

A: I continue to write stories. I’m about half done with my next collection.

A: I spent much of my adolescence adrift. When I get a kid in class who’s disengaged and bored, I think Ah, a kindred spirit. I was you once. (Of course, I rarely say this aloud to students because it might come off as seeming too desperate to make connections or force comparisons.)

But I often feel an affinity for kids who are restless and bored because I want to know where it’s coming from. And very often, disengaged students are checked out as a result of something they’re dealing with outside of school.