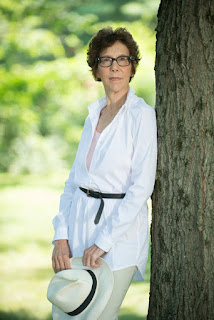 Marlena Maduro Baraf is the author of the new memoir At the Narrow Waist of the World. Born in Panama, she moved to the United States as a teenager. She worked as a book editor at Harper & Row and McGraw-Hill.

Q: Why did you decide to write At the Narrow Waist of the World, and how was the book’s title chosen?

A: I didn’t decide. It really took me by surprise. I’d signed up for a course in creative writing at the Sarah Lawrence Writing Institute near me in Westchester. “Finding Your Voice,” wonderful teacher and seven other writers.

One of the first assignments was to write about a very painful moment in our lives. This one thing surfaced for me. I saw myself at the age of 5 or 6 carrying a white tray with hinged sides, hot milk in the Noritake cup and an English silver setting. I was taking dinner to my mother who was very troubled at the time and was in her bed. A story follows that I won’t reveal here.

This is how the memoir began, inauspiciously, a collage of memories that describe a difficult but also a loving childhood. The title for that first scene was “Mami,” and that’s the name that felt right for what became a memoir.

Over the years I found a group of talented writers to meet with and share our developing work. They were all novelists; I was the only memoirist. We adore each other still today.

Someone suggested I consider another title, something lyrical with the feel of the memoir. There was a line in the book describing the Canal Zone as “a cinch belt that cut across the narrow waist of Panama.” 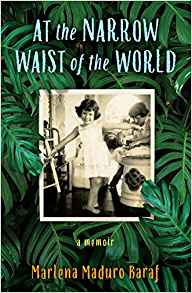 The key was “waist,” symbolic of so much. Feminine, like the two main characters. It was also visually Panama, a narrow isthmus that connects North and South America—and the center of the world during my childhood. When I tried “At the Narrow Waist of the World,” we knew it was right.

Q: You write, “I am becoming more and more fascinated by multilingual writing.” Can you say more about you how you employ it in your work?

A: I couldn’t leave out the Spanish of my childhood. Spanish expressions came loaded with feeling and connections to the culture in which I grew up. Phrases that my mother used, for example, are inseparable from who she was.

I tried to weave in the Spanish phrases in a descriptive context that made their meaning clear in English; I almost never employed a literal translation. Readers say it works. People tell me I should do podcast readings because the mix of languages is especially beautiful.

Q: Did you remember most of the details you write about, or did you need to do research to recreate some of the scenes in the book?

A: Most are from my own memory because I was trying to access lived experience.

But I did rely on my sister and two brothers for their own experiences with our Mami and also things that happened when I was no longer living in Panama. I interviewed elders in the family for details in the past, because I go into generations before mine. I called my old U.S. college roommate, found her in Washington state. That was fun.

I used my sister as surrogate to interview a person in Panama who’d been important in my mother’s life. I interviewed my mother’s elderly psychiatrist by phone. I did extensive research on the history of the Spanish-Sephardic community in Panama and before--even though the memoir is a slender volume.

A: My sister and brothers have known all along about the book and have encouraged me to tell the truth of our childhood, It’s of course my version of it. They read portions published in journals. but they haven’t seen it all. I’m a little nervous about one or two scenes.

There’s a book fair in Panama about to begin and I’ll be there and try to communicate the themes and ideas around the memoir in Spanish. I’ll find out what my extended family thinks. I call them the galaxy; we are such a close-knit group.

In the memoir I am revealing family truths, and each person has their own memories and experiences with much of what I’ve written. They’ll either be thrilled to read versions of what they know or upset by my saying certain things in public. I’ve used real names. Please wish me luck!

A: I’m so busy now with the launch of the book, articles. events, of course. But once things settle down, I will continue to interview Hispanics in this country, a series I begun called Soy/Somos, I am/We are. I’ve interviewed about 14 people so far. I’d also like to pursue poetry in a serious way.

A: The broad theme of this memoir-- resonant today—is that there are so many of us in this beautiful country of the U.S. whose backgrounds are mixed in some way. There is intermarriage across culture and race. We travel. We stay in touch with people in other societies via the internet, WhatsApp calls, and so on. These are riches we have and should celebrate.

Not least—Deborah--thank you for this lovely opportunity to tell you about At the Narrow Waist of the World.