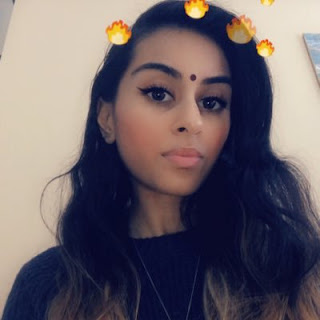 Samana Sajan is the author of the new poetry collection I Spoke with the Moon and This Is What She Told Me.

A: In a way, I’ve been writing this book over the course of my entire life. There are poems in this collection that are bred from the antiquity of my existence. I see this work as a journey towards unearthing my own consciousness; simply returning to who I Am.

The actual compilation took me about a year to complete. It would have taken longer had I not isolated myself from the outside world for months at a time. I spent much of the process locked away in Dubai, with merely myself and the Moon as company, where many distractions were kept at bay.

There are even some pieces that carry the ideas that came to me when I first picked up a pen. Writing and self-discovery is a live process, and it grows with you every day. Though the poems have been written and inked, I am still learning them and imbibing them at every moment.

I’d like to think that each poem has its own consciousness, and I as the poet, am writing it into its living practice constantly. If the poems themselves are living entities, then they are continuing to be written, even today.

Q: The book is divided into sections representing the phases of the moon. How did you decide on this arrangement for your poems? 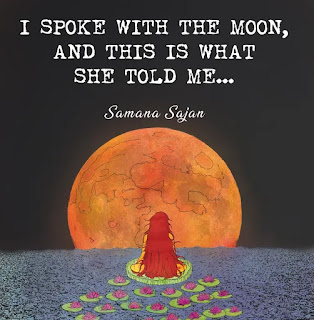 A: Yes, the book is divided into four sections following the cycles of the Moon: the new moon, the waxing moon, the full moon, and the waning moon. Given that the nature of the book is growth and evolution, when the concept of the lunar cycles came to me, I knew I had to use it. I wanted that outward cycle to take root and become an inner one.

Just as the baby emerges from the womb, I see the Moon as the Mother; the new moon operates as a womb for emergence and beginnings. Granted its nature and presence in mythology, folklore, and spirituality, the subtle body as well as the physical body in human beings is greatly in sync with the lunar tides, and as a result, greatly affected.

Just as the Moon sways the currents in the ocean, it engages with our bodies and minds in the same way, given that we are made up of 70 percent water. We mirror the cycle through our own growth; from infancy to adulthood, and ignorance to realization.

The poems begin in that incubation stage under the new moon. The waxing stage is the growth period. The full moon is the peak of existence, where you are operating in full force, experiencing in climax.

The final stage: the waning moon, is not to be mistaken for regression, but rather a stabilization of what was unearthed and manifested under the full moon; it comes after the discovery of consciousness and becomes a period of living within it eternally.

The poems move through this innate process, intended to align with the natural cycle of one’s own life. Taking all of this into account, I realized that the cycles of the Moon were greatly mirrored within our own selves, and I wanted to evoke this through my poems.

Q: As an actor and poet, how do the two forms coexist for you?

A: An artist tends to dabble in many art forms, regardless of their primary craft. Paint bleeds, ink bleeds, and art bleeds. As both a poet and actress, I have found that both forms have an interdependence, and I can draw from various elements within each to help strengthen the other faculty.

Already being compelled by poetry and film, my brain is mostly operating from the right lobe; meaning that I am a right brain thinker. I’m wired to think through art, so it is only natural for my thinking to filter itself through a lens of creativity.

You will see that with many artists, they tend to engage with other art forms to some degree, it is simply their natural gravitation. So, writing and acting flow together and coexist very easily, and enhances the other’s experience, because it allows one to tap into another artistic quality and add another dimension to their art, making it multi-dimensional.

A: The Moon is my biggest muse when it comes to my writing. Before I even found poetry, I found the Moon. I used to contemplate and meditate a lot on her. I found her to be my biggest confidante, source of strength, and feminine power.

I became very receptive to her energies and realized she had been the biggest witness to my life, she knew more about me than anyone or any living entity. She was the first thing, that taught me how to look within.

Her eyes have seen my pain, and her ominous light has carried me towards divinity. It was only natural for her to take form in my writing, and that is why I like to say that I write in the ink of moonlight. I found myself gazing upon her at night, and noticed the ink from my pen would flow almost uncontrollably.

It was through those nights of intense contemplation and conversation that much of the poems in the book were born. Much of the way I think and write is rooted in those moments.

The Moon was and continues to be my biggest muse, so it seemed only fitting to have her inhabit the core of this book. I wanted the reader to know that the collection behind the title went far beyond worldly endeavors, there was a darkness and esoteric hue present. These conversations were about moving away from worldly illusion and truly opening the gateway to self-discovery in the most spiritual sense.

I wanted the reader to understand that much of these poems would not be easy to digest, and would call for true destructive and purifying introspection. I was merely a vessel for the poetry to flow out of, and I thought “I Spoke with the Moon, And This is What She Told Me” encapsulated that essence perfectly.

A: More poems! I am constantly writing, any and every time inspiration strikes. Though this book has just come out, I am already getting started on the next one. My poems are constantly evolving, and I want to share that evolution with the world.

A: For every book of mine that is sold, my publisher (Waldorf Publishing) will be donating one book to a children’s hospital. So hopefully that will be more of an incentive to get yourself a copy, you’ll be contributing to a good cause! The book is available for purchase on my publisher’s website as well as on Amazon.

Also for those of you who have taken an interest in the book, please do leave a review! It really does go a long way.