Madeline Stevens is the author of the new novel Devotion, which focuses on a young woman who becomes a nanny for a wealthy family. Stevens is based in Los Angeles.

Q: You spent seven years as a nanny--how did your experiences affect the creation of your character Ella?

A: It’s difficult to work in a wealthy family's home—to live the way they live during the day and then go back to being poor every night. For years, working as a nanny, I imagined how I would have decorated my employers’ houses, the choices I would have made differently raising their children. It’s difficult to not live that sort of double life in your head when you’re surrounded by wealth.

When I started to write Devotion, I decided to let Ella fully feel everything I was trying to repress, and often act on it. I didn’t know what else to do with my envy. I had to shape it into something useful; otherwise it would have eaten me alive.

A: The novel went through a number of working titles before we landed on Devotion. I sold it under Small Night, which was taken from a Pablo Neruda poem: “and let your head of hair be a small night for me,/ a darkness of wet perfume enveloping me.” I loved the image from that poem because it was both sexual and maternal at the same time. 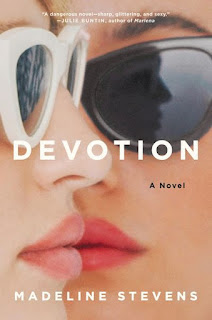 It also seemed a number of plot points happened in the middle of the night throughout the novel, but I had enough people ask me if it was “Small Night” or “Small Knight” when I talked about it out loud and realized it needed to change.

I asked everyone I knew to come up with alternatives. Some notable ones were So Long, Lonnie, Forgetting Lonnie, and Devour. In the end, my agent suggested Devotion. I was drawn to it because while Ella feels utterly devoted to Lonnie, the way the emotion tends to show itself looks more like betrayal. It holds a lot of narrative weight for one little word.

Q: The Kirkus Review of the novel describes your characters as "unstable and unreliable." What do you think of that description?

A: I was quite happy with that description. I love unreliable narrators. Any narrative device that teaches readers to question where the truth lies is vital. You can’t trust anyone in life—not completely, not all the time. You can’t even really trust yourself. Our own experiences are so colored by what we want to believe we're capable of.

There is no objective truth to the human experience. I think it’s important for literature to explore that.

Q: What do you think the novel says about money and privilege?

A: This is an excellent question with a complicated answer. I wasn’t trying to say any one thing, but rather explore these themes from multiple angles. I wanted to think about the impenetrable nature of wealth—the way you can be invited into the room, but if you weren’t born there you can just as easily have the door slammed in your face.

Ella is also a character who sits in the center of a spectrum of privilege. Lonnie has the most, while the women who were married to the local serial killer have the least.

Because she lies in the center Ella is lucky in a way she doesn’t even recognize. Though she spends most of the book wanting what she doesn’t have, she also moves the most freely, with both the world of poverty and the world of wealth barely touching her, while the other women are controlled and victimized to varying degrees.

I wanted to use Ella to explore the ways in which we often fail to recognize our own privileges, and the way that failing can lead us to victimize others.

A: I’m in the middle of a second novel right now. It’s another literary thriller, but with a very different angle. I won’t say much more because it’s unfinished and I’m a superstitious person!

A: I have a brilliant writing group who, in addition to my wonderful agent and editors, helped shape Devotion into its final form. A few of the members also have books you should check out. Our writing is all very diverse in style and subject matter--but your reading should be too!

I'd like to plug The Little Clan by Iris Martin Cohen, Salt Houses by Hala Alyan, and Please Read This Leaflet Carefully by Karen Havelin.