Marjan Kamali is the author of the new novel The Stationery Shop. She also has written the novel Together Tea. Born in Turkey to Iranian parents, she lives in the Boston area.

Q: How did you come up with the idea for The Stationery Shop, and for your character Roya?

A: I’ve always loved poking around in stationery shops and looking at all the different pens, paper, and notebooks.

My dad told me about a stationery shop in Tehran that sold books from all over the world. He said high school kids would hide love notes in between the pages of books and have the stationery shop owner pass on their messages to their beloveds in this way. I was intrigued by this gesture and kept it at the back of my mind.

Then I did a book event for my first novel, Together Tea, at an assisted living center. After the reading, we all sat down to a wonderful Persian lunch organized by the center (there is a lot of food in both my books!).

An elderly man in a wheelchair at our table kept saying how he’d met the prince of Spain and traveled with Charles De Gaulle. Others weren’t interested in hearing his repetitions. But before I left, I asked what his name was and was surprised that it was an Iranian name. 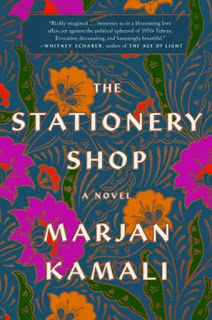 Weeks later when I visited my parents, I told them about this elderly man. When I said his name, my father said, “He was one of our most decorated foreign dignitaries. He met the prince of Spain. He traveled with Charles de Gaulle.”

I was stunned. That night I kept thinking about what it meant to be an elderly person in an assisted living center with a past that no one believed. Or, a past people believed but just didn’t care about. I knew then that I had the kernel for my next book.

I started with just the image of an elderly man in a wheelchair. But then I added the story of a great lost love and letters passed in books in a stationery shop.

The character of Roya became the love interest and took over much of the story. She meets Bahman in a stationery shop in 1953 Iran when they’re both 17. They fall madly in love and plan to get married but are separated on the eve of the country’s coup d’etat. Sixty years later, they reunite when Bahman is an elderly man in a wheelchair in an assisted living center.

A: I believe when you’re writing the first draft of a novel, you should just write whatever comes to mind without worrying about where it will appear in the final version. Anything at all should be captured and written down. That said, for the most part I wrote the chapters in the order that they appear in the novel.

But after the first draft, I went back and added many more 1953 scenes. And the emotional scene between Roya and Bahman that appears close to the end of the novel was one I wrote in a spiral notebook in a fever dream early on in the process. 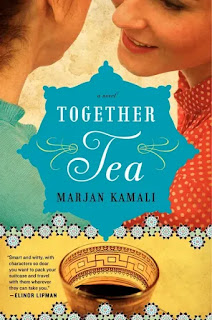 A: I knew that I wanted to have these two young lovers reunite after 60 years but I didn’t know what would happen once they did. The twists and turns that developed as I wrote took me by surprise.

After the first draft, I went back and made changes because I suddenly had layers to the plot that didn’t exist before. A few characters in this book did things that completely shocked me and I was breathless from the ride. It was an exhilarating, exhausting, and ultimately very rewarding process!

A: I am in that dreamy beginning stage of my third novel. I have a sense of the setting and the timelines and a few of the characters but it’s still just forming and gestating and bubbling up so that’s all I can say at the moment.

But I do know that like my two previous novels, it will take place in Iran and America. I can’t seem to quit these two countries and how their complicated relationship shapes the characters who live and struggle in both worlds.

A: Only that the response to The Stationery Shop has been one of the most rewarding experiences of my life. I never thought that the love story of two Iranian teenagers would touch so many readers.

I get emails and messages from readers telling me how much they cried, how much they learned, and a few saying they are now going to contact their first love. Some of the responses are deeply personal and I am very moved by them.