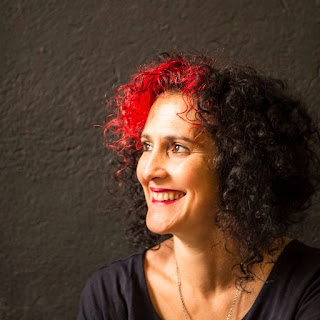 Benita Matofska is the author of the new book Generation Share: The Change-Makers Building the Sharing Economy. She is the founder of the group The People Who Share.

Q: How did you come up with the idea for Generation Share, and how did you select the people to include in the book?

A: I wanted to demonstrate the breadth of the Sharing Economy, its social impact and evidence how it is changing and saving lives. I believe that in order to change the world, we need to change the narrative and give visibility to the multitude of positive, stories of social change and community transformation that can be found in large numbers all over the world.

To change the world, we need to change the narrative and this book is a mission to achieve that.

“You only find things (or people) when you go looking for them. I went to look for Generation Share, for the brave, positive, change-makers. I intentionally sought out the positive stories, the stories of hope. Positivity is an important characteristic of the Sharing Economy because it provides a much-needed antidote to the disease of cynicism and negativity that is destroying our world. It’s the language of this new economy. It offers people healing, hope and inspiration, much needed at a time when hate, totalitarianism and populism are winning votes. We have a global crisis of responsible leadership and to tackle our complex problems, we need solution-focused, socially conscious, but above all, positive leaders – change-makers. I believe, that by elevating the status of good, positivity and consciousness, we can begin to change our malfunctioning world.” 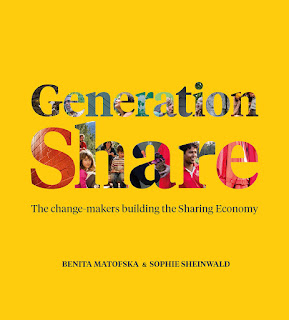 I wanted to tell the powerful human stories of change-makers worldwide, both extraordinary and ordinary people who, despite in some cases serious obstacles, are building communities and sharing in a variety of ways, demonstrating the power of sharing to transform our society.

I wanted to bring these stories to a wide audience, through powerful photography, so people could connect with these stories, to give them visibility and make the Sharing Economy accessible and tangible for people.

For this reason, I teamed up with photographer with purpose Sophie Sheinwald, as I knew she had the talent and skills needed to capture the spirit and humanity of Sharing on camera and make these positive stories visible. I wanted to better understand who these change-makers are; to explore the different demographics.

As I say in the book introduction:

“Generation Share isn’t about the system, it’s about the people who are creating the system and it’s the people who share that have long been my interest. I wrote this book because I wanted to know who was behind the Sharing since this is a people’s economy and it’s the people (the Sharers) who are building it. Collectively, these are the human beings I call, Generation Share. But who exactly are they? Are they young? Old? Rich? Poor? Women? Men? Non-binary? Disabled? Able-bodied? Do they belong to or come from particular religions, ethnicities or cultures? Do they live in cities? Villages? Or on islands? Are they artists? Anarchists? Entrepreneurs? Or everyday folk just doing their best?”

What I discovered on this three-year long journey as I explain in the conclusion:

“This is a pan-generational, pan-geographical, pan-economic, pan-gender group. They demonstrate explicitly that Sharing knows no boundaries. Generation Share, rather than a demographic, is a mind-set, a lifestyle that we can choose to adopt. It represents a new consciousness that is emerging, an awareness that consumption doesn’t lead to happiness or wellbeing, but that through Sharing and harnessing the power of technology for good, we can create a more equal, human, happy, healthy, resource- efficient, connected and sustainable economy.

What’s apparent is that Sharing is everywhere, if we look for it. It’s in our homes, our communities, our schools, our businesses, our cities, our villages. It’s within each of us, in unlimited supply. Sharing isn’t an age thing, a gender thing, a culture thing; it’s simply, a human thing. As Generation Share shows, to share is to be human.”

In terms of story selection, I used a number of techniques and approaches. Through my decade-long journey as a leader and global expert in the Sharing Economy, I had been fortunate enough to meet and hear about some extraordinary change-makers, sharing in a variety of ways.

In addition, through the work with the charity I set up, The People Who Share, and the campaign Global Sharing Week, I had developed relationships with a large number of Sharing organisations worldwide. For each location that we planned to visit, I also connected with key organisations who have a focus on sharing, sustainability, community, social enterprise.

These organisations in turn connected me to change-makers. UnLtd India, for example, introduced me to several change-makers in their network including Ashok Rathod, our Football Sharer, and Inir Pinheiro, our Village Sharer. In addition, there were stories that we discovered on our journey. Sophie Sheinwald met someone on the train who on hearing about Generation Share told her about Natasha Wood, our Laughter Sharer.

For each change-maker in the book, though, there are thousands of others we could have featured. The 200 change-makers who appear are really a taster of who is out there. Each person interviewed for the book was asked a simple question: “What does Sharing mean to you?” The result is an array of different perspectives, that each make up the whole and demonstrate the spectrum of the Sharing Economy.

Q: What do you see looking ahead when it comes to the sharing economy?

In the future, we’ll see an increase in Sharing activity that is specifically for environmental and social benefit. Much of this will come from the necessary response to the pressing issues of climate change and poverty. We’ll see innovations in ShareTech (technology for sharing resources) developed and delivered to bring sustainable social change.

Some of the bigger “unicorn” companies will also start to deliver social impact, whilst other new startups, community projects and individuals will begin to embrace sharing for the common good. Large corporations will come to the realization that the sole pursuit of profit will lead to their downfall and all organisations to survive will need to consider how they can create social and environmental value.

A: Generation Share is both my current and my next project. As the world tour so far has shown, in and of itself it is becoming a movement. To change the world, we need to change the narrative and this “Big Yellow Book of Hope” aims not only to inspire people to action, but also to change the focus away from what’s wrong with the world to what’s right with it.

The idea is to take Generation Share to as many towns, cities, rural areas in the world as possible, to show that the world over change is happening in a positive way and we need to give life and light to that. There are audiences worldwide that will be inspired by and identify as part of Generation Share. In parallel to our world book tour, we intend to create photography exhibitions, a film, build communities of Sharers. This is only the beginning.

A: The production of this book is important. We deliberately sought out a brave, change-maker publisher, aligned with the values of Generation Share. Policy Press have been incredibly collaborative and have worked with us to produce a high quality, ethical product, made from waste materials.

Each copy sold helps to educate a girl in the slums in Mumbai (via Aarti Naik’s Sakhi school for girls) and plant a tree (via the Eden Reforestation Project). The inks used in the book are organic and every aspect has been mindfully considered. The book is also designed and presented in a very accessible way, so people can connect with it.