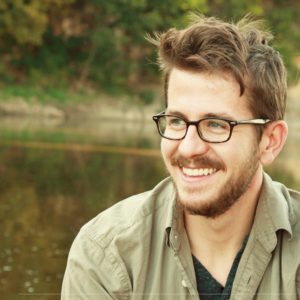 Eric Steven Zimmer is the author of the new book The Question Is "Why?": Stanford M. Adelstein: A Jewish Life in South Dakota. Zimmer is a senior historian at Vantage Point Historical Services, Inc., and is the co-author of the book Expanding the Energy Horizon. He is based in Rapid City, South Dakota.

Q: Why did you write this biography of philanthropist Stanford M. Adelstein?

A: This is one of those great questions that has several different answers, ranging from the pragmatic to the deeply personal. I’ll start with the former. In short, this project came to me through my now-employer, Vantage Point History.

When I was first approached about the book, I was just finishing my Ph.D. in the History Department at the University of Iowa. I was about to return home to spend a fellowship year finalizing my dissertation and wasn’t sure what to do next, so tried to keep my prospects open.

Sitting in my office in Schaeffer Hall, I received a call with the offer to come back to South Dakota, join Vantage Point, and launch my new gig with a book about Stan Adelstein.

I was new to the world of client-based history and to writing biographies, so it seemed like a great challenge. Now, almost four years later, I just feel very fortunate to have received this opportunity, and even more grateful that I wasn’t foolish enough to let it slip by!

Personally, however, I felt quite drawn to this project from the very start. Rapid City is a small place, and although I had met Stan Adelstein before, I didn’t know him well. And I knew very little about Jewish people, history, or culture, largely because South Dakota has such a small Jewish community. And I certainly hadn’t studied Jewish history in graduate school. I was curious about the chance to dive into a new subject. 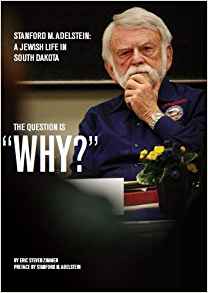 But, deep down, I also understood that because Stan was involved in various aspects of state and local politics and civic life in South Dakota—as it turns out, he was far more involved than I had ever imagined—this project would give me an excuse and an interesting new angle from which to explore the history of my community and region.

That’s part of the reason why the book offers such a deeply contextualized biography of Stan’s life, situating his family’s journey and his life story within broader historical contexts.

Q: How much did you work with him on the book, and what other research did you do?

A: The Question Is "Why?" is based on an enormous amount of research, including many extended oral history interviews with Adelstein and his friends, family members, and business associates. I read widely on a variety of topics—ranging from the history of Jewish immigration to the U.S., to U.S./Israeli affairs, to the history of the Black Hills, and state and national politics.

I also worked in several archives, most prominently Adelstein’s papers in his company’s private collection—some 80 boxes of correspondence, reports, and internal documents that captured Stan’s life. Several university archives and research institutions across the country also held papers relevant to the story, and Stan and some of his family members read drafts and made suggestions here and there, but almost always as a way to clarify a fact or story, or to fill in gaps left empty by the documentary record.

A: The title derives from a story Stan tells about a crystallizing moment in his life. Readers can get the full story on the interior flap of the book jacket or in the preface that Stan wrote.

But I’ll give the Cliff Notes: In the summer of 1965, Stan and his wife, Ita, were one of 22 young Jewish couples who visited Israel as part of the first outreach mission sponsored by the American Jewish Committee. At the time, the Jewish communities in the U.S. and Israel were struggling through some deep divisions, so this trip was, on its own, an important turning point in the relationship between these groups.

Former Israeli Prime Minister David Ben-Gurion attended one of the meet-and-greet events for the AJC mission. While Stan was in Israel, he had grown used to people being surprised to hear that there were Jewish people in South Dakota—many, in fact, didn’t even know where South Dakota was. So he had drawn a little map on a slip of paper, and when people would ask, he’d pull it out and show them where South Dakota was in relation to the rest of the U.S.

When Ben-Gurion approached Stan at the party, Adelstein nervously reached in his pocket, preparing to pull out his map. Sensing what Stan was about to do, Ben-Gurion walked over, put his hand up, and said something like “the question isn’t where you’re from, the question is why you live there.” A devoted Zionist, Ben-Gurion firmly believed that all Jewish people should move to Israel and help build the nascent state.

As he tells it, Stan surprised himself by saying, “It’s my mission as a Jew.” In other words, he felt that a long history of circumstance and chance had landed his family on the rural prairies of western South Dakota, and it was his mission to live out his Jewish values and preserve Jewish culture in that part of the world.

To Adelstein, this moment set the tone for his life’s work, so it made the perfect—and, we hope, evocative—title for his biography.

Q: How would you describe the Jewish community in South Dakota?

A: Small, welcoming, and humblingly persistent. South Dakota has historically had an extremely small Jewish population. In fact, it may be the state with the fewest Jewish people per capital of any state. Stan likes to point out to people that “South Dakota has fewer rabbis than U.S. senators.”

As a result, there’s very little historical material to work with, and when I started the project, I had virtually no knowledge of Jewish culture other than what a person gleans from movies and popular culture.

Rapid City has a small synagogue, called the Synagogue of the Hills, which Adelstein helped found in the 1960s. For decades, the congregation bounced around, meeting for the High Holidays, weddings, and funerals in the attics of local churches and in the mess halls of a nearby Air Force base.

For the last few years, they’ve been meeting in a small house that Adelstein donated, which happens to be a few blocks from my home. I’ve visited the synagogue a few times, attending holiday services, researching in their little library, and meeting with members of the congregation. I’ve rarely met a more genuine and warm group of people, nor one so dedicated to carving a little space to carry forth their spirituality on this predominately Christian landscape.

A: Oh, wow. As I mentioned earlier, I’m a consultant at a company called Vantage Point History, and we’re working on all kinds of fascinating projects. They include major museum exhibits for a couple of Native American tribes, an exhibit and interpretive tour centering on the history of brothels and sex work in Deadwood, South Dakota (yes, that Deadwood), and an oral history project for one of the largest philanthropic organizations in the world.

On the side, I’m also working on publishing my dissertation, “Red Earth Nation: Environment and Sovereignty in Modern Meskwaki History,” with a university press. That book offers a history of the Meskwaki Nation, a small Native American community in Iowa, and explores the possibilities of tribal land reclamation in the United States.

I’m also part of the Rapid City Indian Lands Project, an ongoing, volunteer research initiative looking at the history of property dispossession and urban segregation here in my hometown. We hope to draft a book-length writeup of that project in the next couple of years.

A: If it’s not too shameless of a plug, your readers can learn more about The Question is “Why?” by visiting here or looking up the book on Facebook. Also, anyone interested in my other project can visit here or here.

Finally, thanks so much for the chance to share a little about my work!