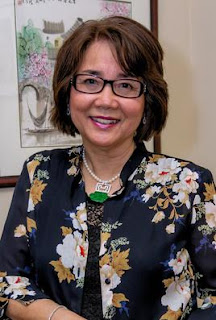 Ching Yeung Russell is the author of the new children's book House Without Walls, which focuses on two siblings, Lam and Dee Dee, who fled Vietnam in 1979. Russell's other books include Tofu Quilt and First Apple. Born in China, she lives in South Carolina.

Q: How did you first meet Lam and Dee Dee, and at what point did you decide to tell their story?


A: I met Lam first, probably at the end of the 1980s or early 1990s. I went to their Chinese restaurant, which had opened not long before, to look for a job as a hostess on weekend evenings. That’s how I met her.  She was very young and spoke Cantonese, the same language that I speak. That’s how I found out that she and Dee Dee, whom I met later, were boat people who had escaped in 1979 from Vietnam.


At first, it didn’t excite me that much, since I had heard a lot of those stories before. But later on, when we were better acquainted, they began to tell me, little by little, more details of how they escaped. Dee Dee especially gave me more information about what they went through. I was shocked, especially about their boat being towed back to the open sea. 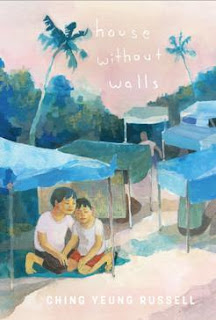 Their story wandered around in my mind for a couple of years. So I asked them if I could write about their story and they agreed. I interviewed them together and separately, off and on, several times. I asked them more and more questions, even when this book was about to be printed.


Dee Dee said that he wanted to put it all behind him, because it was so far in the past. But I am very thankful that he still answered my questions to enhance the accuracy of my book.


Q: The story is told in verse--why did you choose that format?


A: Free verse is my favorite writing style in Chinese, and I am good at it.  That’s why I wrote my two previous books — Tofu Quilt, published by Lee and Low Books, and Bungee Cord Hair, which was the winner of the 2012 Scholastic Asian Book Award and was published in Asia — in free verse. 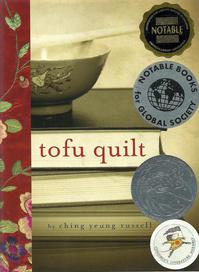 These two books also received more honors than my other books that I wrote in prose, such as First Apple, Water Ghost, Lichee Tree, and Child Bride. That’s why three years ago I converted House Without Walls from prose into free verse.


A: Besides listening to Lam and Dee Dee’s stories and others that I heard in the states, or read about on the Internet, I also went to visit a refugee camp in Hong Kong and got first-hand information from refugees about their escapes, plus a book written in Chinese regarding the life of the ethnic Chinese Vietnamese under the new government’s rules, which supported what Lam had told me.

I was surprised that in some cases, refugees had to stay in refugee camps for more than 10 years before being allowed to resettle in other countries or being sent back to Vietnam.

Q: Given that refugee issues are very much in the news right now, what do you hope readers take away from the book?

A: After listening to Lam and Dee Dee's stories, I have gained more sympathy, admiration, and respect for refugees from around the world--for what they have gone through, and how they struggle to start new lives in new countries, particularly for their children's future. I hope my readers will share these feelings, instead of mirroring what Lam was told when she first arrived in this country: "Go back to where you came from!"

A: I am working on a picture book regarding the Chinese dragon boat festival and a middle-grade novel about an 11-year-old messenger boy during the Japanese occupation of Hong Kong in 1945.

A: I studied Chinese literature in Hong Kong and wanted to be a novelist in Chinese. That’s why my Chinese writing used to be very good. In Hong Kong I was a published freelance writer. I also helped to revise my friends’ writings.


But now, it’s just the opposite.  I have to send off my Chinese writing to my friend to help me smooth it into perfect Chinese, not English-Chinese. As for my English writing, my husband helps me smooth my manuscripts into proper English, not Chinese-English. That’s why he is my first editor.