Betsy Aldredge and Carrie DuBois-Shaw are the authors of the new young adult novel Sasquatch, Love, and Other Imaginary Things, a modern-day retelling of Pride and Prejudice. Aldredge is the head of media relations for Purchase College, SUNY, and lives in New York. DuBois-Shaw is an arts administrator and lives in San Francisco.

Q: How did you come up with the idea for this YA novel that combines Pride and Prejudice and Bigfoot?

A: When we were brainstorming ideas for the novel, we kept coming back to the idea of a YA retelling of Pride and Prejudice.

However, having spent more time than we’d like to admit watching monster hunting documentary style TV like Finding Bigfoot, In Search Of, and Monster Quest, we were also quite obsessed with the idea of writing a book featuring Bigfoot. He’s a woefully neglected monster in YA literature, with vampires, werewolves, and zombies hogging the spotlight.

Then we realized that the two ideas didn’t have to be separate. The crisis in Pride and Prejudice is all about public embarrassment, and what’s better than reality TV for total humiliation?

So, we decided that Samantha (our version of Elizabeth Bennet) would have a family that’s just as embarrassing as the Bennets and she would be forced to join them in a search for Sasquatch on national television…not to mention in front of a cute boy.

Q: How did the two of you collaborate on the novel?

A: We start by brainstorming and tossing out ideas until something sparks for both of us. Then we create a detailed outline, working together to develop the characters, motivations, settings, conflicts, etc.

Betsy is a much better at facing down the blank page than Carrie, so she writes the first draft. Then Carrie attacks it with a wall chart of multi-colored post-it notes and refines the structure, pacing, and timelines.

After that, we send the manuscript back and forth between us, revising and rewriting, until we’re both satisfied. We also rely on the invaluable feedback we get from critique partners and beta readers. 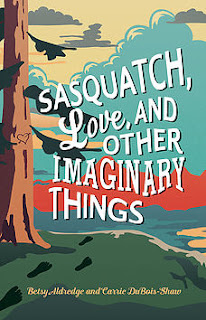 Q: Why did you choose to write for young adults?

A: We love the passion of young adult audiences. We also love the high stakes and deep emotion that are often inherent in stories about high school and that time of life when everything is changing. And/or maybe it’s because we were young adults ourselves when we first met and our teamwork and friendship is rooted in those exciting, drama-filled days.

A: Well, Jane Austen, of course. But here are some of our other favorites:

A: We’ve got a few things in the works including a humorous YA horror and a new YA romance. The benefit of being a writing duo is we can get twice as much work done.  And, we’d love to revisit the cryptozoology world at some point, if there’s interest in a companion book. We hear that Sasquatch has a few mythical friends worth exploring.

A: Here’s a fun fact. We met in college where we lived in a haunted dorm. More spooky facts, Carrie is a distant relative of Stephen King. Betsy grew up in the Salem Village area, on the land of John Proctor, who was hanged for witchcraft.