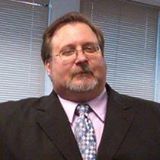 Chipp Reid is the author of the new book To the Walls of Derne: William Eaton, the Tripoli Coup, and the End of the First Barbary War. It focuses on the U.S. war with Tripoli and the Barbary pirates during the administration of Thomas Jefferson. Reid also has written a previous book about the war, Intrepid Sailors, as well as the book Lion in the Bay, about the War of 1812. He is a reporter, editor, and licensed ship captain.

Q: Why did you decide to write another book about the U.S. war with Tripoli and the Barbary pirates?

A: This book was always in the works. My publisher, the Naval Institute Press, was especially eager to continue telling this story as it holds a great deal of relevance to modern-day events.

However, what readers and the public in general must remember is the Barbary Pirates were NOT anything like the modern-day Islamofascist terrorist groups. The Barbary War was an economic conflict, with a whole lot of principles (such as freedom of the seas, open trade from the American standpoint, respect and possible independence from the Tripolitan standpoint) mixed in.

Plus, while my reviews on Intrepid Sailors: The Legacy of Preble’s Boys and the Tripoli Campaign have all been glowing, no one was particularly happy about how I ended the book. It was sort of cut short, so To the Walls of Derne was a logical extension of this same story.

I also wanted to find a new “hook” on the story, one that would break away from many of the books on the Barbary Wars that have come out since 9/11 – books that erroneously portray this as a “war on terror.” I believe I found some new ways of telling this story by weaving in the early history of the Marine Corps as well as fresh, and I think unbiased look, at the ruler of Tripoli, Yusuf Karamanli.

Q: How would you describe the state of the U.S. military at the time, particularly the Marine Corps?

A: The U.S. military was in a period of drastic reduction following the undeclared war with France, 1797-1801. Thomas Jefferson had some very strong ideas about military expenditures, as did his political allies in the House and Senate. 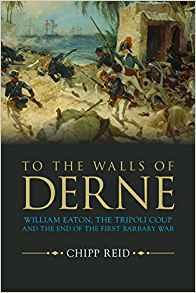 After growing to more than 30 warships, the U.S. Navy had just 13 ships available in 1801 – a number that would grow, but not every ship would be in service at the same time. The Marine Corps suffered just as much from the reduction in force.

As a new organization (the USMC came into being in 1798), the Marines were still searching for a foundation and way to prove themselves not only as viable and useful, but as money well spent. There was a clear sense that unless the Corps as a whole could prove its worth in combat, it faced an uncertain and dim future.

In addition, both the officer corps of both the Army (which played little to no role in the Tripoli war) and the Navy relied solely on seniority when it came to selecting commanders, rather than merit and ability.

Battlefield promotions certainly occurred, but as Jefferson’s first two selections as squadron commanders prove, as well his selection of Samuel Barron as the man to replace Edward Preble, the most senior officer was not necessarily the most capable. Jefferson had more than one opportunity to change this, but chose not to do so.

Finally, the Navy and Marine Corps faced manpower shortages as wages in both were notoriously low and not even the use of enlistment bonuses (called bounties) could induce enough recruits to completely fill a ship’s requirement for seamen or Marines.

Q: How would you assess the performance of Thomas Jefferson’s administration when it came to this conflict? 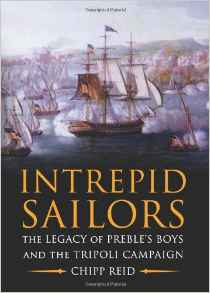 A: If I was to give Jefferson a grade for his handling of the Tripoli war, it would be a C+. As early as 1786, Jefferson called for a “coalition of the willing” (his exact words!) to fight the Barbary Pirates. When he got his chance to fight Tripoli, which most consider the weakest of the four Barbary States, he did so piecemeal.

Instead of reversing his economic decisions to drastically reduce the Navy and Marine Corps and send an overwhelming force to confront Yusuf Karamanli, he sent the Navy over a few ships at a time. As the war went on and the costs escalated, he began to look for any solution that would save some face for the U.S. and end the conflict.

Communications certainly hampered his efforts – it could take two months or longer for letters to move from the Mediterranean to Washington or vice versa. Still, his knee-jerk reaction to the loss of the frigate Philadelphia and decision to sack Preble as squadron commander certainly rank as among the worst military decisions of that period, as did his decision to pull the plug on William Eaton’s expedition to overthrow Yusuf Karamanli and replace him with his brother, Hamet.

Jefferson’s decision to give Tobias Lear carte blanche to negotiate a treaty was also a major mistake. Still, Jefferson was able to buy a peace for a time and Lear negotiated the best treaty a Western nation had yet to wrangle out of a Barbary State.

However, and this is something some of the latest authors tend to ignore, Jefferson continued to make tribute payments to Algiers, Morocco and Tunis, continuing the policy of appeasement and purchased peace, so he really was not, in any way, shape or form, the first president to combat terrorism – not by a long shot.

Q: How did you research this volume, and what did you learn that especially surprised you?

A: Research for Walls was an extension of six years of research I did for Intrepid Sailors, with the exception that I was able to obtain a number of sources from Libya before the National Library there closed its doors due to the civil war.

Those sources proved invaluable for their insight into Yusuf Karamanli, as did a number of Italian histories, which were Italian translations of older Arabic texts. Unfortunately, most Western (by that I mean American) histories of this period tend to portray Yusuf Karamanli as a mindless brute – due mainly to his utter contempt for his American prisoners and his treatment of them and Christians in general. 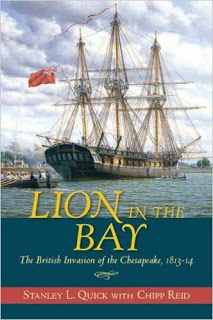 There was, however, so much more to Yusuf than has previously come out in print. In many ways, he was among the first Arab nationalists. Although Tripolitania was part of the Ottoman Empire, Karamanli had a very real notion to break from the Sultan and make Tripoli an independent nation.

Jefferson’s decision to back William Eaton’s coup attempt dramatically changed the scope of the war and, as Yusuf would point out several times in letters to Jefferson, Preble, and others, made the war about who would rule Tripoli. He was cunning, clever, ruthless – at times wildly popular with his people while at other times loathed and feared.

Hollywood could not invent a better character than Yusuf – he is Game of Thrones mixed with the Sopranos with a dose of Lawrence of Arabia all mixed together.

In addition to the Arabic and Italian sources, I once more relied heavily on primary sources as my means of “interviewing” the participants, and finding those sources, especially those of Lear and Samuel Barron, was challenging at times.

The folks at the Huntington Library in California, William & Mary in Williamsburg, Va., and the Beineke Library at Yale were all extremely helpful, as were the handful of research assistants I hired to track down documents.

A: Currently, I am wrapping up a biography of U.S. Navy Captain James Lawrence, the officer who gave the Navy the motto of “Don’t give up the ship.” Only one other biography of him exists, which his nephew wrote in 1898.

Thanks to some help from people in England, I was able to get all of Lawrence’s personal papers, which remain in a private family collection. Although at times one-sided as in many cases I am still trying to track down letters to which Lawrence replied, Lawrence’s papers are utterly fascinating and provide a huge deal insight into how he thought, not just what he thought.

Once this is done, I plan to take a few months off, then start research and writing a history of the Marine Corps 1798 through 1898, as told by the Marines who served in ship’s detachments during that period. Some of this research is already complete, and in more than a few cases, the Marines’ lives on ship bordered on the comical.

A: As with any topic, the Barbary Wars can often inflame passions. There IS a great deal about the conflicts that absolutely parallels what is happening today in the Middle East. However, it is VERY important to allow the facts to overcome prejudices and fears, which then allows for a much broader understanding of how the war of 1801-1805 is very, very different from the war that began on September 11, 2001.

--Interview with Deborah Kalb. Here's a previous Q&A with Chipp Reid.
Posted by Deborah Kalb at 6:46 AM