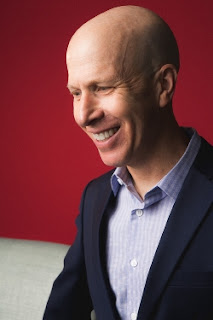 Jonathan Eig is the author of the new biography Ali: A Life, about Muhammad Ali. Eig's other books include Luckiest Man and Opening Day, and his work has appeared in a variety of publications, including The New York Times and The New Yorker. He lives in Chicago.

Q:  You note that one day you realized that despite Ali’s fame, no one had written an unauthorized biography of him. What made you decide to take on that task?

A: No one else was doing it, and I couldn’t think of anything that could be more fun or rewarding. Ali was my childhood hero, but as an adult I found even more exciting. His story touches on race, religion, politics, war…oh, and it’s got a little boxing in there too.

It seemed like the perfect moment, not only because of what’s happening culturally but also because so many of Ali’s contemporaries were still alive, including three of his four wives, his brother, several of his managers, and so on.

Q: What did the research involve for this book, and what type of cooperation did you receive from his relatives and friends? 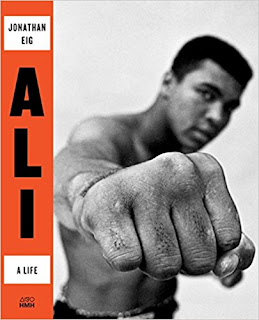 A: I interviewed more than 200 people, dug through Ali’s old business records, found court files showing that Ali’s grandfather was a convicted murderer, listened to old audiotaped interviews with Ali from the 1960s, got the FBI to release case files on Ali, did original research counting every punch of Ali’s career, and conducted a study with speech scientists at Arizona State University to measure the effect of all those punches on Ali’s speech rate.

And that’s just the tip of the iceberg. This was more than four years of work. I poured everything I had into this. Ali’s second and third wives sat for multiple long interviews. His fourth and final wife coached me and answered a few questions but declined to do a long session.

Some of his kids cooperated, some didn’t. Almost all his close friends and business associates agreed to interviews. With the exception of two or three people, I got interviews with everyone I wanted.

Q: You write, “The thing that surprised me the most was this: He was humble.” What accounts for the discrepancy between this quality and his public persona? 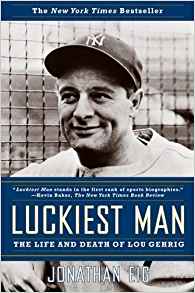 A: It’s true he had a massive ego. His personality bordered on narcissism. But he was also humble. That was part of Ali’s greatness—contained so many contradictions.

When I say he was humble, I mean that he showed genuine respect for others, especially strangers. He not only signed every autograph that was requested of him, he engaged with the people who approached him, and often formed lasting friendships.

He also humbled himself before God, and genuinely believed that his own importance paled in God’s light.

Q: What do you see as Ali’s legacy today?

A: Ali’s should be remembered as a fearless fighter—in and out of the ring, but mostly out of the ring. When black men and women in America were told to accept what they were given and keep their mouths shut, he spoke out. He said he would go to jail or face a firing squad if he couldn’t be free to express his opinions and worship his religion. 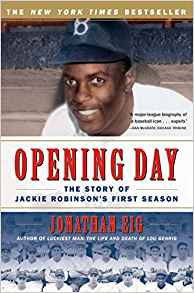 A: I’m working as a consultant on an Ali documentary by Ken Burns, Sarah Burns and David McMahon at Florentine Films. And I’m doing the first round of interviews on the next book, although I’m not yet announcing the subject. Oh, and I’ve started a series of books for readers in 7-to10-year-old range.

A: You should know that Ali marks my fifth book, and to me each one of them feels like a gift. I can’t believe I get to do this every day—and that I sometimes even get paid for it.

--Interview with Deborah Kalb. Here's a previous Q&A with Jonathan Eig.
Posted by Deborah Kalb at 7:16 AM