Q&A with Will Wootton

Will Wootton is the author of the new book Good Fortune Next Time: Life, Death, Irony, and the Administration of Very Small Colleges. He was the president of Sterling College in Vermont, and also worked at Marlboro College and Montserrat College of Art. His work has appeared in a variety of publications, including The Chronicle of Higher Education and the Burlington Free Press. He lives in Craftsbury Common, Vermont.

Q: You write, “This book began as a meditation in the style of a textbook…” Did you initially see it as a memoir?

A: Not at all. Initially I planned and began writing something closer to a textbook with literary ambitions, employable, I imagined, in graduate and undergraduate courses in non-profit management.

I began with mission statements, then moved on to boards of trustees and college governance. But really, I was off course almost immediately. I was citing statistics, documenting my research, but also telling stories. Once you start telling stories, those stories tell something about you, the writer, and even as you attempt to minimize that it affects everything.

There were only two paths forward: document and illustrate what I had learned using elaborate but usually laborious and tedious to read case studies of administrative practice, triumph, and folly, or draw upon my own experiences, which contained the same elements.

Just because I didn’t feel memoir apparently wasn’t enough to avoid it. With this realization and help from John Elder, a far more experienced writer, and then from an inquisitive and persistent editor/publisher, I succumbed to the reality of memoir and the course of writing began to take shape, and even make sense.

A: I didn’t, really. I learned to live with it. 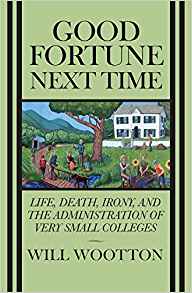 I had no intention to write about my father, for instance. But John Elder, had patiently helped me understand that it makes sense the reader wants to know something about the memoir writer. Less obvious, however, John spoke about how in the course of writing the writer is changed – that is, the act of writing changes the writer.

I would not have begun writing about my father had I not found myself writing about the importance of place – physical, geographic place – for small colleges, and realized I had some place-based issues in my life that were reflective of my father’s proclivity to move.

Towards something? Away from something? I wondered about that, and wrote it, finally understanding for myself a family mystery that ran from pre-war Japan, to Yale, to the High Rockies of Colorado.

Q: Did you need to do a lot of research to write the book, and what did you learn that especially surprised you?

A: Much of the research involved fact checking my own life and career. I discovered you can’t juggle chronology as I felt I had to unless you understand the actual chronological order of things, and that memory alone is a most unreliable source.

I discovered my research methodology was awkward and inefficient. Regarding subject matter – mission statements, for instance, or endowment campaigns or institutional marketing – I’d do some research generally to see where things stood, then start writing.

Then, when reading what I’d written, I’d say, “Does that happen that way?” Or, “Is that really fair to say?” And I’d have to back track and prove to myself what I had written.

Q: What changes did you see over the years you spent as a college president, and what do you see looking ahead for small colleges?

A: Yikes! What a question. The history, cultures, and practices of liberal arts higher education institutions of under, say, 600 students (of which there are about 500 in the nation) is in ways even more fascinating than the development of American higher education generally, which itself is reflective of every facet of U.S. history.

In this sense it’s notable that nearly all of today’s great colleges and universities were at one time, and often for a long time, small institutions.

I’m particularly interested in these small schools because of their (often) ruralness, wild diversity, curricula, and practice – their very Americanism – as well as their apparent fragility and dogged independence.

Their general reputation, however, suffers, not regarding the education students receive, but in the perceived economic unsustainability of the colleges themselves.

But I don’t believe small institutions are fundamentally any more uneconomical than higher education is in general. And if they were truly unsustainable due to their small size, they all would have closed mere decades into their lives. Instead, many small colleges are institutions of considerable age.

There are plenty of folks who despair when they perceive the future of small colleges: there are predictions that some large percentage of them will disappear in the near future. But a few things are clear to me, or clearer than they were even a few years ago.

First: Small colleges fail through short- and longer-term leadership failure on the part of boards of trustees, sometimes with and sometimes without presidential collusion.

Leadership failures that impact larger, bulkier institutions are absorbed like celestial bodies barreling into Jupiter. They create a little hole which is soon swept clean by the planet’s massive atmosphere. The same impact on my sorts of places can result in oblivion. Thus, an axiom: The smaller the institution, the greater the negative effect of leadership failure and institutional error.

But here’s the rub: Under the broad and friendly umbrella of the liberal arts, newly founded, independent colleges are as rare as moon rocks.

As far as I can tell, there hasn’t been a new undergraduate liberal arts college founded in New England in decades. Certainly, they are not popping up like rocks in a frost heave, as they were in the post WWII GI Bill higher education boon, to succeed or fail as their fate would have it.

That’s how startups work. But despite their overall success in providing a dynamic alternative to university-style undergraduate education, and in the face of a nation that breathes – or pretends to – entrepreneurship, few individuals today seem to have the drive or vision to try their hand and become a founder of a new college.

My research is not complete. Maybe it never will be. But I suspect this dearth of “foundership” – if you will – is as much cultural as it is financial and regulatory. It’s bound to be complicated, but what isn’t?

A: I’m absorbing the trauma of finishing this book. Other than that, for the past four or five years – the same length of time it took to write and get Good Fortune Next Time published – I’ve devoted an unconscionable amount of time to what used to be a slow-burning passion – sculpture. I get a similar intellectual satisfaction from making art as I do from writing. But I’m perceiving a difference.

If you are lucky enough to sell a piece of art, it goes away. There’s a good chance you’ll never see it again. That’s a good thing, as opposed to a book, which I suspect will never really go away. Already, I see sentences I’d change. I recall stories that should have been included. I’m seeing instructive opportunities missed. I’m thinking a finished book is like one of those magnifying mirrors in hotel bathrooms – I don’t want to look, but I do.

At the same time, I look forward to a new writing project. I’m tempted to try writing a novel. I outline plots and characters on a regular basis. I work on large sheets of paper and sketch timelines and notes. But really it’s just like before, I’m waiting for a voice and after that to get hooked, not like a fish, like a fisherman.