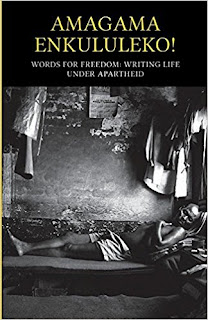 Joshua Maserow is the co-editor of Amagama Enkululeko!: Wordsfor Freedom: Writing Life Under Apartheid, a winner of the 2017 Children's Africana Book Awards. He is a contributing editor at publicseminar.org. He is a second-year psychology master’s student in the Psychotherapy Research Lab at the New School for Social Research.

Q: How was the idea for this book first suggested?

A: Brad Brockman, the former general secretary of Equal Education, approached me at the back-end of 2013 with an idea to develop a reader for an Equal Education end-of-year camp.

But before we get to the book itself it’s probably best to say a bit about Equal Education (EE) and its work. Equal Education is a democratically organized "movement of learners, parents, and teachers striving for quality and equality in South African education through analysis and activism."

Its school-going members, called equalizers, are predominantly black working-class students attending schools within an education system that has not managed to overturn – and in many respects, reproduces –  the far-reaching and awful legacy of apartheid and its deliberately disenfranchising Bantu education system.

Equal Education as a movement has a fundamental purpose: to provide a platform for black working-class students to mobilize for an improved and equal education system by holding the Department of Basic Education (DBE), and provincial education departments to account, using a variety of organizing strategies and tactics.

A lot of the movement’s core, day-to-day work revolves around political education and conscientization. High school students, from the ages of 14 to 18 or 19, meet on a weekly basis at youth group meetings. These meetings consist of discussions and interactive and informal educational programs. The primary focus of these meetings is Equal Education, particularly its campaigns, and the history and political economy of South Africa.

End-of-year camps are a fundamental part of EE’s educational process. Equalizers go away for a week to 10 days with their youth group facilitators, key members of the movement, who plan, facilitate and run these camps. Each day, time is set aside to read and engage with texts that are pertinent to South African history, global history with local resonances, the present moment, or to Equal Education’s campaigns.

Coming back to the book, we wanted to find texts that not only reflected particular changes to the social and political fabric of South African society as apartheid changed its face, codified segregation, and codified its oppressive ideology, but also detailed, in the voices of those maligned by the system, what it was like to be attacked by, and what it was like to resist, apartheid, its vast and repressive apparatus, and its ideologues.

As already noted, the book began as a reader for a camp in 2013, but only really became book project with the formation of the Internal Education and Training Unit (IETU) at Equal Education toward the end of 2014.  IETU’s mandate is to produce educational content – in the form of interactive educational activities, readings, pamphlets and books – for Equal Education members who participate in youth groups, parents’ meetings, and camps.

As a team, IETU decided to expand the reader into something more substantial. We worked on that, and began transforming it into a book in 2014. This entailed the usual demands of publishing – developing an editorial style, setting up copyright contracts, working with designers, finding a publisher, etc.

I think it's also important to note here that prior to this explicit publishing work many of the texts were read at a mid-year camp and at the EE Johannesburg branch offices, in 2014, as part of a weekly reading and discussion forum.

At the camp, we workshopped some of the texts with equalizers and asked, through surveys, what each equalizer felt were the most poignant texts and chapters and the ones they enjoyed the most.

While Daniel Sher, who co-edited the anthology, and I are recorded as the editors of the book, in many respects, each member of Equal Education who engaged with the stories, poems and other extracts played an indispensable role in choosing the texts that we eventually put in the book. As far as editorial processes generally go, it was democratic.

Based on the collective response to the texts during these two events, IETU decided that it was a promising publishing project that could have an impact not only within Equal Education structures but also beyond it.

Daniel and I then began selecting texts and developing the arc of each chapter, keeping in mind what we learned from equalizers regarding their preferences and ideas. Daniel has a background in history and I have a background in literature, so our respective interests dovetailed in productive ways, allowing us to contextualize the texts that eventually landed up in the anthology.

It also must be said here that the leadership of Equal Education really supported us through the long and often uncertain process of publishing this book. The thoughts of the current general secretary of Equal Education, Tshepo Motsepe, and the head of the policy & training department, Leanne Jansen-Thomas, can be found in the introduction and acknowledgements sections of the book respectively.

It is also vitally important that we acknowledge our publisher, Cover2Cover, and Dorothy Dyer and Angela Briggs in particular, who showed a lot of faith in this project when no other publishing house in the country would.

Q: Can you say more about how you picked the contributors?

A: There were three interlocking methods: we relied on suggestions from within Equal Education, as well as suggestions from our networks that extended beyond the movement; as mentioned before, we were guided by the input of equalizers; and we did a lot of reading.

Daniel and I initially began working together while based at the Equal Education Johannesburg office. It is near the Johannesburg city library, so we would take half days away from the office to unearth narratives from the South African literature section. For a few months, we spent hours finding authors and texts to read, some of which were familiar to us, and some of which we were reading for the first time.

Once we had accumulated a large enough archive of texts we began considering their potential fit to one, or more of the six chapters we had conceptualized. We tried to find texts that not only fitted in chronologically but also telescoped the texture of daily life commensurate with the various (always racist and oppressive) developmental phases that apartheid rolled through.

We were committed to finding texts that bore witness to the felt experience of particular people striving against injustice and oppression. So, we tried to find texts that focused on the deleterious social structural dimensions of apartheid from the perspective of particular lives.

A: I find this sort of question difficult to answer – in part, I think, because it runs against one of the organizing principles of the book: to place fictional, and some literary but non-fictional, texts in historical context. As soon as we start talking about general themes we bracket out a lot of the historical specificity we tried to include in the book.

Nevertheless, if it is important to talk about the book in terms of themes, its chapter breakdown may be a useful starting point. It’s divided into six chapters: Colonialism and Racial Capitalism, The Making of Apartheid, “Black Spots” and Forced Removals, Repression and Political Quiet, Black Consciousness and the Soweto Uprising, and Emergency and Revolt.

Thanks in large part to Daniel’s sharp knowledge of South African history (as well as the incisive suggestions of our manager at the time, Doron Isaacs), the chapters move lucidly through the 20th century until the late 1980s, and early 1990s, when mass mobilization was really strong and the apartheid government was on the brink of defeat. This movement through history is reflected in the changing concerns and voice of the narratives in the book.

A: I’ll answer this in a roundabout way. I think this book departs from other, new and old, available anthologies of South African literature in many respects. Each chapter is introduced by a short historical précis of the period it focuses on, in order to contextualize the texts.

Equalizers members were, and remain, the primary target audience; that was our initial thinking. Only after the positive response from within the movement did we realize that it might have broader appeal.

Our intention was to produce a text that introduced South African history by grounding it in the perspective of particular lives: we wanted it to communicate, insomuch as it can be achieved through narrative, the felt experience of the past – of South African history from early to late 20th century. We really wanted this book to take advantage of the truths narrative tells better than other modes of writing.

Also, we hoped that it might be able to fill a gap that isn’t being fully addressed in the formal public education system—most of the authors and texts in the anthology are not being read at school, despite their inarguable importance.

There’s a clear disjunction between what equalizers wanted to be reading and what’s made available through the South African publishing industry. You’re not going to go into a commercial bookshop and be able to find these texts, or very few of them. Many, in fact, have gone out of print.

Also, when they are present on a bookstand they are often far too expensive, pricing out the majority of South Africans from reading them. While you can find them in public libraries, these spaces are often hard to get to.

So, we really wanted to bring the book, and its content, to EE members (which we did, both through an online version and through the print copy). We wanted to make the book accessible, since the texts in it have great relevance today, not only as a historical artifact, but as important documents showing the continuation of certain dimensions of the past in present, as Zakes Mda points out in his wonderful foreword to the book.

The Book can be purchased online at Amazon and the African Books Collective.