Lauren Belfer is the author of the new novel And After the Fire. She also has written A Fierce Radiance and City of Light, and her work has appeared in a variety of publications, including The New York Times Book Review and The Washington Post Book World. She lives in New York City.

Q: How did you come up with the idea for your new novel, and why did you decide to focus on Bach’s work in particular?

A: I got the idea for the book about 10 years ago. I received in the mail an announcement for an adult ed class about the work of Johann Sebastian Bach.

At that point I didn’t know much about Bach’s work except for the piano lessons I was forced to go to as a girl, yet I had a hunch that I should take the class.

It turned out to be very important—I met my husband in that class! What I learned in the class surprised me. Bach’s music was more glorious that I imagined, but when we studied the sacred music I learned that some [of it] does lash out at Catholics, Jews, Muslims, even Protestants of different denominations.

Bach was ordained as a minister of music in the Lutheran Church, and it was not a time of religious tolerance. To learn of the problematic pieces did not altogether surprise me given his era, but it was disturbing to me, [having] Jewish members of my family murdered during the war.

At the same time there were news stories about works of art stolen and discovered from World War II. Maybe because of my family’s history, what happened in the war, I read these stories and they were compelling to me.

One day I was walking to the subway after class, and an idea popped in my head—what if I were to find a work of art stolen after the war, but what if it was not a painting but music by Johann Sebastian Bach, and what if it was inflammatory?

That was the moment it all began! It seems all my novels begin in that way…

Q: The book takes place over more than two centuries. How did you research it, and did you have a preference when it came to writing the present-day or historical chapters?

A: I worked on the book for many years, and I did very intensive research. I decided the book would begin at the end of the Second World War. An American Jewish soldier in Germany discovers a cantata.

My first research was into what Germany was like at the end of the war, and what the experience was like for American Jewish soldiers.

What is the cantata’s history? The novel traces its history. I began reading about Bach and his family, and discovered an extraordinary woman, Sara Levy. She was a student of Bach’s son.

Once I discovered her, her world opened before me, entering into the world of salons of Jewish women around 1800. Salons in Berlin were different from others in Europe—they were primarily organized by Jewish women, and Christians and Jews, aristocrats and commoners all gathered there.

They could discuss cultural issues, have musical performances—it was exciting material.

Q: And did you have any preference in terms of the eras you were writing about?

That’s important to me, particularly in the character of Fanny Mendelssohn. Scholars have one idea of what her life was like. As I went back, I read diaries and letters from the time. I like to go back and put myself into the shoes of the characters, experiencing life as they must have.

As I investigated Fanny Mendelssohn’s life, I was really surprised. Modern-day historians will say she was suppressed because she was a woman, but in fact as I read the letters, for Fanny that was not true. Her husband and her mother urged her to publish her music.

She wouldn’t have if it would have damaged the family’s reputation. Why she hesitated became something I fixated on. I don’t know that I ever found an answer.

Q: You’ve noted that the title alludes to both the Holocaust and a biblical passage. Can you say more about this? 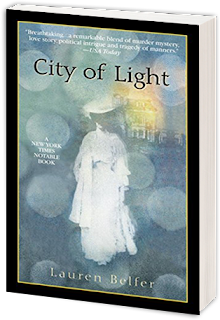 A: The title brings together many different strands of the book, at least for me! Many readers have asked me [about it]. The title is from the Book of Kings. Felix Mendelssohn uses it in the oratorio of Elijah.

When Felix died, his brother-in-law, Wilhelm Hensel, went to Felix’s deathbed, and did a portrait of him, which was the custom, and wrote a passage from the Bible that includes this phrase. When I read about that, I was very struck by it.

The original word for Holocaust was a consuming fire. One question for me as I wrote the book was what happened to the people who remain after the fire, their children and grandchildren? Can they reconcile themselves to what happened?

All the present-day characters are trying to come to terms with the war. To me, it’s all expressed by the phrase “after the fire.”

Q: In a novel that includes both historical and fictional characters, what do you see as the right blend of the two?

A: It’s an interesting question. All the contemporary characters are fictional. When I looked at the past, I tried when possible to use real people or people who might have been [involved].

I got to the point where Paul Mendelssohn gives the cantata to Dr. Werner, and Dr. Werner is a fictional character, and the other characters in Germany are fictional from that point.

The Mendelssohn family does exist and doesn’t have this cantata! I was ending the real-life characters with Paul…and then the cantata goes into fictional hands.

A: I am involved with another book. I get very superstitious so I’m not going to say anything! I’m beginning a national tour with the Jewish Book Council, and it’s very exciting to be traveling to different cities.

A: One thing that struck me as I’ve gone to speak at synagogues—people really don’t know this story about the role of Jewish women in Berlin around 1800. It’s a fascinating story. Women were pivotal figures in the history of Germany in this period.

It’s wonderful for me to be able to share it, and for the word to get out [about] the role these astonishing women played.

--Interview with Deborah Kalb. Lauren Belfer is participating in The Lessans Family Annual Book Festival at the Bender JCC of Greater Washington, which runs from Nov. 3-13, 2016.
Posted by Deborah Kalb at 5:12 AM