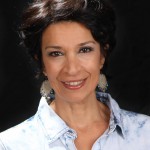 Cynthia Kaplan Shamash is the author of The Strangers We Became: Lessons in Exile from One of Iraq's Last Jews. Born in Iraq, she also lived in the Netherlands and England, and now resides in New York.

Q: Why did you decide to write this memoir about your experiences as a child?

A: The thought of writing my story needed time—I wasn’t even aware it was a story until I spoke to people and they said, Wow, what a life! I grew up thinking everybody went through something like that.

I didn’t want to talk about it. I wanted to be like everybody else…be like the other Americans. What prompted me eventually was my kids were confused, and were asking me if I had converted from Islam.

In the yeshiva they don’t talk about Jews from Arab countries. I realized I had to explain to them where I was from…

Q: At a time when immigrants and refugees are a major theme in American politics, are there ways in which you see your own experience as part of a universal immigrant experience?

A: Yes, of course the reason I am an immigrant may be different, but the individual story is the same—they are leaving humbled, destabilized, uprooted. The only difference may be that there are more of them than we were. Jews from Arab countries are not in the limelight.

Their lives, I can relate to. After they’re uprooted, the ramifications of being uprooted are much bigger than you think. After you find an apartment and settle, you are not settled.

The Torah says God said to Abraham, leave your country, you will have cattle, you will multiply. Still, it was hard for Abraham to leave. Leaving your roots is the hardest thing. The ramifications never end.

For me, I was the lucky one. For my mother and older people it was much harder. By the time they find their lives, the reality is that they are getting much older.

In that sense, I completely identify with the refugees. I know there are a few sour apples. But I’m looking at the pictures of refugees leaving Mosul, and the children are all barefoot. I thought maybe I would start an initiative to send shoes. 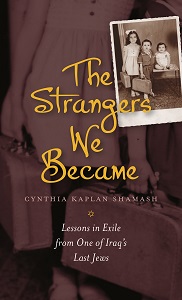 Q: What are some of the most common perceptions and misperceptions about the history of the Jewish community in Iraq, and how many Jews are left there today?

A: There are four Jews left now. They are in their 90s. In the 1920s, 25 percent of Baghdad was Jewish. It goes to show what dictatorship can do to a country. Now they are craving to have the Jews back.

On Rosh Hashanah a friend put a video on Facebook—the Muslim New Year coincides with Rosh Hashanah, and he wanted to wish them a happy new year. He still feels Iraqi. He called me—two million Iraqis reached out to him, from Facebook and letters. They would want the Jews back.

They built the country. Immigrants—it’s not like they’re going to destroy the country, they can contribute. There is enough space for everybody. There’s so much hate—the fear of not having enough if somebody comes in. The opposite is true…

Q: What do people know about the Jewish community in Iraq?

A: Since 1948, Iraqi Jews are not known. Before the Iran-Iraq War, I would say I was from Iraq, and people would say, Do you speak Persian?

It is very uncommon. Especially Jews—Jews from Iraq weren’t common. The curse of that is when we went to different countries, we didn’t have comfort in a group setting. We were very diluted.

We were not many in numbers, but also the Iraqi Jews left over a longer period of time. The very affluent left in the 1930s; if they went to the U.S. it was already second generation [by the time later groups arrived].

Within the Iraqi community we didn’t have a social structure abroad. We did find comfort in our building in Holland. We were like one big family. It was a big comfort, though we spoke about nothing. We put on music, danced, laughed, and went home. My mother’s friend named her living room [after a] very famous Baghdad coffee house. Humor helps a lot.

A: I went through many titles and then I said, What is the essence? I was discussing it with my mother. She said, we became uprooted, and strange. Something clicked. That’s how she feels. I wrote that when a Dutch girl opened the door and we were invited for Christmas…and she sees us at the door and she said, The strange people are here. Children say the truth.

The feeling of estrangement is in nuances. It’s like building a house. Everything is up on the outside, and then you go in, and the electricity and pipes--that is what takes forever. I feel the same way. The outside may look settled, but the inside takes time.

Q: You write, “My family fled Iraq in order to live our religious lives freely.” Throughout the book, you describe your emotions about religion. What role does religion play for you today?

A: There are a few articles on my website where I describe how estranged we felt about that aspect too. Jews from Iraq—we did not have Reform and Conservative. Jews are Jews. We didn’t have that segregation.

When we went to Holland, it was Yom Kippur and we went to a synagogue. They had a coffee break and a piano. We thought, this is how Jews practice in Holland. We had no concept of Reform or Conservative.

Now I’m semi-Orthodox. It is more Ashkenazi that’s Orthodox. I felt also estranged from [it]…I went to a Dutch Jewish school and still did not feel at home. After all, this is what we left for. Then my grades were not good enough to be accepted at the Jewish school. That’s why my mother sent me to England…

Here, now, in the Orthodox community, [one is] judged by, Does he wear a white shirt? A knitted yarmulke? I explain to my mother; she doesn’t get it. I don’t either. As happy as I am to be living freely, it’s too bad there is this type of choice.

A: Yes. I’m not working on the book, the book is working on me! I’m really thankful to the pages. They ground me. I am writing about a time when Iraq was established and the influence of England in Iraq.

It’s a story—fiction—the historic facts are the facts, so I have to do a lot of research. It is a fascinating time. It’s almost a precursor of what happened during the [U.S.] invasion. The British went in not knowing the culture, putting their seal and footprint on something that was not appreciated there. Fueled by greed for oil, they gave their culture, and thought it would be appreciated…

I am trying to weave in the British influence and the effect it had on the Jews also. [The British] built [a school] in 1919 where my father went, and they wanted assimilation to British culture through the Jews.

The Jews became more modern and very British. They dressed like the British and didn’t wear yarmulkes any more. It got them in trouble—they became envied as if they were loyal to Britain, even though they were patriotic.

It resulted, in 1941, in the biggest slaughter of Iraqi Jews. In two days, 180 Jews were murdered. Women were violated, babies killed. My mother and father were alive and told me stories about it. The Iraqis felt we were on the side of the British and were trying to take over the country.

A: I hope my story evokes compassion for the unknown...it’s hard to imagine somebody had a rich life and deep roots when you see them at this point in their life [as a refugee] with one bag in their hand and hardly any clean clothing, looking disheveled.

It’s human nature to think this person is no big deal. I hope the book is an eye-opener to respect people no matter what point in life they are, and give them dignity. When you give them dignity they can share; when you don’t you are burying them alive.

I don’t care what religion they are; people are people. Forty-one times in the Torah it says, Be kind to strangers because you were strangers in a strange land. Why mention it so many times? They know this is human nature. They don’t say please eat, [they know] you eat. It does say, Be kind to strangers.

They are extremely sensitive. It’s not human nature to be aware of it. I hope this gives a little depth in the book.

--Interview with Deborah Kalb. Cynthia Kaplan Shamash will be participating in The Lessans Family Annual Book Festival at the Bender JCC of Greater Washington, which runs from Nov. 3-13, 2016.
Posted by Deborah Kalb at 6:03 AM