Matthew Olshan is the author of the new children's picture book A Voyage in the Clouds: The (Mostly) True Story of the First International Flight by Balloon in 1785. His other books include The Mighty Lalouche and Marshlands. He lives in Baltimore, Maryland.

Q: How did you come up with the idea for A Voyage in the Clouds, and what particularly surprised you as you researched the book?

A: Like many children, I was fascinated by flight. My fingers were perpetually sticky with Testors paint and blistered from the sharp edges of plastic wind-up propellers.

I often found myself dreaming about flying, sometimes under my own wing-power (I felt a certain kinship with bats), other times buzzing the treetops in some rickety, canvas-covered contraption. I was 9 when the National Air and Space Museum opened in 1976. I spent many delirious afternoons in that temple of aviation.

My passion for flying waned as I grew older and the tedious reality of airports and airlines set in. But several years ago, I decided to use part of a small inheritance to learn how to fly a real plane.

I enjoyed the training and was eventually certified as a Private Pilot, but general aviation in the Baltimore/Washington area is not for the faint of heart. Much of the airspace was restricted after the 9/11 terrorist attacks, and a simple error of communication can still get you intercepted by F-16s or Blackhawk helicopters.

The process of becoming a pilot rekindled my old love of flight, and my research into the early history of aviation turned up an extraordinary -- and extraordinarily rare -- monograph from 1786: Two Aerial Voyages of Dr. Jeffries with Mons. Blanchard. 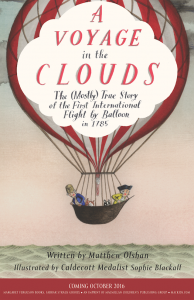 This account, written by Dr. John Jeffries and presented to the Royal Society, became the inspiration and primary historical source for A Voyage in the Clouds.

Q: The subtitle describes it as a “(mostly) true story.” What did you see as the right blend of the historical facts and your own imagination?

A: The phrase you singled out from the subtitle -- "(mostly) true" -- is a source of lively conversation about the book. Roger Sutton of The Horn Book wrote an editorial on this very subject in his blog,…in which he describes the challenge for a reviewer in properly categorizing A Voyage in the Clouds; i.e., can a book that characterizes itself as "mostly true" be considered "non-fiction?"

My story was certainly inspired by the flight of Jeffries and Blanchard; most of the events in the story actually happened as they're described, as I explain in the Author's Note. But I did take a few liberties in the interest of keeping young readers engaged.

If a book is to be presented as "non-fiction" or taught in classrooms as "history," I think an author has a responsibility to volunteer the fact that he has departed from the historical record.

But even a story that hews as closely as possible to historical facts as they've been received and strives mightily to represent the "factual" is going to wind up being fiction, to a certain degree, if only by depicting the modern author's impossible intimacy with his protagonists. 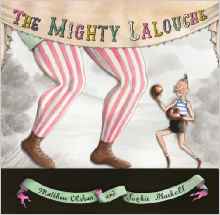 The author can't have known them, but it's essential to his "authority" that he seem to have.

My first collaboration with Sophie Blackall, The Mighty Lalouche, which certainly had an air of historical verisimilitude, raised similar questions, even though it was pretty clear that the story was rooted in fantasy.

My next children's book, which is set in Jamaica in the mid-19th century, is much more fact than fantasy. But even in that story, I make certain imaginative leaps. So I guess you could say that the blurred line between "historical fact" and "historical fiction" interests me greatly!

Q: At what point in the process did you see the illustrations, and what do you think they add to the story?

A: Sophie Blackall is an extremely talented -- and very busy -- illustrator. I didn't see any of her artwork for a long time -- maybe a couple of years? -- after the story was finalized.

Sophie is known for her meticulous research, which, in a few cases, actually drove some revisions. I remember, for instance, a long back-and-forth about whether it was feasible for the balloonists to own and use a wrench, which was a fairly newfangled tool in 1785, and, if so, what kind... 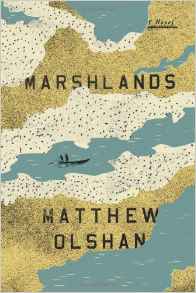 As for what the illustrations "add" to the story, I'd simply remind your readers that children's books are primarily visual in their impact; that the illustrations are pretty much the main event; and that Sophie's artwork has brought the story to life in a joyful and brilliant way, far beyond my imagining.

It was pretty clear to me when I met her that she was destined to win the Caldecott Medal someday. Little did I know it would happen the same year our balloon book came out!

Q: You’ve written for different age groups. Does your writing process change depending on your audience?

A: It's true that I've written for different age groups. Sometimes I wonder what a children's story like A Voyage in the Clouds has in common with my harrowing adult novel Marshlands -- or what either book has in common with Finn, a novel I wrote that found an audience with teenagers. I suppose they're all products of a very deep curiosity about the world coupled with a kind of literary restlessness.

I'm not sure how to answer your question about my writing process, which seems to change with each new piece of writing. I am aware of writing in different registers for young readers as opposed to experienced readers. But there are certain commonalities. For instance, a reader of any age deserves clarity, originality, and honesty.

A: At any given time, I'm working on several projects at once. I see it as a form of "R&D." A children's story, perhaps. An adult novel. Lately I've been experimenting with screenplays. For me, the problem is an overabundance of ideas and material.

But eventually, something will "take" and for a while it'll become my sole obsession. It's a messy, wasteful process. Sometimes I chase an idea down a rabbit hole -- for years -- with very little to show for it when I come up for air. I have a novelist friend whose mantra is, "Nothing is wasted." Oh, how I hope that's true!

A: If your readers would like to know more about me or my books, I'd invite them to my website. In addition to information about my literary life, there's an archive of about 250 weekly op-eds I wrote for the Perry County Times in southcentral Pennsylvania -- and sometimes for papers with a slightly larger circulation.

--Interview with Deborah Kalb. Matthew Olshan will be appearing at Politics & Prose bookstore in Washington, D.C, on Thursday, Oct. 13, at 7pm.