Kem Knapp Sawyer is the author of many books for young people, including biographies of Nelson Mandela, Anne Frank, Lucretia Mott, Mohandas Gandhi, and Eleanor Roosevelt. She is also a contributing editor at the Pulitzer Center on Crisis Reporting. She lives in Washington, D.C.

Q: One of your books for young people is a biography of Nelson Mandela, who recently died at age 95. Why did you decide to write about Mandela?
A: What is it about Mandela? The generosity of spirit, the dogged pursuit of truth and reconciliation, the willingness, or rather the ability, to forgive? 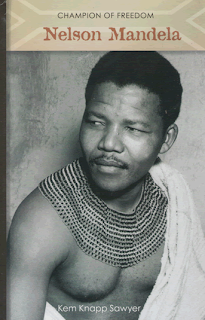 All of this drew me to Mandela, but there was also the puzzle of his imperfections and the details of his personal journey—a father who was a village chief and husband to four wives, an early childhood spent herding cattle and sheep, a facility for debate and an affinity for ballroom dancing.

Then too it was the winning smile, his wisdom in supporting the (almost) all-white Springboks rugby team, and his command of language: “There is no time to pause. The long walk is not yet over. The prize of a better life has yet to be won.”

Q: Why did you choose to write for young readers, and what do you try to focus on in your biographies that you feel would especially interest them?

A: Looking back I don’t remember thinking that I was making a momentous decision. I wrote my first book for young readers and just kept going. One of my first jobs was teaching English and directing plays at Crossroads Junior High School in St. Louis. I loved working with young people and still do.

I try to figure out what gave my subjects the ambition and the drive to set out to change the world. And I like to focus on what they were like when they were young before they went on to become leaders. 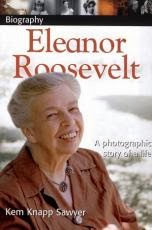 I also look for details that may surprise readers. When I wrote about Eleanor Roosevelt I wanted to show how shy and awkward Eleanor was as a child. Everyone called her “Granny” when she was little. It wasn’t until she went to boarding school in England that she came into her own.

She went on to become a political activist and later, while FDR was governor, she commuted from Albany to New York City to teach civics class. She became an independent and energetic First Lady, “the eyes and ears” of the president, a daily columnist and the person responsible for the Universal Declaration of Human Rights. 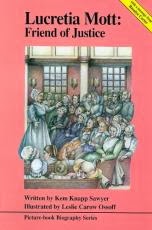 Q: How do you pick the subjects of the biographies you write?

For my first biography I chose Lucretia Mott, the Quaker abolitionist and women’s rights advocate, because of her strong belief in non-violence. I wanted young people to understand that those who embrace non-violence are usually forces to reckon with. It was Lucretia Mott who said, “I am no advocate of passivity. Quakerism as I understand it does not mean quietism.”

I started out writing mostly about women who are committed to social justice. We had three daughters and I wanted them to be inspired. Then we had a grandson and I wanted to branch out… So I wrote about Gandhi. 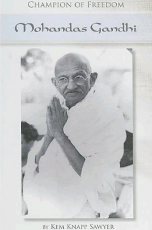 I can’t claim that I chose all of my biography subjects. An editor at DK (Dorling Kindersley) came to me and asked me to write about Anne Frank. That turned out to be one of the most intense writing experiences I have ever had—the subject matter deeply emotional and the research surprisingly rewarding. 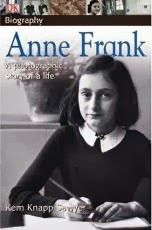 I spent time in the library at the Anne Frank House in Amsterdam where I held the photo albums Otto, Anne’s father, had made when his children were little. I stood outside the apartment building where the Franks had lived before they went into hiding. I read the first-person accounts Anne’s friends and helpers had written.

Q: You've also contributed to a travel guide to Washington, D.C. What are some of the highlights you chose to include? 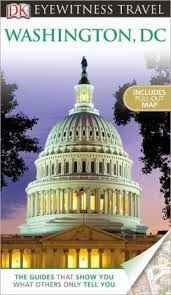 A: I contributed the history chapter as well as the “Three Guided Walks” for the Washington, D.C., Eyewitness Travel Guide. It was great fun to walk up and down Massachusetts Avenue and around Kalorama as part of my research for the Embassy Row walk.

And since I love history it was also wonderful to plot routes for the Alexandria and Georgetown walks. I would lie awake at night trying to figure out how one could see the greatest number of architectural landmarks while making the fewest turns.

A: I’m working on two books now. One is about child soldiers in different countries around the world. It’s about their recruitment into the army as well as the difficulties they face once the war is over. The communities and villages where they grew up will often refuse to accept them. Most are rejected, stranded and abandoned.

My other book is a historical novel called Letters to Fiona. It’s about an Irish immigrant who comes to New York in 1848. She loses her father on the ocean voyage, lives with nuns at the House of Mercy (some harsher than others), and takes a job as a hired-out girl for the Harper family. She falls in love with the Harpers' son, only to be abruptly dismissed by Mrs. Harper.

I’m also in the ideas-rattling-in-my-head/very-early-research phase for two other projects. The first is a biography of Horace and Mary Mann—Horace, the politician and educator, reformer and abolitionist, and Mary, his wife, a writer, teacher, and one of the three fabled “Peabody sisters” of New England.

The second project is a one-woman play that tells the story of Vera Brittain, the British writer and pacifist who lost both her fiancé and her brother in World War I. 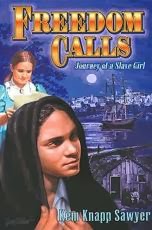 A: I’ve written one novel, Freedom Calls: Journey of a Slave Girl, the story of the friendship between the daughter of Gamaliel Bailey (the real-life publisher of the abolitionist newspaper, the National Era) and a young girl who escapes from slavery.

Freedom Calls is based on a true incident from 1848—the escape of 76 slaves from a Georgetown harbor and their capture aboard the Pearl. Theirs was a foiled plot but one that tells a lot about our nation’s history and the bravery of its people.

While doing my research I found handwritten records of the captain of the Pearl in the stacks of the National Archives, the unmarked graves of the Bailey family, and Cornfield Harbor, the spot where the Pearl was captured.

And one more thing: I work part-time at the Pulitzer Center, an organization started by my husband to support international journalism and education. I mentor our “student fellows” who receive travel grants to do international reporting projects. I also do my own reporting on youth in developing countries, including profiles of children.