Emily Jeanne Miller is the author of the novel Brand New Human Being. She has worked as a journalist in California and the Rocky Mountains, and is the co-editor of The River We Carry With Us. She lives in Washington, D.C.

Q: How did you come up with your main character, Logan, and why did you decide to write from a male perspective?

A: Logan—or really, the book’s narrative voice—was the product of a long, non-linear process. He first appeared in a 12-page short story I wrote in graduate school, around 2001.

The story, which I wrote in the third person, involved a father who, after learning of his wife’s infidelity, takes off with their young son. The pair lands at a seedy motel, where they swim in a hot-springs pool, and after some reconsideration on Logan’s part, head home.

In late 2009 I started writing from Logan’s point of view in the first-person, present tense, and that felt like a breakthrough. In his voice, the story took on new energy, and I ran with that. I kept running—or writing—for almost a year, until the first draft was done.

For me, the excitement of fiction, as both reader and writer, comes from seeing the world through the eyes of people who aren’t me, and I decided to write from Logan’s—a man’s—perspective for precisely that reason; telling the story in his voice felt exciting, like I was constantly making discoveries.

If I got stuck, I focused on the things Logan and I had in common (i.e. a bungalow house, a dog, a somewhat cranky nature) instead of the things we didn’t (almost everything else). It was actually quite fun.

Q: Your website describes Brand New Human Being as being in part about "the road from child to parent," and father-son relationships play a big role in this book. How does the dynamic between Logan and his father, Gus, affect Logan's relationship with his young son, Owen? 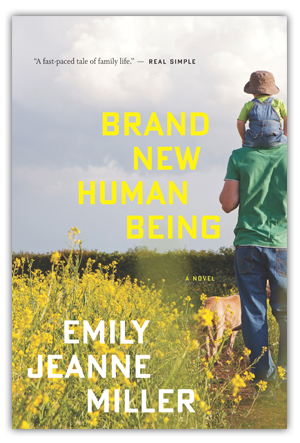 A: You’ve basically put your finger on the book’s central theme. Logan—like each of us—is shaped by his childhood, which in his case was dominated by his father, a man he revered, loved, and resented at the same time.

When Gus is taken away, it’s as if his operating system suddenly fails. Not only is he left with no one to revere, he has no one to resent, and he sort of goes haywire. He’s so confused about his father that he’s having trouble being a father himself.

I’m so fascinated by how our parents influence us, consciously and un-, and in what we bring to bear on our children, in turn. How this inevitable—and sometimes deeply unhealthy—cycle continues, shaping people’s psyches and their lives, generation after generation. It’s kind of mind-blowing, when you think about it.

Q: Why did you choose Brand New Human Being as the book's title?

A: Actually, I didn’t. The original title was Gold, but my agent thought that didn’t give enough of an idea of what the book was, so after some brainstorming, we sold it as After Augustus.

Then, as the cover was being developed, there were some concerns about how that title would work with the images they wanted, so we went back to the drawing board, and someone at HMH suggested Brand New Human Being, taken from a line from the book in which Logan is thinking about the randomness of Owen’s conception—of all life, I guess.

Over the course of the novel though, and certainly by the end, the central “brand new human being” is Logan. Or so we hope.

Q: What have readers' reactions been to Logan and his wife, Julie? Have people tended to sympathize with one more than the other?

A: Reactions have been all over the map. That’s a really fun part of having written a novel—hearing how people respond to people you made up.

Generally I’d say Julie takes the most heat. People seem to have very little sympathy for her—interestingly, women in particular. At the same time, though, I’ve had lots of women tell me they fear they are exactly like her. She’s a controversial figure I guess; at one book club I visited, I actually thought it might come to blows.

I’ve heard mixed reactions to Logan, too: everything from, “I couldn’t believe what a terrible father he is,” to “I kept thinking, I am him.” After first reading the manuscript, my agent wrote, “I'd want to pummel Logan and then I'd want to offer him a consoling hug.” I think that about sums it up.

A: Another novel, populated with characters likely to be just as polarizing, and maybe even more so.

A: I’m drawn to grey areas—the more complicated aspects of family, of relationships, of work. I suspect that that’s why my characters frustrate some readers—because they’re deeply flawed.

These are not model parents or children or husbands or wives or friends; despite good intentions, they’re limited—by their biases, by their insecurities, by their desires, by their own upbringings—as we all are, I believe. So they make poor decisions, and sometimes they behave abominably. These are my people, both in the flesh and on the page.