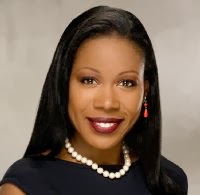 Isabel Wilkerson is the author of The Warmth of Other Suns: The Epic Story of America's Great Migration, winner of the National Book Critics Circle Award for Nonfiction in 2011. She won the Pulitzer Prize as Chicago bureau chief for The New York Times.

Q: Why did you decide to write about the Great Migration, and how did you pick the three people on whom you focused?

A: I knew that the Great Migration was huge -- one of the biggest stories of the 20th Century, but it was relegated to a paragraph in most history books.

The Great Migration lasted from World War I to the 1970s. It involved six million people who had been captives in a rigid caste system and who fled the South for places far away, much like immigrants, but within the borders of their own country. The Migration changed the North and the South and American culture as we know it.

And even though the majority of African-Americans born and raised in the North and West, including myself, are products of the Great Migration, people didn’t talk about it or think of themselves as part of a historical movement.

I wanted to bring it to life through the voices of ordinary people who had made these life and death decisions, to set the reader so deeply into that world that she would ask herself, “What would I have done?”

It was a race against the clock to find the three protagonists and hear as many stories as I could before it was too late. I spoke to more than 1,200 people in a kind of casting call for the role of protagonist in the book.

Structurally, I chose Ida Mae Gladney, George Starling and Robert Foster because they each represent the three major streams of the Great Migration (Midwest, East Coast and West Coast); they left different states, during different decades, for different reasons and faced different outcomes. Together, they give us a picture of how the migration unfolded. 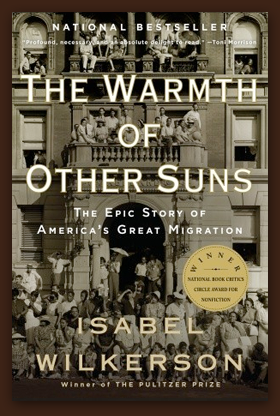 But what drew me to them personally was that they were beautifully imperfect, were willing to explore their triumphs and their frailties and were so different from one another that, reading it, you know when you’re in the Buick with Robert or in the orange groves with George or in the cotton fields with Ida Mae.

There was a chemistry between the three of them and me that helped them open up to me in ways they might not have otherwise. And I believed that if I could convey my deep connection with them, readers would feel it, too.

Q: You spent many years conducting research for The Warmth of Other Suns. What surprised you the most in the course of your research, and what misperceptions about the Great Migration did you discover?

A: I was stunned at the level of repression, violence and specificity in the caste system in the South, the fact that it was in effect into the 1970s, within the lifespan of millions of Americans alive today.

We always hear about the segregated restrooms and water fountains, but those were just the beginning. This caste system extended to every aspect of one’s waking life. Telephone booths, ambulances, elevators, parking spaces -- anything that could be imagined was segregated, and any breach, or appearance of a breach, could mean one’s life.

These codes and the assumptions that sustained them and the damage done to generations of Americans are the basis of divisions that persist to this day.

As for the misperceptions about the migration itself, there were many, but among the most ironic were the assumptions that the migrants did not work.

These were people who had known nothing but work in the places they had come from. Many had worked from sun-up to sun-down for little or no pay as sharecroppers. They crossed mountains and rivers to make a better life for themselves.

Census data show that, contrary to the assumptions about them, those who migrated were more likely to be working than even the African-Americans in the cities they arrived in, that they actually had higher incomes than those who were already there, not because they were making more per hour but because they were working longer hours and often multiple jobs.

Also, contrary to assumptions, the migrators were more likely to be married and raising their children in two-parent households than the African-Americans already there.

Q: The title of your book comes from a Richard Wright quotation. What do you think the phrase signified for those who moved from the South?

A: Most of them would not have been aware of the phrase; it was inserted at the last minute in the early editions of Richard Wright’s 1945 autobiography, Black Boy, and is only in the footnotes of the current version.

But the phrase captures the dreams of those who uprooted themselves, their longing for sustenance and protection that they couldn’t find in the land of their birth. Wright was a part of the Great Migration and was describing his own hopes in making the journey from Mississippi to Chicago.

But if you think about the words literally, they’re a reminder of the courage it takes to pull away from the gravity of one’s own “solar system" and to venture into a universe of the unknown.

Q: You write, "A central argument of this book has been that the Great Migration was an unrecognized immigration within this country." What do you see as the similarities, and differences, between the migrants you write about and those who immigrated to the United States from other countries?

A: The participants of the Great Migration were the only people in our country’s history who were forced or felt they had no other option but to act like immigrants just to be recognized as citizens in their own country, to be able to do such basic things as to vote or to ride where they chose on a streetcar. Many of them traveled farther than immigrants of today who have come from Mexico or Central America to the United States.

Like most immigrants throughout our country’s history, they came from villages and the countryside to big urban centers that were alien to them. Like immigrants, they followed predictable streams to build their new lives – people from Mississippi went to Chicago, people from Texas went to Los Angeles and so on.

But unlike immigrants, particularly those from Europe, they were not able to blend in as easily and met with tremendous obstacles and hostility.

Many were not permitted into unions that allowed European immigrants, and thus the migrators were forced into lower-paying and more dangerous work than people newly arrived from other countries.

Restrictive covenants kept them from being able to live where they chose and forced the lowest paid people to pay the highest rents for the most dilapidated housing.

The resistance they faced in the North and West led to what is called hypersegregation in both housing and in schools, a legacy that we as a country are living with to this day.

A: The book has so taken over my life that it has kept me on the road for the last three years, from the time the book was published. I’ve been from Alaska to Amsterdam with this book.
I'm still stunned by the reaction and have not fully recovered from it. I'm at work on another book, but the first one has not yet let me go.

A: I enjoy interacting with readers on Facebook when I can and have also gotten into Twitter, where I am @isabelwilkerson.