Rachel Cantor is the author of the new novel A Highly Unlikely Scenario. Her work has appeared in a variety of publications, including the Paris Review and the Kenyon Review, and she lives in New York City.

Q: How did you come up with the idea for A Highly Unlikely Scenario?

A: I was at a meditation retreat maybe 10 or 15 years ago. My rabbi-teachers happened to mention the great flowering of mystical practice around the world in the thirteenth century. They speculated about how this might be given that these mystics couldn't communicate with each other--or could they?

From this came the germ of an idea about a person who might serve as a conduit for such communication. The idea evolved quite a bit once I started writing, of course, but that's where it began.

Q: Food clearly plays a big role in the novel. Why did you decide on that as one of your focal points?

A: I met a person at an artists' colony back in 2001 who'd been a complaints person at a pizza company (we must have been comparing bad or weird jobs we'd had). For some reason this tickled me and the idea stuck. I needed my "conduit" to have the kind of job where he might be, well, by a phone!

Once there was a Pythagorean pizza chain, of course there had to also be a Dada Dinner Diner, and so on. 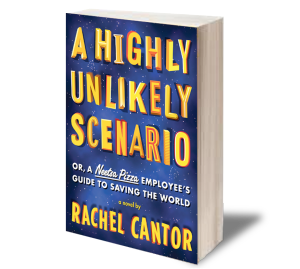 Q: The book includes fascinating information on Jewish mysticism, medieval philosophy, and other related topics. What kind of research did you do in the course of writing the book?

A: I knew almost nothing about any of the "real" people and objects in the book, so yes, I did a lot of research. I read books and articles about Marco Polo, mysticism, the Voynich manuscript, Roger Bacon, and so on, and studied old maps and engravings of ancient and medieval Rome in order to recreate the city convincingly in the final section.

It was tremendous fun, though I did a lot more research than I could ever use!

Q: Do you have any role models when it comes to writing?

A: Both my parents have been role models for me. My mother is an artist--a musician and now also a painter. She taught me how to live a life devoted to creative work.

And my father has written or co-written five books--two children's books and three ground-breaking books about law. He taught me that it's possible to see your ideas in print. Both are also avid readers!

A: I just this week got edits back for the novel that will appear next year, also from Melville House. Tentatively titled Door Number Two, it's about an underachieving translator who gets a call out of the blue from a Nobel Prize-winning poet who says he wants her to translate his latest work.

A bit surprised, she nonetheless agrees but soon comes to realize that the poet has another agenda, one that involves her personally.