Beverly Gologorsky is the author of the new novel Stop Here. She also wrote the novel The Things We Do To Make It Home. She was the editor of Viet-Report and Leviathan, and her work has appeared in publications including Newsweek and The Nation. She is based in the New York City area.

Q: War and its aftermath have played a big role in both of your novels. Why have you chosen this theme?

A: I don’t even know it as something I would focus on. I grew up in the South Bronx, where everyone was a soldier. To me, these are the people I knew. Growing up in a society where war is present—it’s always there….

[It’s more a question of] why isn’t war the background [in more books]. My characters breathe the air; I can’t ignore it.

I never go to a foreign land in my books.

Q: It’s more the impact of the war at home. 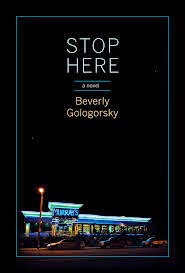 Q: Should more novels include war, or are you just surprised that more don’t?

A: I guess I’m surprised. You look at Nadine Gordimer’s books, you know that apartheid is there, but she just locates you in a place. You’d never say to her, why are you writing about apartheid; it’s just a background to her wonderful characters.

Q: Why did you decide to tell the story in Stop Here from the perspective of a variety of characters?

A: I have a problem with having a lot of voices in my head! There’s so much I feel I have to say, and want to say, and I can’t narrow it as much as other writers can. Because of how and where I grew up, I want to give voice to many women with whom I grew up.

Q: Are there any writers who have been role models or inspirations?

A: I’m a voracious reader; I read fiction from all over the world. Nadine Gordimer, Russell Banks. There are so many writers from whom I have learned so much—the classics, the Russian writers—that could be where I get so many characters!

Q: Did you feel especially sympathetic toward any of your characters, and were there any that you particularly disliked?

A: I’m very sympathetic to Rosalyn. She represents so many women in our society who struggle to do and be something, and then get struck down that way. Her personality and outlook are one to be emulated. She’s a very strong woman.

Murray, to me, is the antithesis. He’s sluggish. But he interested me—he exists for me in people I know.

Q: Did you intend to write from both male and female perspectives?

A: I didn’t plan it, but once a character was alive in me, I began to write it. Nick was alive in me, and I found it really easy to be him. It’s like when Flaubert was asked about Madame Bovary, he said, “C’est moi.”

Q: When you started Stop Here, did you know how it would end?

A: It evolved. I never know how it’s going to end. I think I’d lose interest if I knew. For me, the process of writing is one of depth and discovery.

Q: Did the characters surprise you as you went along?

A: Yes. Not so much in Stop Here, but in The Things We Do To Make It Home. The characters would elude me. I’d stop and go to another document, and write another biography of the character that never appears in the book [to move ahead]. 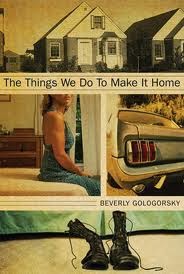 Q: The Things We Do To Make It Home focused on the impact of the Vietnam War on a group of veterans and their families. What do you see as the continuing effect of that war on this country?

A: The Vietnam War alerted the country and the world to another kind of fighting altogether: liberation struggle. The idea of going into Vietnam—there was a lack of understanding [in that situation] as well as in Iraq. In Vietnam, the veterans when they came back—the soldiers were taught to kill, to hate the enemy, and that’s the only way human beings can kill. These kids believed they would meet up with monsters. They lost their belief system, and when they came back, they felt like murderers.

A: The title is "Every Body Has a Story." That is sort of where it’s going—it changes as I work on it.

A: I have an essay in The Huffington Post, “In the Shadow of War,” that links to a review of the book.

--Interview with Deborah Kalb. This Q&A also appears on www.hauntinglegacy.com.
Posted by Deborah Kalb at 7:25 AM