Polly Crosby is the author of the new novel The Women of Pearl Island. She also has written the novel The Book of Hidden Wonders. She lives in Norfolk, UK.

Q: What inspired you to write The Women of Pearl Island, and how did you create your characters Tartelin and Marianne?

A: I think the idea for the island came about when I visited a spit of land in Suffolk called Orford Ness. It’s a strange flat land, almost completely surrounded by sea, and it has a fascinating military history. In the last few decades it’s been left to re-wild, and I love the idea of all the secrets buried deep beneath the nettles and brambles.

With my characters, Marianne and Tartelin, we meet Marianne both as a girl of 15 and as a very old woman. She came to me pretty much fully-formed. She’s quite a crochety, spoilt old lady, with lots of secrets buried deep inside – just like the island that she lives on!

In contrast, Tartelin - who goes to work as a PA for Marianne – felt more delicate, like the butterflies that she’s tasked to catch for her employer. When she arrives on the island, she’s grieving, and it took me a while to get to the bottom of her character. 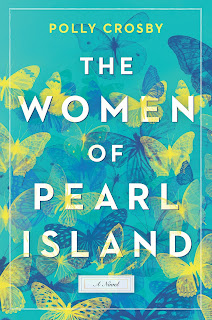 Q: As you mentioned, the novel takes place on a remote island. How important is setting to you in your writing?

A: Oh, massively. For me, setting is definitely a character in itself. I love how a place can also mirror a person’s thoughts and feelings, and an island is great for doing this, with all the forceful weather and crashing tides.

Q: The book involves two timelines, one in the present day and one that mostly takes place in the 1920s. Did you work on one first before turning to the other, or did you write the novel in the order in which it appears?

A: Initially, I wrote the book almost solely set in the present day, with a tiny bit of backstory from the 1950s, and then one day I wrote a short scene about Marianne Stourbridge as a girl in 1927, and I knew I had to explore it more, so that I could understand why she became such a reclusive old woman.

I’m so glad I did! I love the way the different timelines help us see how much the island has changed in the intervening years. By the time Tartelin arrives in the present day, everything we see in 1927 has disappeared beneath layers of history, and it’s Tartelin’s job to try and peel them back to uncover the island’s mysteries.

A: Above all, I think The Women of Pearl Island holds a message of friendship and hope. I don’t shy away from difficult subjects, but I think it’s important that even dark themes have glimpses of light.

Both Marianne and Tartelin are complex characters, and it takes the island to push them together to create a rather unusual, rather wonderful friendship.

A: I’ve just finished my third novel, which is a 1930s historical story set in a derelict mansion made of glass. I’m tentatively thinking about an idea for a fourth novel, and I’m halfway through writing my first children’s book!

I love writing so much, but I do find it exhausting. I’ve recently started making hand-painted silver jewellery, so when my brain needs a break from the writing, I get stuck into that!