Lee Bacon is the author of Imaginary, a new middle grade novel for kids. His other books include The Last Human. He lives in New Jersey.

Q: In your Author's Note, you state that you wrote Imaginary three times. How did it change over the years?

A: Yeah, it wasn’t exactly the most efficient way to write a book!

When I finished the first draft, I felt the spark of something really compelling. But I could also tell—certain aspects just weren’t working. I put it aside for like a year or two, then went back and tried again, incorporating elements from the original and reworking other bits.

But when I finished, I still wasn’t happy. So I set the manuscript aside to work on other things. But no matter how many times I abandoned the project, there was just something about this story—and these characters—that kept pulling me back.

At some point, I returned to Imaginary. And this time, when it was done, I knew… I’d gotten it right. Finally!

What changed from version to version? Well, in the first draft, there was this entire other plotline that took place in another world—a place called Imaginhattan—where all imaginary friends live when they’re not in our world. It was a lot of fun. Whimsical and silly.

But it also made the plot feel scattered, almost like the Imaginhattan stuff deserved a book of its own. I felt that it was pulling us away from the heart of the story I wanted to tell: a story about a boy and his imaginary friend.

So, really, each subsequent draft was about narrowing the focus. Of course, there had to be other parts to the story, other characters. But if any element pulled the spotlight too far away from that key relationship between the boy and his imaginary friend, it landed on the cutting room floor. 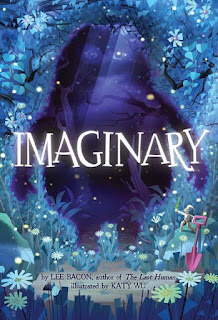 Q: The Kirkus Review of the book says, in part, "With Shovel as a narrator—hilarious, despite the seriousness of the subject matter—readers experience Zach’s loneliness up close." What did you see as the right balance between seriousness and humor as you worked on the book?

A: I just had to trust my gut. Ultimately, it’s about finding the balance that works best for the story you’re trying to tell. If things were getting a bit too dark, I’d try to lighten it up with something silly.

On the other hand, this is a story that deals with real grief and loss. We don’t want to get so caught up in the goofiness that we forget what Zach is going through.

Ideally, the light and the dark should pair well together. One makes the other more effective. We laugh harder because the goofiness follows something sad. It’s a kind of relief, a release.

Going the other way, we feel that stab of sorrow more deeply because a few pages earlier, we were chuckling about something ridiculous that Shovel was doing.

A: No! This book has a twist ending. So much of a twist, in fact, that I surprised myself while writing.

A: Mostly, I hope kids enjoy it. That they smile and connect with the characters and want to keep turning the pages. That it transports them, the way only a good book can. This is always my top priority.

But beyond that, I also hope this book might offer something deeper for certain readers, something that kids might be able to connect with in their own lives. Like, for those who are dealing with loss, or who have a tendency to escape into their imagination the way Zach does.

For these readers, I hope Imaginary lets them know that—whatever they’re going through—they’re not alone.

A: My wife and I just had a baby. Our second! So these days, a lot of my time is filled with diaper changes, meal prep, toddler chasing, and all sorts of mayhem. It’s fun, even if we’re not quite getting as much sleep as we’d like.

But I do still manage to squeeze in the occasional time to write. My next project is scheduled to come out in February 2022. This one’s YA. The title is Replaced, and it’ll be available exclusively on Audible. It’s a fun, twisty techno-thriller.

If I had to boil the plot down to a single sentence, it would be: What would you do if you realized you’d been replaced by a version of you that was better in every way?

Replaced is coming out in a few months. I still haven’t listened to it, so I look forward to experiencing it along with everyone else!