Andrea Wang is the author of the new middle grade novel The Many Meanings of Meilan. Her other books include the new picture book Watercress. She lives in the Denver area.

Q: What inspired you to write The Many Meanings of Meilan, and how did you create your character Meilan?

A: I’ve been intrigued by the number of homophones in Mandarin for a long time, mostly because my own grasp of the language is minimal and, for a long time, I misunderstood the actual meaning of my grandfather’s nickname for me.

That gave me the idea to write about a Chinese American girl who discovers multiple homophones (and thus, multiple meanings) of her name, which then affects the way she sees herself.

The children of immigrants often feel caught between cultures, and I tried to show how Meilan struggles with fulfilling the traditional expectations of her parents while also trying to find her place in a majority white community.

Using the homophones of her name allowed me to explore code-switching in a different way.

Q: In her New York Times review of the book, the writer Jean Kwok said, “While it tackles issues such as racism, Wang’s novel is about finding common ground.” What do you think of that assessment?

A: I agree wholeheartedly. Meilan comes to realize that she has more in common with many of the people in her life than she ever imagined. For instance, Logan and Liam, the twins who live next door, are each struggling with their own identities as individuals.

She even sees how the principal, who has been her antagonist, carries burdens that influence his behavior, much as the burden of her parents’ expectations has shaped hers.

The book is about both Meilan’s self-acceptance and discovery of our shared humanity. 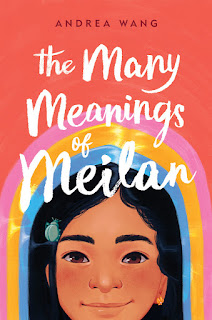 Q: In an interview with School Library Journal, you said, “I think renaming yourself is one of the most empowering things you can do, because you’re essentially saying, ‘This is my true name. This is my true self.’ On the flip side, as I wrote in my essay on Medium, ‘It’s Time to Pronounce Asian Names Correctly,’ I feel that forcibly renaming someone is a form of violence.” Can you say more about that, and about the role names play in the novel?

A: Names play a crucial role in the book, as they do in our lives. Our names give us identity as individuals – I can’t imagine how dehumanizing it would be to not have any name at all.

At birth, other people give us a name, and as we grow, we can choose to keep that name or take another that we feel better reflects our selves. There is so much power in having that choice, in having a name that is an expression of your identity, that when it’s taken away it feels like being stripped of something vital.

In the book, when the principal forcibly renames Meilan, she experiences it as the sound of fabric tearing. It’s the ripping apart of her understanding of who she is.

A: All of the above! I also hope readers see that finding who we are and our place in the world is an ongoing process, and that we should stand up for ourselves when others try to impose their ideas of who we “should” be on us.

A: My next picture book is called Luli and the Language of Tea and will be published by Neal Porter Books/Holiday House in 2022.

It’s about how the words for tea are similar in many languages because they’re derived from the Chinese word, and how that fact brings together a group of immigrant children from many countries.

I’m also currently revising my second standalone middle grade novel, which is also a contemporary coming-of-age story with Chinese American characters. It’s slated to be published in 2023 by Kokila Books. I have a couple of picture book biographies that are in the works, too.

A: My current favorite type of pie is Dutch Apple Pie. (There are a lot of pastries, including pie, mentioned throughout the book because Meilan’s father is a baker.) My good friend Debbi Michiko Florence recommends adding white miso to the apple filling, so I’m excited to try making Dutch Apple Pie with a Japanese twist!

Thanks so much, Deborah, for having me on your blog again!