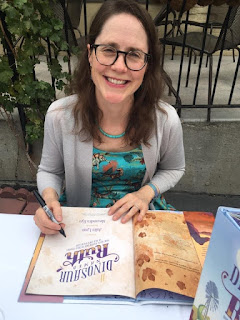 Julia Lyon is the author of the new children's picture book A Dinosaur Named Ruth: How Ruth Mason Discovered Fossils in Her Own Backyard. Also a journalist, she lives in Salt Lake City.

Q: How did you first learn about Ruth Mason, and at what point did you decide to write this book?

A: I stumbled on Ruth Mason's name online after I went searching for names of female paleontologists. Bits (only bits!) of her story were out there, but it was intriguing enough to know that she found fossils as a child.

Once I realized how long she had waited (nearly a lifetime!) to learn the origin of her fossils, I knew her story should be told. I've written thousands of newspaper stories. My gut tells me when a story deserves my attention.

Q: What do you think Alexandra Bye's illustrations add to the book?

A: From the first sketches on, I was thrilled with Alexandra's illustrations. I felt like she brought Ruth alive and gave her so much personality.

And the fact that the dinosaurs are cleverly woven into many of the first illustrations really impressed me as a parent -- I know that's exactly the kind of discovery kids like to make as they're reading.

I was also happily surprised by the color palette. I've noticed some dinosaur books tend to weigh heavily on earth tones. I think Alexandra's choice of bright colors helps draw the reader in. 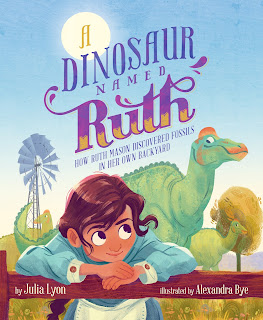 Q: How did you research Ruth Mason's life, and did you learn anything that especially surprised you?

A: Some of what I did was straightforward. I contacted the South Dakota State Archives for census records and information about her childhood. A book about early pioneers was particularly useful.

I did a significant number of interviews -- both by phone and in person -- with people who knew Ruth during the dinosaur discoveries. I even reached out internationally and emailed with paleontologists in Wales who told me about the dinosaur they informally call Ruth and how that dinosaur came to live at their museum.

I think that was one of the aspects of this story that really surprised me -- that something millions of years old, thousands of miles away could find a new home in a new country. All because of Ruth.

Q: The School Library Journal review of the book says, "Students will be able to identify with Mason's curiosity and wonder." What do you hope kids take away from the book?

A: The reviewer from the School Library Journal really seemed to understand the essence of the story. I think kids dream of discovery -- whether that's ancient treasure or dinosaur bones. Don't we all?

So I like to think that the book shows that ordinary people in ordinary places can find extraordinary things. You don't always have to have special tools or special knowledge -- but you do need to have a curious mind.

A: I'm finishing up one nonfiction picture book manuscript and revising another. Both are about kids making a big difference in their communities. I would be thrilled to sell them in 2022. I think they're important stories that kids could relate to right now. And, like with Ruth, I hope kids find the main characters inspiring.

A: Picture books aren't just for kids! As A Dinosaur Named Ruth has spread across the country, I've been surprised to hear how much grownups have enjoyed the book, too. I think Ruth's message is universal: keep asking questions and one day you might get the most amazing answer!