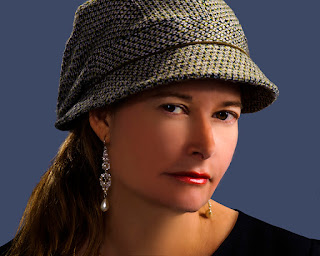 Teresa Dovalpage is the author of the new novel Death under the Perseids, the latest in her Havana Mystery series, which also includes Death Comes in through the Kitchen. Born in Havana, Cuba, she lives in New Mexico.

Q: What inspired you to write Death under the Perseids, and how did you create your character Mercedes?

A: Death under the Perseids was inspired by the meteor shower. I was watching the amazing display of lights one summer night and thought it would be a great background for a mystery plot.

The meteor shower is actually the “ghost of a comet”—we only see it when the Earth encounters the dust particles and debris left behind by the comet Swift-Tuttle. I love metaphors!

Mercedes is based on two friends of mine—I even borrowed their dichos and ways of speaking—and a little bit on myself.

Q: This is the fourth in your Havana Mystery series. Did you know from the start that you'd be writing more than one, and how do the books connect to one another?

A: At first, I didn’t know if I would continue writing mysteries. I wrote Death Comes in through the Kitchen, a culinary mystery, for the fun of it.

Then I realized that two characters—Padrino, the santero detective, and Marlene Martinez, a Cuban lieutenant—could appear in other books. Padrino solves the case in Queen of Bones and Death of a Telenovela Star features Marlene after she settles in Miami and opens a bakery called La Bakería Cubana. 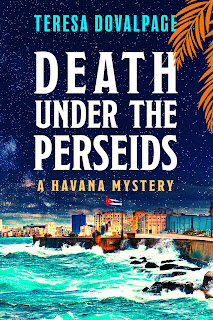 A: Yes, I pretty much know how my mystery novels would end before I start writing. In other kind of books, I don’t always have a very clear idea but with a mystery I’d rather have a well-defined blueprint to avoid loose threads that tend to annoy and disappoint readers. Of course, I also changed and tweaked a few things along the way.

Q: What do you think the books say about Havana and about Cuba more generally?

A: Hopefully, they will give readers a good idea about my country of origin: how people live, the food they eat (I love writing about food!), a strong sense of location…

The stories are set up in Havana, for the most part, because that’s where I grew up and lived for 30 years. In that respect, I am a tour guide, taking readers around the streets and parks I know so well.

Though things have changed since 1996, when I left, I keep current on what goes on there. My 85-year-old mom still lives in Havana and is a great source of juicy chisme, the kind of gossipy stuff that you can’t gleam from Google.

A: The fifth novel in the series—it’s almost ready but I still don’t have a title, ay ay ay! In it, Mercedes returns to Havana in search of her mother, an American known as “Tania Rojas.”

The novel has two narrative threads: Mercedes’ inquiries in 2018, and the letters written by Tania that detail life in Cuba during the ‘80s and the fall of the Berlin Wall as seen from Havana.

A: Besides my job as a Spanish and ESL professor at New Mexico Junior College, I also work with the Taos School District Visiting Artist Program helping kids write and publish bilingual books about their culture and experiences.

It’s a very rewarding task, even if it’s mostly long-distance now. I’m hoping to ignite the creative spark in my students! The best part is giving each of them a book at the end of the project, which makes them published authors!