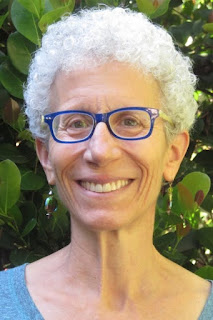 Audrey Ades is the author of the new children's picture book The Rabbi and the Reverend: Joachim Prinz, Martin Luther King Jr., and Their Fight against Silence. Ades's other books include Judah Touro Didn't Want to be Famous. She lives in Florida.

Q: What inspired you to write about Joachim Prinz and Martin Luther King Jr.?

A: I am always on the lookout for topics that have a strong social- values message.

I believe it was in 2017 that I attended the MLK Jr. Day festivities in West Palm Beach, Florida. The opening ceremony included a young poet who had written about a documentary she had seen about the relationship between MLK Jr. and Rabbi Joachim Prinz. I wish I had a copy of her poem, but I have been unable to locate it.

In any case, immediately after the ceremony, I began researching this rabbi. There were many parallels between the life experiences of Dr. King and Rabbi Prinz. I thought that the story of their friendship and collaboration was important to tell.

Q: What do you think Chiara Fedele's illustrations add to the book? 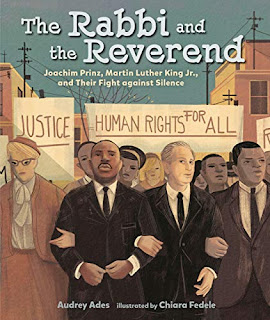 A: Chiara’s illustrations are wonderful! I feel so lucky that Kar Ben chose her as the illustrator for this book. Not only does she depict the decades-old feel of the times when King and Prinz lived, but her illustrations capture the heart and the theme of the story. You can feel the respect and care these two men had for each other through her beautiful drawings.

Q: The Publishers Weekly review of the book calls it a "striking narrative of interfaith, cross-cultural support for equality." What do you think of that description, and how would you describe the dynamic between the two men?

A: I am very grateful to PW for their kind review. Jews and African Americans have a long history of solidarity against racism. Both Prinz and King suffered and witnessed bigotry and inequality.

These two men of faith were also realists. They recognized that unless they took action against racism - and supported others who took action - that nothing would change.

I believe they especially bonded around the idea that “good people” have a critical role in eradicating racism. Unless and until good people break their silence and speak out about the wrongs inflicted upon their brothers, others will continue to exploit their power.

A: I hope this book will introduce children to the injustice and pain that sparked the civil rights movement.

I hope they will be curious about these two brave men and the history of the movement they fought for.

I hope young readers will notice how much their world has changed from the time that Prinz and King lived, and also take note of the things that have not changed.

And I hope this book will plant the seeds that each individual has a role to play in the journey toward social justice.

A: I am working on a middle grade book about the Arab-Israeli conflict and a picture book about a scientist whose early life experience set him on a path to change healthcare delivery around the world.

A: I am thankful to you, Deborah, for your interest in this book and your help spreading the word about the lives and work of these two important historical characters.