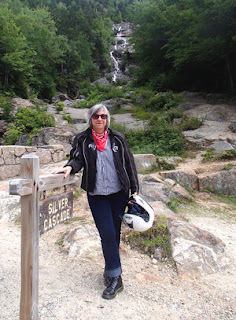 Jamie Hogan is the author and illustrator of the new children's picture book Skywatcher. Her other books include The Seven Days of Daisy. She lives on Peaks Island, Maine.

Q: What inspired you to create Skywatcher?

A: I spotted an article in the local newspaper about three parks in Maine vying for Dark Sky status. I had no idea why that was important and decided to research with a picture book in mind, looking into light pollution and how it affects wildlife and humans.

Q: As you were working on the book, did you focus on the pictures or the text first--or both simultaneously?

A: I'm a visual communicator so I always begin by making a quick storyboard, to see the whole book like a short film on a single page. The words are by no means secondary, but I work first on what I want to tell visually and then the text can be simple because the illustrations convey plenty.

I made 10 dummies for this book before finding a publisher, which meant I kept at it, and responded to input from my critique group, other writers, editors, and my ever-patient family that knew I couldn't let it go. 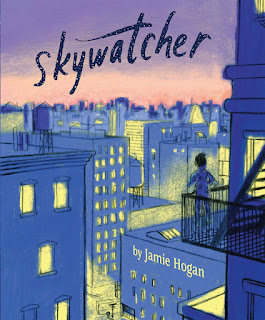 A: In the first scene, they are in separate spaces, before bedtime. In early versions of the book, both Tamen and his mother were on their phones. The story was as much about unplugging as anything else. I witness so many families absorbed in their phones.

But that became less of my point during development. Instead, the trip they take brings them closer together; being out in nature with no distractions, they learn about each other.

A: I want kids to get curious about the dark rather than be afraid of it. Our urban spaces are overlit, which is unnecessary and wastes so many resources. We all need to acknowledge our place in the universe and seeing the night sky is a humbling and essential experience.

A: I'm finishing illustrations for Rae Chalmers’ third book in a middle grade mystery series, the Oxbow Island Gang. This one involves drawing lots of crows! I'm also developing two book ideas of my own and doing book events around Skywatcher.

A: All of the books I've illustrated have a nature theme on some level. Observing and drawing my habitat, beyond the professional demands of my projects, drives my work.

I believe we all benefit from being outside, and are stewards of this planet. Making picture books that create curiosity about the natural world is deeply satisfying.