Paul Halpern is the author of the new book Flashes of Creation: George Gamow, Fred Hoyle, and the Great Big Bang Debate. His many other books include Synchronicity. He is a professor of physics at the University of the Sciences in Philadelphia.

Q: What inspired you to write this dual biography of physicists George Gamow and Fred Hoyle?

A: As a child, I was highly inspired by George Gamow’s book, One, Two, Three, Infinity, a marvel of scientific exposition. It greatly stimulated my interest in physics. I also read The Black Cloud, by Fred Hoyle, and considered him one of the masters of science fiction.

Around the same time, I heard about the Big Bang vs Steady-State debate, which spurred my fascination with cosmology. Knowing that Gamow and Hoyle were two of the principal players involved in that debate made me even more interested in those scientists.

I had considered, as various points, writing biographies of each of those scientists, so when the opportunity arose, I put forth the idea of a dual biography, with the Big Bang as kind of a third character. I think it worked out great, judging by the excellent reviews.

Q: What do you see as some of the most common perceptions and misconceptions about the Big Bang Theory?

A: Many people now associate The Big Bang Theory with the popular television show! But it is a term invented well before then, by Fred Hoyle in 1949. Hoyle coined the term on a BBC radio show as a way of making fun of the theory.

Gamow never liked the term, given that the universe started out small, not big, and there wasn’t an actual explosion. But the term stuck. A contest with more than 13,000 entries of renaming the birth of the universe couldn’t find a better name!

The biggest misconception about the Big Bang is that it was an explosion in space, like a blast of dynamite, rather than the expansion of space itself.

Q: How would you describe the dynamic between the two scientists?

A: They met only rarely in person—most of their debates were in media accounts. 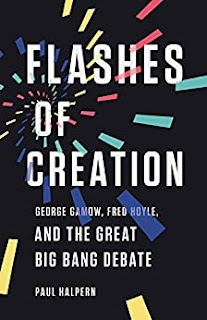 The one documented time they spoke directly about their theories was in the summer of 1956 in La Jolla, California, where Gamow was consulting for an aerospace company, and invited Hoyle to visit. They drove around in Gamow’s white Cadillac and speculated about the temperature of space. Their discussion was very friendly.

Less than a decade later, a discovery by Arno Penzias and Robert Wilson established that temperature as about 3 degrees above absolute zero—confirming the Big Bang theory.

Q: The Kirkus Review of the book says, "While many popular histories of this debate portray Gamow and Hoyle spending their lives debating this question, Halpern’s nuanced biographies give equal space to their other accomplishments, which were not only important, but Nobel-worthy." What is each scientist's legacy today?

A: Gamow developed the mathematical ideas used to determine the energies for particle colliders. He also pioneered science popularization—both in print and on TV.

Hoyle was similarly a great popularizer. He also brilliantly came up with the mechanism by which the carbon and other higher elements in the universe are produced—in the highly-compact, fiery cores of dying stars and released in supernova explosions. Thus he explained the chemical basis of how life—and human beings—exist in the universe.

In short, aside from the Big Bang and Steady-State dispute, their legacies are long-lasting and magnificent—in science as well as science popularization.

A: I am working on an article for an Italian journal about a suggestion by the Austrian thinker Ernst Mach, called Mach’s Principle, that the distant celestial bodies have a direct influence on bodies on Earth, by causing them to move in straight lines at constant speeds (or remain at rest, if they are already still) unless acted on by an external force—namely, the state of inertia.

Over the decades since he proposed that idea, there have been many schemes by Einstein, Dirac, Hoyle and others to try to get that idea to work. I’ll discuss what makes that notion so compelling.

A: It was delightful, during the writing of the book, to get to know the family members and colleagues of those I wrote about.

One of the scientists that I interviewed, James Peebles, found out only a few weeks after I called him that he won the Nobel Prize. I was so pleased, and also happy that I had the chance to interview him before he was inundated with requests.

--Interview with Deborah Kalb. Here's a previous Q&A with Paul Halpern.
Posted by Deborah Kalb at 8:38 AM