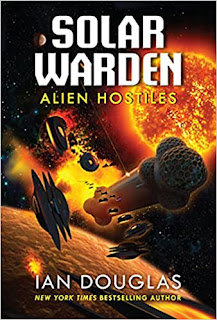 Ian Douglas, a pseudonym for writer William H. Keith, is the author of the new novel Alien Hostiles, the second in his Solar Warden series, which began with Alien Secrets. He lives in Pennsylvania.

Q: This is the second in your Solar Warden series--did you know when you were working on the first one that there would be a sequel?

A: Oh, yes. The project was sold as a trilogy so I knew all along there would be an ongoing story arc.

Q: Do you think your character Mark Hunter has changed from one book to the next?

A: I certainly hope so, since character change and development are vital to any character-driven plot. Through the course of the series he learns key lessons about trust, about how loyalty and responsibility extend both up and down within a chain of command, and about how things are not always what they seem.

Q: What inspired you to create this series, and how did you come up with the plot for this second book?

A: The idea for the entire series was inspired by the purportedly true case of a hacker in the UK named Gary McKinnon who by his own account broke into NASA and U.S. Defense Department computer networks in 2000 and uncovered information about a top-secret space program called “Solar Warden.”

According to this premise, we now have an operational space fleet created with alien-derived technologies and assistance better than anything in Star Trek.

I used this concept as a springboard to an investigation of the modern UFO phenomenon, attempting to tie together wildly disparate stories and accounts into a somewhat coherent whole.

If even a fraction of these case histories are true, what do they tell us about ourselves and our place within a vast and populated cosmos, one spanning time as well as space?

The plot for the second book, specifically, is a bridge between the introductions of the first book and the revelations of the third. It largely centers on stories that the Nazis had substantial help from extraterrestrials in the development of their wunderwaffe. Who was helping them? More importantly.... why?

A: That many stories about UFOs and alien conspiracies are pure nonsense, but that there are far too many reliable accounts by reliable witnesses to allow us to discount the basic premise. The evidence seems to suggest that there are aliens, they are here, and they are watching us for purposes of their own.

The Solar Warden trilogy suggests several alternatives to the traditional “little gray men from space” stories that explain some of the inconsistencies and improbabilities that have bedeviled the topic from the beginning.

I hope interested readers can take a fresh look at the subject and free themselves from the hoaxes, crap, and misinformation, allowing themselves to ask... what if the basic premise is true?

A: I've recently completed Book 3 in the Solar Warden series, Alien Agendas. I have now begun my next military-SF series, which pits a female Alexander the Great--Alexandra the Greater?--of the future against a billion-year-old Galaxy-spanning empire. The series has the working title of Galaxy Raiders.

A: Some True Believers among UFO conspiracy-oriented readers may be put off by my take on some long-treasured tropes within the field.

In the course of the Solar Warden series I dissect a number of case histories, and find alternative explanations for some beloved myths, while accepting and confirming others. The alien Grays are far too human to be truly alien, for instance, and they're not from Zeta Reticuli. What else might they be?

I ask only that my readers suspend their disbelief long enough to enjoy the ride... and to realize that the Galaxy is much larger and much stranger than we can ever possibly imagine.