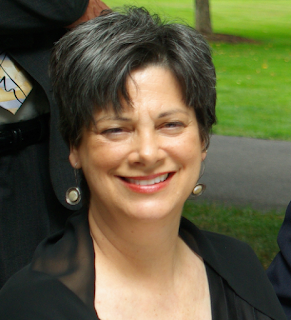 Suzanne Hinman is the author of the new book The Grandest Madison Square Garden: Art, Scandal, & Architecture in Gilded Age New York. It focuses on the second Madison Square Garden, built in the late 19th century. Hinman has worked as a curator, gallerist, professor, art model, and museum director. She lives near Cornish, New Hampshire.

Q: Why did you decide to write this book about the second Madison Square Garden, and why do you see it as "the grandest"?

A: It is so difficult to answer this question because it was so long ago that I was both captivated and captured by the subject matter—I truly can barely remember a time when I wasn’t obsessed by this Madison Square Garden and its creators.

Likely it began when I first came to Dartmouth College in New Hampshire’s Upper Valley as associate director of the Hood Museum of Art and learned about the nearby home and studio of one of America’s finest sculptors, the Augustus Saint-Gaudens National Historical Park.

I fell in love with his beautiful 1893 goddess Diana, a half-sized version installed at the park. And when I learned its home had originally been the Garden designed by Stanford White, one of my favorite architects with a fascinating if troubled private life as well, I had to make the leap.

There is no question that this 1890-91 Garden was the “grandest.” At 93,000 square feet, it was the largest space in the world dedicated solely to pleasure, and architecturally it was quite beautiful, borrowing liberally from Italian renaissance models—one of my passions—while boasting America’s tallest tower!

The first version of the Garden had been a much smaller, rather shabby remodeled train station, and the two versions of the Garden that would follow were quite architecturally and aesthetically undistinguished. 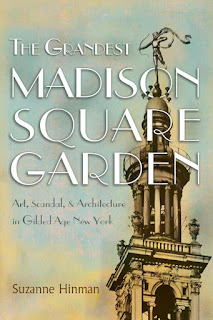 Q: You note that you spent 12 years researching and writing the book. How did you conduct your research, and what did you learn that especially surprised you?

A: The foundation of my research was based on a wonderful resource available at the Dartmouth College Library, the Augustus Saint-Gaudens Papers. I was also able to research the materials at the Saint-Gaudens National Historical Park.

In addition, I spent several weeks living in a dorm at Columbia University while I went through the Stanford White Papers and the papers of his firm of McKim, Mead & White at their Avery Architectural and Fine Arts Library, I also scoured  the files at the Metropolitan Museum of Art, the New-York Historical Society, and the New York Public Library.

Additional trips were made to Washington, D.C. for the Archives of American Art and the Library of Congress; to Philadelphia and the Philadelphia Museum of Art, where the second version of Diana still resides, as well as to other institutions around the country.

And another, absolutely crucial resource was the digitization of countless newspapers of the period, from New York as well as across the country, that provided me with an endless bounty of first-hand data, observations, and some surprises as the story of Madison Square Garden, the Diana, and its cast of characters unfolded in near real-time.

Q: One of the figures who plays a large role in the story is architect Stanford White. How would you describe his life and death as it relates to the building?

A: The grandest Madison Square Garden was the perfect stage for Stanford White and his exuberant artistic imagination, energy, and passion for the beautiful.

Not only did he design the building but with the Garden serving as backdrop, he became a theatrical impresario, producing a number of events there, including the lavish opening ceremonies for the arena and, for example, the 1892 Actors Fund Fair where he created an entire fantasy world with reconstructions of Shakespeare’s home and Globe theatre, a Japanese tea garden, and a Moorish mosque set among fountain-studded gardens.

It was the huge Garden commission that made White’s name, and as a New Yorker, it also played a great role in his own personal life. On the negative side, there were things that occurred in his apartment in the Garden’s tower that today we find quite distressing, but again that was a part of his life. For these reasons, it seems particularly fitting that the Garden would also be the place where his life ended, the result—one way or another—of his passionate nature.

Q: Although the building is gone, what do you see as its legacy today?

A: Unfortunately, because it was razed in 1925, most Americans are unaware of the  this second Madison Square Garden and are quite surprised to learn of its grandeur.

As for the legacy of the Garden, its memory and the source of inspiration for its great tower, the Giralda in Seville, Spain, is preserved in a number of versions scattered around the country, beginning with the 1892 Ferry Building in San Francisco and including  towers in Minneapolis, Buffalo, Chicago, Miami, Cleveland, and Kansas City.

The second version of the beautiful Diana by Augustus Saint-Gaudens that topped the Garden’s tower continues to reign from the Great Stair Balcony at the Philadelphia Museum of Art, and well-loved half-sized versions are to be found at the Saint-Gaudens National Historical Park, the Metropolitan Museum of Art,  the Amon Carter Museum of American Art, the Princeton University Art Museum, and Brookgreen Gardens, along with private collections. Smaller versions of the figure were widely sold at Tiffany’s and elsewhere and now remain in a multitude of museum and private collections.

A: For the rest of this year, I will be traveling around the eastern half of the country, to New York, Philadelphia, Chicago, Boston, etc., offering talks and readings on aspects of the Garden and the Diana. A full listing of these events can be found at my website. As for my next book, I am undecided between continuing an examination of Gilded Age art and life, or perhaps a novel on the New Hampshire Shakers, a particular interest as my husband and I live on what was once Shaker land.

A: Perhaps one of the most surprising features of the book is in the epilogue when I examined Stanford White's murder on the roof of the Madison Square Garden in 1906. Termed "the crime of the century," countless books, films, and even a Broadway musical have recounted the story of the beautiful young model ravished by Stanford White and then shot before stunned spectators by her jealous, millionaire husband. The book takes another look at the story and presents a quite different and rather surprising motive for the crime.

The lives and work of Stanford White and Augustus Saint-Gaudens present us with another question for consideration--the relationship of the artist and their life with the artist’s work. Can or should these be viewed separately? Can we be troubled by aspects of an artist’s life—morally, ethically, or legally—and still find value and beauty in their work?