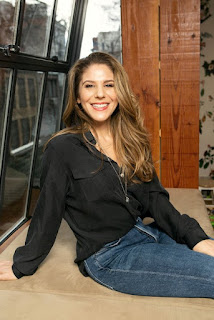 Julie Satow is the author of the new book The Plaza: The Secret Life of America's Most Famous Hotel. She is a regular contributor to The New York Times, and she lives in New York City.

Q: Why did you decide to write about the history of the Plaza hotel?

A: I cover real estate, mostly for The New York Times, and had been writing about the building over the years. I also grew up in New York City, and was married at the hotel. It’s such an iconic building; it’s dominant on the skyline. The building always intrigued me. When I started to research it, I found no one had written a real history of the hotel since the 1960s. It was ripe for a book project.

A: The research was one of the most exciting parts. I’m a journalist, but I couldn’t interview people for the historical part. There are so many newspaper articles that are digitized now, so you can put in key words and amazing articles would come up. I uncovered all these stories—I read through tens of thousands of articles. One of the first things I found was a murder when they constructed the hotel. And for the more recent times, I did the classic journalist thing, and interviewed people. Q: What impact did Donald Trump’s ownership have on the hotel?

A: It was a pretty critical moment. He bought the hotel at the height of the ‘80s. He was a real estate golden boy at the time. He paid a historic sum—half a million dollars per hotel room. He borrowed it from a consortium of banks—it was a quintessential Trump deal. He acknowledged that it made no financial sense.

He put Ivana in charge—she did an excellent job. She made a success of the hotel. But he made such a bad business deal—the hotel made money, but he couldn’t cover the debt on the hotel. He was the only person to bankrupt the Plaza.

Also as a result of his ownership, creditors took over the hotel, and there was the beginning of foreign ownership of the Plaza. Now the Qatari government owns the hotel. His ownership has affected the way the Plaza is—it was a turning point.

Q: What would you say are some of the most common perceptions and misperceptions about the Plaza?

A: When most people see it, they think of Eloise, or the Beatles staying there, or Truman Capote’s black and white ball. That’s true—it’s been filled with celebrities.

But there’s so much more—it’s a lens to tell a social history of New York. It’s the story of New York—a window to see what happened in New York through the past decades to today.

Q: What do you see looking ahead for the hotel?

A: Now, it’s largely condominiums owned by very wealthy people. Most of them don’t live there full-time. There is still a boutique hotel. That will not change going forward. It’s a landmark so they can’t change the façade. It’s been through a rough patch in recent years. I went to India to visit the [then-] owner—the government wants him to pay billions for a bond scheme. He had financial and legal issues. A year ago it was sold to the Qatari government…their partners may include a Saudi prince and other partners.

My hope is that they’ll spend some money on the hotel. The rooms like the Oak Room and the Edwardian Room are closed. I hope they’ll make a deal with the unions and reopen them, and splurge on the hotel. It won’t be a huge moneymaker, but it’s a symbol of New York.

A: I’m working on some articles, and researching a new book proposal. I’m traveling and doing interviews for the book. It’s a lot. I’m excited!

A: The book can appeal to a wide range of readers—people who are interested in history, in investigative reportage. There’s a lot of celebrity stuff in there, but also historical research. I hope people read it!