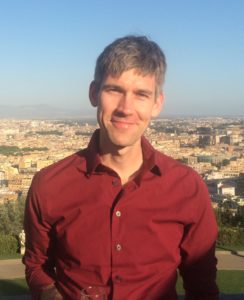 Sam Kean is the author of the new book The Bastard Brigade. His other books include Caesar's Last Breath and The Tale of the Dueling Neurosurgeons, and his work has appeared in a variety of publications, including The New Yorker and The Atlantic. He lives in Washington, D.C.

Q: You write, "The Bastard Brigade is just the sort of physics-adventure tale I always wanted to tell..." How did you decide on this topic? 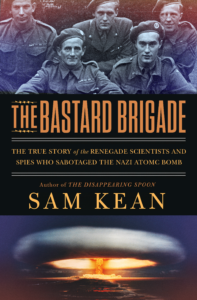 A: Yeah, as I wrote, I wanted to find a physics story that I found compelling enough, and stopping a Nazi atomic bomb was definitely that! I also got drawn in through the amazing characters like Moe Berg and Joseph Kennedy and Boris Pash and Irene Joliot-Curie. They were too compelling not to write about.

A: Most of the research was in archives - in New York, D.C., Palo Alto, Boston, and so on. What really fascinated me was how obsessed the Americans were with the prospect of Hitler getting the bomb, and how much that drove them - both in working harder to build the bomb, and also to undertake some crazy missions.

Q: The book includes an intriguing cast of characters, as you’ve noted. Did you know from the beginning who you'd include, or did you add people as you went along?

A: I mostly knew the from the beginning. What I didn't expect was that some of them would have such fascinating early lives, in addition to the mission they did during the war.

A: I hope they just jump in and enjoy the story. That's what it's all about.

A: Taking a bit of a break right now, but I should be starting another book soon!

A: That it's a really wild story. All my previous books were like a collection of interconnected short stories, with each chapter standing more or less alone. This book was more like a nonfiction novel - one overarching story And it was a blast to write.

--Interview with Deborah Kalb. Here's a previous Q&A with Sam Kean.
Posted by Deborah Kalb at 7:17 AM