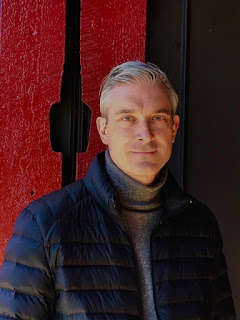 Bob Batchelor is the author of the new book The Bourbon King: The Life and Crimes of George Remus, Prohibition's Evil Genius. His other books include Stan Lee: The Man Behind Marvel and Mad Men: A Cultural History. He teaches at Miami University, and he lives in Cincinnati.

Q: You note that you first learned about George Remus 15 years ago when writing about bootlegging for the Dictionary of American History. At what point did you decide to write a book about him?

A: The more I thought about Remus, the more it seemed that no one had really fully captured the bourbon king (He had also popped up in Ken Burns’ Prohibition documentary and as a character on HBO’s Boardwalk Empire.) My goal was to place his story within the larger context of American history.

After my last book, a biography of Marvel icon Stan Lee, I wanted to get back to my interests in early 20th century history and biography. George Remus fit neatly into my cultural historian wheelhouse: a weighty topic that is historically significant and reveals interesting links from an earlier era to what we are experiencing now. I knew a full-scale cultural biography of Remus would illuminate the 1920s at a time when people are gearing up for the 2020s.

A: All my books are based on multi-archival research, which creates the foundation of the narrative. There is so much more available now because of digitization efforts, so there were tens of thousands of documents, newspaper articles, and government reports that I read for background, details, and context.

Also, Charlie Taft donated his original transcripts to the Yale Law Library. Working with Miami University’s Special Collections staff, we were able to get Yale to lend those papers, a massive eight-volume hardbound collection that totaled something like 7,000 pages. 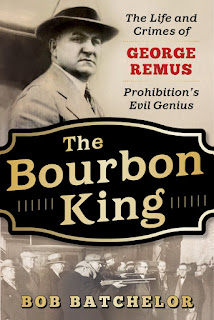 With The Bourbon King, though, I felt that it was critical to walk in the footsteps of the characters, especially since I live in Cincinnati. I get my haircut about 500 yards from the hotel where Imogene stayed and retraced the path leading up to her murder countless times, as well as visiting dozens of areas that were part of Remus’s empire.

Taken as a whole, these investigations fanned out and led to uncovering additional pieces of the puzzle. For example, I consulted with Bo and Peter Pogue of the Old Pogue Distillery in Maysville, Kentucky, where their grandfather worked directly with Remus, and discovered new information at a local historical societies. The on-the-ground work research also included trips to Franklin Dodge’s hometown in Lansing, Michigan, and visiting his boyhood home.

As a result, I’ve touched artifacts that the characters touched and walked where they walked, adding an important dimension to the traditional archival research.

Q: How well known was Remus during his lifetime?

A: George Remus was locally famous as a pharmacist in Chicago—his first career—because pharmacists then operated more like small-town doctors. His fame skyrocketed when he became an attorney. Reporters knew they could get a great sound bite from him, so he started getting into the newspapers.

Then, he launched a criminal defense practice that led to many high-profile cases that landed him on the front page of papers nationally. (I like to joke that he was kind of the Johnnie Cochran of early 20th century Chicago.)

The taste of fame and money were not enough to satisfy Remus’s desires—he expected to become a larger-than-life figure. He thought of himself in almost presidential terms, as if he were anointed to greatness. With bootlegging, he would achieve international fame (or perhaps “infamy” is a better term).

Remus’s adventures as a bootlegger were covered by papers across the nation, particularly after he was caught. Readers couldn’t get enough of his Gatsby-like tales of money, mayhem, and murder. Beginning with his first trial in 1922 through mid-1928, it is safe to say that George Remus was one of the most well-known figures in America.

A: George Remus’s epic tale has so many twists and turns that some readers might think it is too fantastical to be true. How could one person’s life contain this much chaos? When I tell the story, people have the exact same reaction every time: “Why don’t I already know this?” and “This must be a movie!”

My favorite history books provide deep insight the issues of the past and act as a kind of guide for addressing contemporary concerns. What I hope readers take from The Bourbon King is a deeper appreciation for the 1920s and how this era still reverberates today. We are still learning the lessons of Prohibition.

The most destructive aspect of the dry era was that it took a significant human toll. Many lives were wasted, whether it was people being poisoned by tainted alcohol or the countless number killed in enforcing the Volstead Act or attempting to circumvent the law.

We have seen similar scenarios play out over the last several decades with marijuana legislation and enforcement, which has been magnified as states make weed fully or medicinally legal. How many lives have been wasted in the relentless pursuit of laws that most Americans now feel should be overturned? During Prohibition and with pot over the last several decades, a significant air of lawlessness became commonplace. We have to atone for the consequences.

A: I am really excited to be researching and writing a history of Rookwood, the famous Cincinnati ceramics company, which will celebrate its 140-year anniversary in 2020. Maria Longworth Storer was the first woman in American history to found and run a large manufacturing company, essentially turning the Queen City into the home of art pottery in America. If a museum anywhere in the world has a pottery collection, it is almost certain that a Rookwood piece will be on display.

Given the beauty of Rookwood’s wares, which include architectural tiles in Grand Central Station and countless luxury hotels and skyscrapers around the nation, I am working with Quarto, one of the top illustrated book publishers to create a book that will combine great photos and illustrations with my writing.

While Rookwood has aficionados around the world, we feel that its story is momentous for both American history and art history. Like The Bourbon King, we hope to bring an important but underappreciated story to a larger audience.

A: I really enjoy connecting with readers and history fans. I have an extensive book tour across what was Remus’s bourbon empire, stretching from Louisville through Cincinnati and into Maysville, Kentucky, the birthplace of bourbon in America. Many of these discussions have bourbon and/or eating components, with great partners setting up tastings to go along with the book talk.