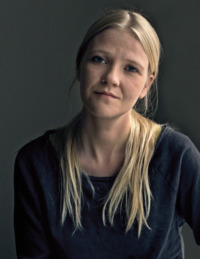 Kristín Eiríksdóttir is the author of the novel A Fist or a Heart, now available in English. A poet and playwright as well as a novelist and short story writer, she is from Reykjavik, Iceland.

Q: How did you come up with the idea for A Fist or a Heart, and for your character, Elín?

A: Initially, A Fist or a Heart was a short story. It was published in an Icelandic magazine called TMM and I thought that was that. But then Elín just stayed with me and the story kept evolving, so I ended up putting aside the novel I was working on, and opening up the short story again. A little bit like being in the midst of cleaning house and then finding a tangle of yarn that you get stuck with.

A: The story itself is about the fate of the narrator and her hold on language. I knew that it would lead to a point where neither I nor the reader could follow or comprehend anymore, but I wanted to get as far as I possibly could. It doesn't mean that I believe there is no life after language and comprehension, but that’s where this story ends... 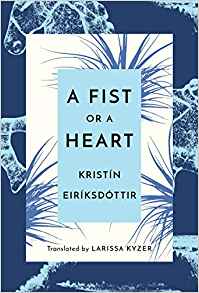 Q: How was the novel's English language title chosen, and what does it signify for you?

A: The sentence is used, very haphazardly, to describe the size of the space that opens up in the overcrowded psyche of Ellen—a young playwright—when she first starts writing. So the title of the book describes a positive space.

A: My biggest hope is always that the characters invoke empathy, which can open up some new dimension. The main character of this story is very strong and independent, but lacks the ability to connect emotionally with other people. So maybe I was also just trying to help her out.

A: I'm writing a novel about a middle-aged woman who is raising two boys on her own. One is a toddler, the other a teenager.

A: Yes, how much I loved working with my translator Larissa Kyzer, a young woman who made the original decision to move to Iceland and learn Icelandic, and to then translate, not only words, but an eccentric voice from a different culture.