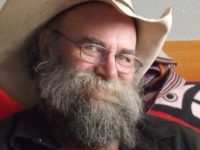 Finn Wilcox is the author of the new book Too Late to Turn Back Now: Prose & Poems 1980-2016. His other books include Working the Woods, Working the Sea. He spent 25 years working with Olympic Reforestation, a forest workers co-op, and he lives in Port Townsend, Washington.

Q: In an article on ptleader.com, Jenny Westdal writes, “Although Finn Wilcox has traveled, his writings are rooted in place. That place is the Pacific Northwest. This is the Northwest where work is found in the woods, and life is hard, simple and engulfed in beauty. This place runs deep, down to the core of a person’s identity.” What do you think of that assessment?

A: I’d say that assessment is spot on. The Pacific Northwest has always been the baseline of what I am. Aside from a couple years in Utah and short stints in other western states, the Northwest is where I’ve lived all my life.

Mentors and heroes, artists and poets that I have the highest regard for, all spring from here. To my way of thinking, no other artists compare to Morris Graves, Mark Tobey, Guy Anderson, Philip McCracken, Kenneth Callahan and all the other great lions of the early Northwest art scene. Same holds true for poets I admire most: Robert Sund, Tim McNulty, Mike O’Connor, Clem Starck, Jim Dodge, Gary Snyder, Michael Daley and many others. 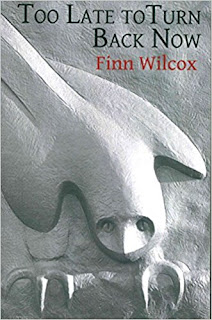 There is a sensibility (although hard to put your finger on) that ties all these artists and writers together in a loose but solid Northwest school. Half those poets I just mentioned I worked in the woods with all through the 1970s and ‘80s. If I had a dollar for every night we sat around a blazing wood stove in a tent drying out socks and gloves after a long wet day in the woods, I’d be a wealthy man. As Robert Sund said, “Poets with mud on their boots.”

A: I was giving some thought to reprinting my freight train book, Here Among the Sacrificed. My old friend and editor from Empty Bowl press got hold of me and suggested we do a book that also included my chapbooks and new work. Something along the lines of a collected works. Sounded good to me. And I must say, I am delighted to see much of my work, such as it is, in this handsome volume. 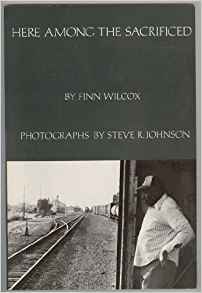 Q: How was the book's title—also the title of one of the poems in the collection—chosen, and what does it signify for you?

A: That's an interesting question. I believe all artists at some point go through something akin to metaphysical ambivalence. That is, you sit down, maybe with a bottle of Jack Daniels, and have a long talk with yourself about why the fuck you think anyone cares about what you have to say. It's a head-scratcher and something real that you need to come to terms with.

I decided at an early age that I liked beans and rice enough to commit to becoming a poet. That was many years ago. Now, at 65, the realization that it is indeed too late to turn back now, not only doesn't scare me, it delights and makes me deeply happy. I suppose that's one reason for the book's title.

Another is from an encounter I had one time in our local bar with an old painter friend of mine. He was extremely drunk and surly one night and bellowed down the bar at me, "It's too late to turn back now, until you poets realize that, you'll remain cowards not artists."

I still don't understand exactly what he meant by it, but it has stuck with me for 25 or 30 years now. He is long dead and it seemed a good way to give him three bows.

Q: Would you say there are certain themes running through the entire collection?

A: Not really. A measure of my life so far I suppose. 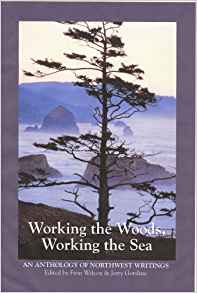 A: Frankly, I've been so busy doing readings and helping pimp this book that I haven't had much time to write. My intention is to work on short prose and poems about my time working in the woods. There is much to be mined from those times that I haven't even begun to explore.

The irony is that along with my co-editor, Jerry Gorsline, we put together an anthology of Northwest writings called, Working the Woods, Working the Sea, back in 1986. We did a new and expanded edition in 2008 that took up months of our time. I was so busy dealing with other people's writing about working the woods that I didn't have any time to work on my own stuff concerning the subject. I'm going to remedy that starting this winter.

A: I was milk monitor twice in kindergarten.