Q&A with Joseph A. Esposito 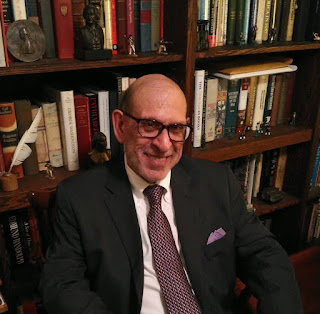 Joseph A. Esposito is the author of the new book Dinner in Camelot: The Night America's Greatest Scientists, Writers, and Scholars Partied at the Kennedy White House. A historian, writer, and educator, he served in three presidential administrations, and is adjunct associate professor at Northern Virginia Community College. He reviews books for the Washington Independent Review of Books and Kirkus Reviews, and he lives in Virginia.

Q: Why did you decide to write about the night John F. Kennedy hosted an assortment of scientists, writers, and scholars at the White House?

A: I met Senator Kennedy in the waning days of the 1960 campaign.  That meeting sparked an interest in public service; I subsequently served in three presidential administrations. So I was interested in writing about him on a topic that had not been given extensive attention.

However, the more I learned about this dinner—with its unprecedented array of distinguished guests and its historical implications—I became mesmerized by the story.

A: I was able to use the large amount of material related to the dinner at the Kennedy Library in Boston. Although there were 175 guests at the dinner—the largest of the Kennedy era—I largely focused on about a dozen people.

I was able to access other archives related to them and their attendance that night, such as through Linus Pauling’s papers at Oregon State University. I also profited from interviews, notably with Rose Styron, who was a guest, and Clint Hill, Mrs. Kennedy’s Secret Service agent.  Many secondary sources were also valuable. 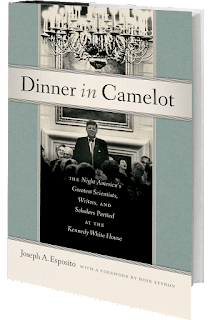 I am a historian, I had been in government, and I have lived in Washington, D.C., since 1981 so many aspects of a White House dinner were not surprising. What did surprise me were the details about many of the people that I highlighted and their interactions with one another.

The Pauling-Robert Oppenheimer relationship, which went back to the 1920s, was very interesting. I came away with a greater appreciation for the work of James Baldwin. And Mrs. Kennedy’s extensive work in restoring the White House, which I generally knew about, became clearer.

Q: What impact did the dinner have at the time, and what do you see as its legacy today?

A: The dinner was covered extensively in the newspapers and magazines. These accounts focused on the two controversial guests:  Pauling, who had picketed President Kennedy over a stalled nuclear test ban agreement with the U.S.S.R. before the dinner, and Oppenheimer, who had lost his security clearance in 1954.

But the glamor of the event also was covered, including its place among the outgoing series of social events at the Kennedy White House.

The legacy is that this was time when people of achievement were honored at the highest level of our government, on behalf of the American people.

At the height of the Cold War, it was a time when the country, despite differences, worked toward consensus in attempting to solve its problems. President Kennedy was an inspirational leader, and this event reflected that role.

Q: In a Washington Post review of the book, Thomas Oliphant writes of the dinner, “And it has resonated through the decades as a symbol of what that ‘one brief, shining moment’ was capable of on its best days, and of the impact a White House can have on American culture and the creative minds who inhabit it. Comparisons to the disgusting atmosphere of the present are obvious.” Do you think such an event could happen now, and how would you compare the cultural tone of JFK’s White House to that of today?

A: This dinner, honoring 49 Nobel Prize winners and many equally prominent thinkers and doers, was unique. Nothing even approaching it has been attempted since. It was a much different time, of course, but I believe that its success, again, reflected special leadership at the White House and an appreciation for the symbolism that it represented.

White House dinners in recent decades have included many celebrities; the Nobel dinner honored men and women of tremendous accomplishment—there were no singers or movie stars or even politicians (other than the president, vice president, and attorney general).

A: I am working on book about two somewhat obscure televised debates of the mid-1960s:  one between James Baldwin and William F. Buckley, Jr., on race relations, and the other between Ronald Reagan and Robert Kennedy on Vietnam. Baldwin and Reagan were the clear winners.

The interactions were notable, and they speak to us not only about that turbulent decade but also are meaningful today. I’m enjoying the research.

A: Tish Baldrige, the White House social secretary, repeatedly referred to this event of intellectuals as “the Brains’ Dinner.” French-born chef Rene Verdon was perplexed at first, thinking he was going to be asked to prepare brains for the guests. The main course was beef Wellington.