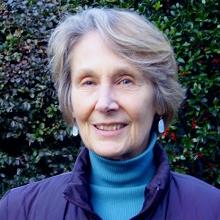 Elizabeth Minnich is the author of the new book The Evil of Banality: On the Life and Death Importance of Thinking. Her other books include The Fox in the Henhouse and Transforming Knowledge. She is senior scholar for the Association of American Colleges & Universities, and professor of moral philosophy at Queens University.

Q: You begin your book with Hannah Arendt. What do you see as the similarities and differences between her phrase "the banality of evil" and your formulation of "the evil of banality"?

A: Well, first, there's a rhetorical difference. I know that may not seem important, but people's first reactions to the two phrases have been startlingly different.

When Arendt took me with her to public discussions of her book, Eichmann in Jerusalem: A Report on The Banality of Evil, some who attended were painfully angered by the very idea that evil – in this case, the undeniable evil of the Holocaust – could be associated at all with "banality."

No, no: it has to be monstrous, and the man, Eichmann, on trial for his effective participation in making genocide possible, had to be in a sense worthy of it by being monstrous himself.

I wondered then if more people might be able and willing to hear what Arendt was actually saying better if she had spoken of "the evil of banality," which inflates "banality" by association, rather than seeming to deflate "evil." It turns out it works.

Asking people to think with me about the searing question that drives this book -- How is it actually possible to do horrific harm to others day after day after day, as the close-in perpetrators of extensive evils such as genocide, enslavement, child prostitution, life-distorting economic exploitation indeed do? – surely asks me in turn to speak in ways that invite minds to stay open.

And that matters a lot: understandably, we want to shut out the realities of monstrous acts, avoid thinking about them. Unfortunately, I fear that is finally a lot more dangerous than protective.

Reversing Arendt's invaluable concept led me not only to speak differently, but also to focus more on banalities than Arendt did. I did research on many more instances of historical evils and turned, too, to study of historical instances of extreme goodness (e.g. resistance to genocides; providing health care to the most impoverished and endangered; organizing for justice).
As with the relation between hate and love, that between evil, good, and thoughtless conventionalities takes us deep into who we are individually and collectively: creatures simultaneously capable of going very low, reaching very high, but also skimming the surface like tumbling tumble weeds going wherever the wind takes them.

I wrote The Evil of Banality also because Is altogether too ironic that Arendt's startling, thought-provoking phrase was being perverted into a banality. It was time to startle ourselves back into thought. Reversing the phrase has had that effect even as it also took me into differing, important territory. 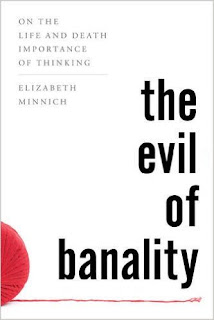 A: I define them with an eye on common usage. It is what we mean by "evil," by "good," and what we are doing when we think and speak those words that I think is important here.

We use "evil" when something is evidently so violative, so horrifying, that to call it "bad" would be ludicrous. "Evil" says boundaries of what is bearable, and/or explainable, have been crossed. Thus the evil of slavery is often called "unthinkable." It would be tortuously absurd to say, Well, yes; slavery was bad.

Cross the limits of "good," and there isn't one word with a force parallel to "evil." So, I explore some other words too. "She's not just good," we might say. "She's a saint."

Philosophy also has a term rarely found in everyday speech. This is sad, partly because it's fun to say when you get it down: supererogatory. Not going to become common, is it?

But the idea matters: there are good acts we are morally required to perform:  It is good to save a child from drowning in the puddle at your feet, so you ought to do so.

But saving someone else's child by running into a collapsing burning building from which the fire fighters have retreated? That's not "good." That's "supererogatory": above and beyond. Not morally required. Maybe not even wise or good in some other respects. A saint might try, though.

We do know that there is a good that is as extreme, as almost insane seeming, as evil. Interesting that it doesn't have as common a name, or use.

Q: You write, "There is a catch-22 right at the heart of what we are doing through this inquiry that I do have to pause to recognize." Can you say more about that, and whether it's possible to resolve?

A: I spoke earlier of the irony that the banality of evil has itself almost been reduced to a banality. That points right at the catch-22: when we try to kick-start thinking stalled by cliches, it can turn out that our best, freshest language catches on and next thing we know, it's become a thought-substitute itself.

A key point of my book is that being attentive and thinking for ourselves are matters of life and death – of more intense, engaging life in good times, of resisting becoming a perpetrator in bad times.

The evil of banality is a good phrase: it carries its contradiction right there, in its appeal. We humans are capable of turning anything into a cliché, even something life-saving.

If I could, I'd find a way to induce at least a mild allergic reaction whenever someone hears or uses an oh-so-in phrase. We'd all itch a bit most of the time -- "catch 22" is worth it -- but if we could learn to avoid the full-blown rashes caused by those who are walking, talking, tweeting clichés, it could help us save ourselves in time. 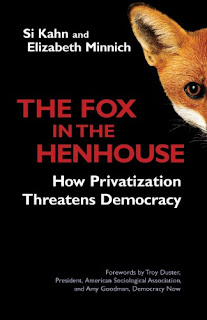 Lacking that allergy, what to do? We can practice attentiveness so we are able to be startled back into thinking. Be present with each other. Enjoy thinking, the free play of it, its irreverence.

Reflect, replay, reconsider, imagine, opening space for a responsive conscience. Think round and about what we are doing, not only in its own terms or usual tracks. Hang out with people who startle us.

Avoid mistaking a satisfying sense of familiarity with understanding...and see? Even this is risky. It is so easy to morph into slogans rather than prompts to reflect, and question.

There's a catch 22 even in "catch-22" – but awareness of it, and this was Joseph Heller's genius, points up lurking absurdity and contradiction, and that's one of the ways good thinking wakes up and becomes both liberating and, wonderfully often, funny.

So some over-used phrases may be homeopathic, but over-indulgence or dependence are still unhealthy. (Good question: that was fun.)

Q: What do you see looking ahead when it comes to the concepts of evil and banality?

A: We still dangerously romanticize evil, but we do know that most of us are neither monsters nor saints. We muddle along, making our choices not by the torches of Passion or Conviction, but the flickering candles of moderate, practical, daily virtues and vices.

We are responsible for those choices. We may be less clear that we remain responsible even when systems have gone very bad and what was once a virtue is turned into a vice, as speaking freely is re-defined as "irresponsible" when a fearful, powerful regime defines its own safety as "national security." 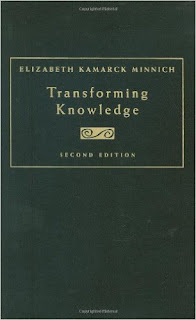 Then, I fear that too many of us, history suggests, will not think but simply go along: Oh, this is the new order. Okay. To succeed, to make money, to get ahead, to belong, I'll join up.

That is very dangerous, because then all those people really are not thinking what they are doing. In that mode, they/we can, as I have found, startlingly easily do the work of truly corrupt, even evil, systems and regimes.

One of the things I found most often? Careerism, a mild vice in good times and in the eyes of not a few even a virtue, if a sort of banal one – common, unremarkable, conventional – can be very similar whether one is a striver in a public service non-profit, a profit-driven corporation, a military dictatorship, an extremist group, a killing squad.

If we are not thinking about what we are doing, if we are occupying our minds instead with what it takes to “succeed,” like those whose work is deeply violative and harmful for others, for the earth, we are dangerously not paying attention.

We do need to beware of the evil that the auto-pilot of banality can carry us into all too smoothly.

As long as we hold onto those old romanticized ideas of evil as of good that say they have nothing to do with us ordinary folks, we are like carriers of the plague who feel just fine, hopefully will never get sick, but at any moment could. (Anyone who knows the work of Albert Camus will recognize the analogy.  I speak often of Camus' The Plague in my book.)

A: The book that kept wanting to be written as I worked on this one. If not thinking can be deadly dangerous, then education is even more important than most of us have thought. Education worthy of the name, that is; not just "training."

I am thinking about how we teach thinking, and not only knowledge and skills.  I am thinking and writing about why that is the most important thing we can do as a freedom-loving, moral society.

A: Will you excuse me if I ask myself a question I'd have if I were reading this but had not yet read the book? So, Elizabeth: Do you think all evildoing is caused by people not thinking, being "banal"? No.

In my work, I found it necessary to make a key distinction. Extensive evils, as I call them, cannot be done without many, many reliable, ambitious people to do their work. An economy based on child labor, for example, cannot keep going without such people. While it lasts, it is “normal,” protected by the unthinking of banalities.

Intensive evils, in stark contrast, are the ones that seem to burst out of nowhere, shock almost everyone, require only one or a few perpetrators and usually very little time. They really are the opposite of conventional.

Intensive evils are still the default meaning of "evil": because they are in so many ways the opposite of extensive evils, this is unhelpful.

We can stop extensive evils precisely because they cannot happen at all without so many of us over time. Think about that!