Chuck Raasch is the author of the new book Imperfect Union: A Father's Search for His Son in the Aftermath of the Battle of Gettysburg. He is the chief Washington correspondent for the St. Louis Post-Dispatch, and he previously worked for USA Today and Gannett News Service. He is based in the Washington, D.C., area.

Q: How did you learn of the story of Sam and Bayard Wilkeson, and why did you decide to write a book about them?

A: This story is often a paragraph in the histories of the battle. It's been used as an example of the personal sacrifice of the war. Bayard Wilkeson's actions there, and heroism, have been mythologized.

I felt his father, who wrote one of the finest dispatches of that or any war amidst his search for his gravely wounded son, also performed heroically. I wanted to dig beneath the myth and the single paragraph.

I decided to focus on the aftermath of the battle after a fortuitous meeting with a Vermont family at the battlefield. As I explain in the introduction, I had been sent to write about the 150th anniversary of the battle for USA Today in 2013. I was not that enthused about the assignment. What hadn't been written about Gettysburg?

My final day of reporting there, I was on Little Round Top, surrounded by school children who were playing on the rocks. Reflecting on the history was a distant idea.

Then I saw three people standing solemnly, almost reverentially, off to the side. It was the Clark family from Vermont, and they were there with the diary of an ancestor who was killed on the third day at Gettysburg. They had been tracing the final days and hours of his life through that diary.

They told me the diary had been passed down through generations, and family members often speculated how different the family would be had this promising young company clerk, Myron Clark, lived a longer life.

I realized then that the real story of Gettysburg - and of all war - is not just told through the acts of soldiers or the exploits of generals. It is forever. I wanted to tell about the story after the guns went silent. 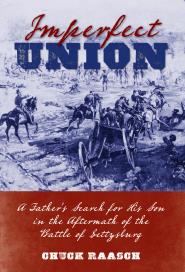 Q: What do you think the Wilkesons’ story says about the Battle of Gettysburg and the Civil War in a larger sense?

A: That our need to mythologize is a strong component of how we process events in war, how we treat the news from it, and how we try to make sense of it. I also learned that reality sometimes is more powerful than myth.

For instance, the death of Bayard Wilkeson has been mythologized as that of a young man who stood fierce in defense of freedom and his country. He is depicted in a famous painting as standing firm and whole, sword drawn.

In reality, he died a slow and painful death, but that should not diminish his self-sacrifice, or that of the many anonymous people who came to comfort him in his final time on this earth.

In a larger sense, we see through Sam Wilkeson the emergence of the war correspondent as a profession. He was one of the deans of Civil War correspondents, and they were quite a lot.

Daring, courageous, sometimes even devious or propagandists, they were inventing the profession on the run, in the middle of the most destructive war in our history.

They were also doing it at a time in which a previous media revolution - the invention of the telegraph - was changing media and culture and average Americans' lives every bit as much as the Internet and social media has changed ours.

My book challenges the factual and mythological narrative that has been constructed around Bayard Wilkeson. If you go to the Gettysburg battlefield, the museum has an exhibit about him.

I don't believe it is 100 percent accurate in the way it describes his actions on July 1, 1863, and my research into the 19-year-old's actions that day leads to a different story. But in some ways, it is more heroic than what is up on the wall in the museum.

Q: How would you compare Sam Wilkeson’s work during the Civil War to that of war correspondents today?

A: He was our era's version of an opinion journalist. He wrote both straight news, but also - true to his time - would frequently segue into advocacy, even ghost-writing speeches for politicians.

He was absolutely fearless, and despite working for a Republican newspaper - most newspapers then were identified as organs of one party or another - would frequently criticize the Lincoln administration or officers he felt bungled a battle.

He also pushed back more than almost any other correspondent of that time against government censorship, the suspension of habeus corpus, and legal action against journalists.

In that way, he shows us today that fighting for the First Amendment, for freedom of expression, and for journalism as an essential block of our democratic institution, never should take a break, in war or peace.

A: I was lucky. The Wilkeson family was an inveterate letter-writing lot, and the Buffalo History Museum, among others, has fantastic archives on them.

The Civil War armies were exhaustive record-keepers, too, and efforts by Cornell University and others to digitalize hundreds of thousands of those pages and make them accessible to researchers is a scholarly gift.

My book has 909 footnotes, so it is well researched. I spent countless hours at the National Archives, the Library of Congress, the Gettysburg National Military Park Archives, the Adams County (Gettysburg) Historical Society, and regional historical libraries researching this book.

Through the course of this, I read literally hundreds of letters or personal accounts of people who came to the battlefield at Gettysburg after the battle, some from hundreds of miles away, looking for their wounded or dead son, or brother, cousin or friend. Thousands of people like that came.

The one thing that universally struck me was that, in their everyday writing, they were far more contemplative, illustrative, descriptive, and perceptive than we have become in a world of 140-word throwaway Tweets.

Many could not spell, and their grammar lacked, but their observations, at times, had me gasping, hand on chest. I was awed, frankly, by the depth of perception of everyday people.

Remember, this was just the dawn of the visual age. Matthew Brady had made headlines nine months before Gettysburg with his "Dead of Antietam" photography exhibit in New York City that showed dead soldiers after that battle.

Journalists, and people, knew a new age of expression was coming in this new medium. But on the cusp of that revolution, the written word was still the primary tool of communication for people. They were required to be more expressive in that medium.

A: A novel, set in South Dakota, my native state, about the spirit of a famous person who returns through the spirit world.

A: That writing a book with 909 footnotes is like having a modestly annoying toothache for three years. Mostly, you know it's there, waiting in the back of your mind for the inevitable need to end it, and you accept the pain. But it never pains you enough to end it now.

Besides, there is that pleasure-pain line that can be rather interesting. Sometimes, the slight movement or touch of the tongue makes that tooth feel pretty good.

I had many of those moments in this book, what I'd call "aha" moments - where the pain of research suddenly moved to exhilaration of discovery. But by the end, when it was done, the relief was like what you get when the tooth is removed or finally fixed.