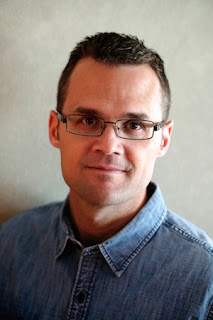 David Eric Tomlinson is the author of the new novel The Midnight Man. His work has appeared in publications including Zouch Magazine and Phantom Drift, and he lives in Dallas.

Q: How did you come up with the idea for The Midnight Man, and why did you set most of it in the 1990s?

A: I was jogging. Lungs burning, legs hurting. Suddenly an image comes to me: a man running along the railroad tracks that bisect downtown Oklahoma City. Where was this guy running? What was he running from? I spent the next five years trying to answer that question.

I grew up in the manufacturing town of Perry, Oklahoma, and had always wanted to write about the 1995 bombing of the Murrah Federal Building, in Oklahoma City. Perry is where Timothy McVeigh was caught, one hour and 18 minutes after detonating his bomb.

The bombing, I decided would be my subject. Early drafts involved only a few characters. There were several detours and false starts. At one point I was writing flashbacks that followed Timothy McVeigh as he prepared for the event. But it was very dark, too dark, and I ended up cutting all of this.

Eventually the story grew into a more structurally complex but emotionally satisfying one. It takes the social forces of that time and place, personifies them – in five very different characters – and follows each, as he or she struggles with complicated racial, political, and social pressures.

While the historical and political forces of the time are all converging toward a horrifying climax, these five characters are overcoming those same forces, to form a kind of family unit. You realize, in the end, that we’re all going to be okay. It’s a much more hopeful vision than the thriller I set out to write.

Q: You tell the story from a variety of perspectives. Were there some of the characters that you especially enjoyed writing about?

A: This is really a very simple book. It’s a story about family – about finding the family you need, rather than the one you’re born into. Each of the five main characters has some work to do on themselves, some sort of emotional arc. What none of the characters realizes is that they can’t possibly do this work on their own.

In the beginning, everyone is very much alone. As the novel progresses, the characters begin pushing up against – and then slowly empathizing with – those who think and act in fundamentally different ways. We don’t become the best version of ourselves in a vacuum. It takes the humility and wisdom to ask for, and to accept, help from others.

All this being said, “Big” Ben Porter was the most interesting character to write. He was also the most difficult. The most complicated. Ben is a bigger than life character – ambitious, successful, funny, manipulative, somewhat dangerous. He represents an acquisitive, power-hungry approach to life that I’m very much opposed to. The character arc I envisioned for him was: “to help someone other than himself.”

In the early drafts, I had a lot of trouble writing Ben. Basically, I didn’t respect him. It wasn’t until I stopped judging him, and began seeing the world from Ben’s point of view, that I really began to understand how he could be, not just an interesting character, but even a heroic one.

Q: How would you describe the racial dynamics among the various characters?

A: It would be hard to write a novel about and around the Oklahoma City bombing without addressing race directly. I wanted to show these characters struggling with very real racial tensions, which necessarily requires some uncomfortable moments – but then successfully resolving them. We’re all much more alike than we are different.

I think the racial interactions in The Midnight Man are true to that time and place. Both Ben and Cecil are products of an earlier, uglier era, when racial slurs were often used in casual conversation. Dean Goodnight (a Choctaw Indian) and Aura Jefferson (an African American) are subjected to the kind of racial micro-aggressions, at work and at play, which people often intend as humorous asides. Depending on the audience, sometimes the joke lands, or, more often, it feels like a wound.

Something I came to understand, while writing this book, was the difference between bigotry and racism. Bigotry, one character explains to another, is a personal construct. It’s a feeling. Racism, however, is the institutionalized effect of that feeling. A bigot in a position of power – the power to deny someone the vote, or a home loan, or railroad them into jail – becomes a very dangerous animal.

A: The working title of the novel was originally American Prayer, after The Doors song, which is quoted in the epigraph. My agent suggested The Midnight Man. It’s a phrase used by a child, to describe Aura Jefferson’s dead brother Carl.

I like the new title because it captures the racial undercurrent running throughout the story, while simultaneously honoring the murder victim who brings all of these characters together.

A: Another novel, though I’ve become superstitious about discussing my unfinished work, and so don’t want to talk much about it. I will say that there is only one main character, so structurally it’s much simpler, and it’s written in the past tense.

A: I’m hosting a book launch, in Dallas, on Jan. 16, and a few other readings – in Oklahoma, Texas, and elsewhere – throughout 2017. There is also a book club discussion guide provided at the end of the novel. I’m happy to come talk to your club about the story (either in person or via Skype). You can learn more about all of that on my website.