Craufurd D. Goodwin is the author of the new book Walter Lippmann: Public Economist. He is the James B. Duke Professor of Economics Emeritus at Duke University. His many other books include Economic Engagements with Art and The Academic's Handbook.

Q: Why did you decide to look at Walter Lippmann’s writings in the context of his work as a public economist?

A: I have always been interested in how ideas as they evolve in a scientific community are inserted into the policy process. Years ago I did two large studies for Brookings that resulted in big books that explored how policy was formed regarding control of inflation (Exhortation and Controls) and energy policy (Energy Policy in Perspective).

There I dealt with thinks tanks, academic entrepreneurs, and analytic units of government. I knew that some day I would need to do more with the media.

Then when I began to read some Lippmann I realized that he had all the qualities required to be a great translator of policy ideas. When a conference plan stimulated me to think about "public intellectuals" I realized that Lippmann was the perfect specialist in this community devoted to economics.

Access in our main university library to all of  Lippmann's writings and his enormous trove of unpublished material gave me the opportunity to explore his career and his contributions.

Q: As you researched this book, was there anything that particularly surprised you about Lippmann’s views or his impact? 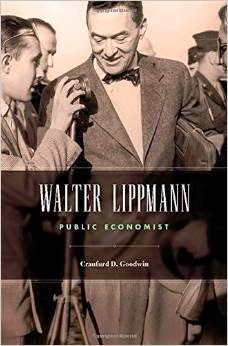 A: I don't think I was surprised so much by his views or impact as I was impressed. To begin, he was remarkably flexible and sensitive to new knowledge. He has often been criticized for flip-flopping. I find that a virtue.

The reason for his impact became clear to me as I worked on him. He was not the prisoner of any fixed ideology or party. He presented his readers with the conclusions he reached after serious study. The readers were grateful.

There are few places readers can go to this day for the kind of insight and candor he provided. I can remember my parents - my father a banker and my mother a lawyer - devouring Lippmann in the morning paper.

Q: How would you describe the dynamic between Lippmann and economist John Maynard Keynes?

A: Walter Lippmann and John Maynard Keynes were remarkably alike and their careers were extraordinarily parallel. They both appreciated this and took advantage of their particular experiences.

Among smart people I have known, I found that they tend to feel comfortable with each other. I would love to have heard these two in conversation. They had very similar values and style. They both had a strong sense of public service and each appreciated that in the other. They also exploited each other, in the best sense of that word.

Q: You write of Lippmann, “He was more than a journalist in the sense that the term is used today. He had a relationship to his readers that was a mix of trusted adviser, teacher, confidante, mentor, and friend.” Do you see any person or institution today that fills a similar role?

A: I don't find an exact equivalent today, but there could be one. It is just hard to think of anyone with the qualities you find in Walter Lippmann: high intellectual horse-power, quickness, great self-confidence, capacity to charm, sense of public responsibility, good judgment (at least by my lights), commitment to hard work, and substantial personal wealth.

One reason why we see few people with these qualities in the media today is, I speculate, because they are drawn away early on into academe or the professions.

Another reason is because the academic disciplines are far less penetrable today by an "amateur." Walter Lippmann could master most segments of economics in a month or so of readings; that would be very hard to do today.

The person I have known who was most like Lippmann, and might have had  a similar career, was McGeorge Bundy, my boss when I worked at the Ford Foundation. Ironically the two were very good friends but, unlike Lippmann, Bundy was quickly drawn away into high-powered jobs in academe, government, and philanthropy. He never tried his hand at journalism.

I should say I think it would be wonderful if a modern Walter Lippmann were to appear, but the odds against it seem long.

A: I am preparing a paper for a conference on how economics interacted with the new discipline of psychology in the first half century of rapid development in the two fields, 1890-1940. I am having a good time.