Louisa Lim is the author of the book The People's Republic of Amnesia: Tiananmen Revisited. She has reported from China for many years, for NPR and the BBC, and is a visiting professor at the University of Michigan. She lives in Ann Arbor.

Q: You write, "To write about present-day China requires an almost impossible calculation, weighing the risks and consequences of every sentence." How did those difficulties affect you as you wrote this book--and also as you reported in China for many years?

A: My biggest concern has always been the safety of those whom I have interviewed, and with this book that was always a big unknown.

When people agreed to be interviewed, we were all aware that there was simply no way of predicting how much the political climate might change by the time that the book came out, so I felt like people were placing extraordinary trust in me by simply telling their stories to me. I felt that I needed to honor their trust by making sure their stories were told.

I wrestled for a very long time over the issue of whether to use people’s real names or not, but for the most part, their experiences had been so distinctive that there was simply no way of disguising them.

In the event, 2014 marked the biggest crackdown in the run-up to the anniversary of [the Tiananmen Square crackdown of] June 4 [1989] in a quarter century with 152 people detained, arrested or placed under house arrest according to overseas rights groups.

This new clampdown affected several of the people in my book. The soldier-turned-artist in the first chapter, Chen Guang, was detained for more than a month after he created an art installation referencing the crackdown and its disappearance from the collective memory.

One of the Tiananmen Mothers, Zhang Xianling, who lost her son in 1989, was one of 15 people who attended a private seminar commemorating the deaths; five of the attendees were arrested, and one of them – lawyer Pu Zhiqiang – is now awaiting trial.

Zhang Xianling was not detained, but she was questioned by police, then stopped from talking to the press. For me, any difficulties were very trivial compared to those facing those who had trusted me with their stories. 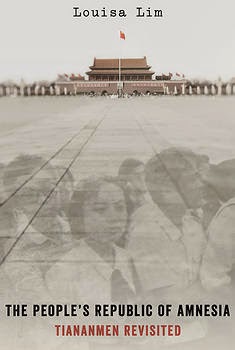 Q: What do you see as the most important changes in China in the past quarter-century, and what has remained more or less the same?

A: I could write a whole book just to answer this question!  China has changed enormously in the past quarter-century in all kinds of ways.

One of the most significant changes has been the withdrawal of the state from ordinary people’s lives; back in 1989, you needed permission from your work unit to get married, get a passport, go overseas or change job. That’s no longer the case, so individual freedoms have increased.

And Deng’s decision to push forward with economic reforms has made everyone richer, with disposable incomes seventeen times higher than in 1989.

But the apparatus of state control remains very much in place, and even strengthened through the use of modern technology.  For those who venture out of the safe zone, for the dissidents and activists who live under the gaze of China’s surveillance state, the repressive nature of the authoritarian regime is unchanged.

Indeed, at the current moment we are in a cycle of repression with waves of detentions, tighter controls over the press and ideological campaigns that hark back to Mao-era China.  So political liberalization has been frozen since 1989.

Q: How did you conduct your research for the book, and what surprised you most?

A: I found it very difficult to do research while I was in China, due to internet censorship and a general lack of access to information.

So I only began seriously researching the last chapter – where I uncovered details that had never been reported before of a deadly crackdown in the city of Chengdu – after I left China, and every step of that was surprising to me.

To begin with, it was astonishing to discover the scale of the protests – that had paralysed almost every major city in China – and then realize the fact that these have been forgotten both in China and overseas, where the 1989 protests are misremembered as something that only happened in Beijing.

To find out more about Chengdu, I began tracking down Western eyewitnesses who still had written reports and diaries, and taken their own photos.

At the same time, I was also looking through official Chinese state media reports which acknowledged that eight people had died in the Chengdu crackdown, though judging by the descriptions and U.S. diplomatic cables, the real figure was likely considerably higher.

I also drew upon other sources, including U.S. diplomatic cables, and documents in U.S. university libraries, to try to piece together a better picture of what had happened.

What I discovered was three days of street fighting and chaos, during which outnumbered government forces withdrew from the streets.

During one bout of fighting eight were killed and 1,700 people were injured, according to government figures. But foreign eyewitnesses told of a second, far more brutal crackdown in the courtyard of a hotel, where they believe they saw people beaten to death before their eyes.

At the start, I was so discombobulated by the discovery that there had been a deadly crackdown outside Beijing that I found it hard to believe, so I kept plugging away at the research – trying to find more witnesses, more reports, more proof – just to help me understand what had happened.

Given the scale of the protests and the ferocity of the crackdown, it was astonishing that all this could be literally erased from the collective memory, yet over time China’s Communist party has managed to politicize memory, that most personal of all spaces.

A: When I wrote the book, I was in Beijing, working for NPR and writing the book in secret. I told almost no one and never spoke about it at home or in the office because I was worried that, as a foreign journalist, I was being bugged.

I had one very trusted friend, who read an early version. We used to occasionally meet in noisy coffee shops to talk furtively about the book, and it was during one of those meetings that we came up with the title together.

Originally, my publisher was slightly reluctant to use such an oblique title  – they would have preferred Tiananmen in the title – but after they read the finished manuscript, they were happy with “The People’s Republic of Amnesia.”

A: I’m working on a new foreword for the paperback version of the book, which will be released next spring.

Since the book came out, hundreds of thousands of people in Hong Kong have taken to the streets in massive demonstrations demanding universal suffrage.

As in 1989, the protests were initially led by students, who even appropriated the iconography of the Tiananmen movement, launching their own campaign beneath a replica of the Goddess of Democracy statue that towered over Tiananmen Square in 1989.

Now Hong Kong’s “umbrella movement” has lasted longer than the Tiananmen protests. This has given my book a new relevance – so I have been writing and thinking about that right now.

I’m also working as a visiting professor of journalism at the University of Michigan, so I’ve been very busy teaching classes.