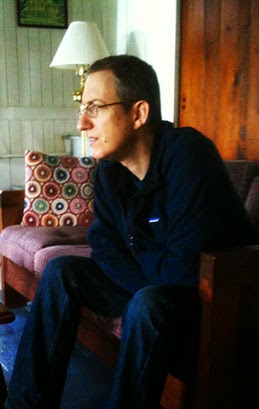 George Lerner is the author of the new novel The Ambassadors. A television producer, he has worked for CNN, Reuters, and PBS. He lives in Brooklyn, New York.

Q: How did you come up with your character Jacob?

A: I hear Jacob’s voice. That’s what came through—a man who is obsessed with his own vision of the world.

You take a man with clear boundaries, clear ideas, and a clear construction of the world, and [put] him in a place that challenges that. First, picking sides in a war he has no understanding of. Second, needing to return to the past to revisit what he comes to understand as his own betrayals.

The novel started with the two first chapters; [they are] essentially the first two chapters I wrote. A woman wondering how to tell her son she has a terminal diagnosis; a man in an airport going somewhere.

Q: Did you know when you wrote those first two chapters how the rest of the story would unfold, or did you fill it out as you went along?

A: Yes to both. I had an idea. I knew where this was going, but I didn’t know how I would get there. I had characters and I had a novel before I knew what would happen within the novel. The novel grew out of those characters.

The novel was informed by my work as a journalist. I spent a month in the Democratic Republic of Congo, in what seemed like the end of a long and terrible war.

I asked the question, how did the war start, how do I tell the story about the beginning of a vicious war, how do I fit Jacob in. I started the novel in 2003; I was a full-time television news producer. A few years later, I filled in the novel.

Q: Yes, I was going to ask you about how your work as a journalist affected your writing of this novel, in terms of your experiences but also in terms of the actual writing process. A: A few ways. There’s a very practical element—I get invited into people’s lives, and I get to record their lives so I can listen again. There’s a certain rhythm of a voice.

There’s no one [among the characters] I can say, Oh, that’s this person. There are certain historical figures, but people are not named, not any particular person.

Q: Why did you decide to include both the Holocaust and the Rwandan genocide as part of the book?

A: I looked at events. I am not a child of survivors, though I had two great-grandmothers who perished in the Shoah, and other relatives. Just as fact and fiction informed each other, I grew up with a father [who told] stories of being a soldier in the occupation [of Germany after World War II]. My father was not Jacob, but he was informed by my father’s stories.

It came up in Philip Gourevitch’s We Wish To Inform You That Tomorrow We Will Be Killed With Our Families; in Samantha Power’s seminal book on the genocide, A Problem From Hell; in Alison Des Forges’s writings in Human Rights Watch on the Rwandan genocide.

The questions of the Rwandan genocide: “Never again”—well, it did happen again. The cost of stopping it would have been very low.

Back to your first question, what prompted this character, these are questions that Jacob is asking, how could it potentially happen a third time, arguments about whether this is another genocide, a third genocide. I chose to ask them novelistically. 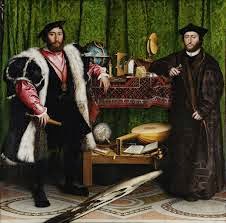 A: One comment I get [is about whether it’s a reference to] the Henry James novel. I say, no, it’s the Holbein painting...

There are obviously a lot of disparate themes in the novel; it’s a complicated novel. For me, metaphorically, this painting, at the court of Henry VIII, the ambassadors, the presence of the skull, these men, particularly the lead ambassador, this painting itself took on life 400 years after it was painted.

It’s a painting rich with symbolism. I didn’t feel the need in a novel like this to embark on that symbolism, but in a way, Jacob and Susanna, the husband-wife communication, the way she sees her family, as rugged men she can’t relate to--but she needs and seeks Jacob’s comfort.

A: This one took me a long time! I have another novel in the works. I’m used to, in television, to have an air date. With a novel, there’s no air date.

I think the next one is more autobiographical, though it’s not an autobiography. It’s a different kind of novel, but it has similar themes: family, maybe not as many grand events of our time, but illness, courage, and despair.

I intended Dudu to have echoes of Sancho Panza and Falstaff, but I hadn’t read [my character] Germaine and her steadfastness, or the captain and his bitterness. I looked for diversity in the [characters in the] band. There are very much echoes of friends of mine in Brooklyn; [they are from] across Africa, how they interact. It’s critical to show the diversity of personality, goals, and ambitions.

It was very important to me to echo what friends of mine had said, Zimbabwean…Senegalese: It’s not all about war. I focused on a terrible war, [the worst] humanitarian crisis in my lifetime, but I wanted to focus on more than this.