Tracy Wolff is the author of the new young adult novel Crave, the first in a series. She has written more than 50 novels, and she is based in Texas.

Q: How did you come up with the idea for Crave, and for your character Grace?

A: I never figured I’d write a vampire series because I didn’t want to even attempt it unless I thought I had an original take on vamps.

But when Jaxon’s world came to me (much of which will be revealed in books two and three of the series), I knew I had something a little different and that I wanted to run with it. And since I am blessed to have a publisher who is determined to bring vampires back, I got lucky enough to be able to write Crave.

Then Grace and Flint started talking to me in the back of my head and the story just kind of poured out.

As for coming up with Grace, she just started talking to me one day as I was thinking about who I wanted my heroine for this book to be. I didn’t know much about her, but she just had this witty, slightly sarcastic voice that hooked me the second I started to write her. 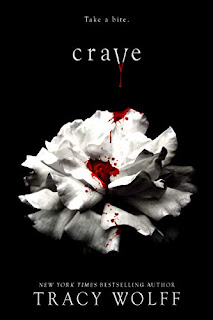 And, if I’m honest, I have to admit there’s a lot of me in Grace, probably more so than with any other character I’ve ever written—life experience (though I’ve never dated a hot vampire, sadly) and attitude and her unwillingness to give in to the bad things that have happened to her.

Q: What do you think fascinates people about vampires, and what first got you interested in them?

A: I’ve always, always, always loved vampires. I think The Lost Boys got me hooked when I was a kid, and I’ve never really looked back. Dracula, The Black Dagger Brotherhood, The Carpathians, The Farm, Twilight, Morganville Vampires … I’m here for all of them.

As for what fascinates people, I don’t know. I think it’s a little different for everyone. I think part of it is immortality, obviously—this idea that we can “die” and then live again, forever, with a little something extra. It takes away the fear of death, even as vampires to deal in death.

Which is a second thing I think we find so fascinating—in a lot of mythologies, vampires are pure Id. They get to do what they want, when they want, and no one can stop them.

Even though most of us don’t believe that’s okay, nor do we want to act like that in real life, there’s something kind of thrilling about the idea of that kind of power.

And finally, people have an interest in the macabre, the supernatural, the gothic. It dies out for a while, but every decade or so it comes back around and I definitely think we’re at the beginning of that cycle.

Q: You've written many novels across a variety of genres--do you have a favorite?

A: I actually love YA. Paranormal, romance, action adventure, or all three, like in Crave. I love writing teen characters as they face difficult dilemmas, often for the first time. What does that look like for them, how does it feel, how does it change them, what does love/hate/fear/betrayal/happiness look like at 17?

A: I want people to take away the idea that courage comes in all kinds of forms. And that even though life knocks you down sometimes, you can still be strong and powerful and kind.

A: Actually, I’m currently working on Crush, which is the second book in the Crave series. Diving back into Jaxon and Grace’s story has been a lot of fun—and so rewarding as I get to delve deeper into the storyline and their world.