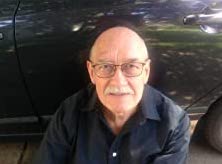 Norman Brewer is the author of the novel Killer Politics, a sequel to his novel Blending In. A retired journalist, he worked for Gannett News Service and the Des Moines Register. He is based in the Washington, D.C., area.

Q: How did you come up with the idea for Killer Politics?

A: I wanted to write a sequel to my 2017 thriller, Blending In: A Tale of Homegrown Terrorism, where I briefly introduce a thinly veiled President Tower.

I decided to expand his role to being an inspirational figure for a white supremacist. The supremacist and his confederates, including a wanted terrorist, use off-the-shelf weaponry like armed drones to wage terrorism attacks against innocent civilians.

Q: How much was Killer Politics inspired by today's real-life politics? 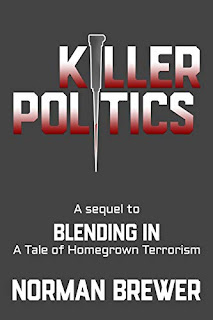 A: Today’s politics had a huge influence. By the time I seriously started writing Killer Politics, President Trump’s style, biases and many of his controversial policies had taken shape. The value of heavily incorporating political satire became obvious.

Satire and political analysis also are woven through the interplay among the terrorists. They see the fictionalized president and his nationalistic policies lending a sense of legitimacy to the far-right political fringe.

Q: What are some of your favorite political thrillers or satires?

A: That really dates me: Catch-22 by Heller, The Day of the Jackal by Forsyth, and Absolute Power by Baldacci. And then Animal Farm and 1984 by Orwell and Primary Colors by Anonymous (Joel Klein later identified himself).

A: This being a thriller, they should be entertained. 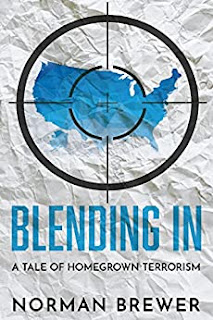 But I hope the satire focuses readers on the serious threats we are facing: Checks and balances ignored. Demagogy and personal attacks worsening societal divisions. Trust in valuable institutions eroding. Our inclusive tradition diminished. Long-time allies lost. The list goes on.

A: I’m not writing, though another book is possible. Terrorism is – and long will be – a serious threat, ample material for another cautionary tale. So Blending In and Killer Politics could become a trilogy. And of course, this political climate is ripe for satire.

A: It may be of interest that I came late to scribbling fiction. After spending more than 35 years on the print side of journalism, I moved to employee communications at the U.S. Transportation Security Administration. The TSA experience exposed me to a variety of security issues that have been helpful in writing about terrorism.