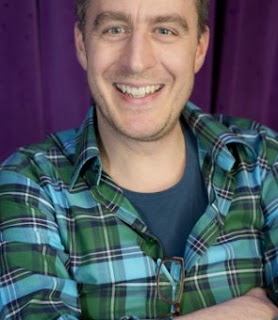 Tom Schamp is the author/illustrator of the new children's picture book It's a Great Big Colorful World. His other books include Show & Tell Me the World and Otto in the City. He is based in Brussels.

Q: How did you come up with the idea for It's a Great Big Colorful World?

A: I’ve been a full-time illustrator (over here in Europe) for almost 30 years and gradually color probably became one of the most distinct features of my artwork. For the last 15 years people and reviews often referred to it, while I actually didn’t have a clue why.

So after making a picture dictionary in 2015 (Show & Tell Me the World in English by Little Gestalten, 2016) in which I tried to create some order in this world’s chaos, I thought I could also try to arrange the world by color and its origins.

Otto, the little grey cat, had been the main character in at least eight previous books and I liked the idea of starting from grey to visit all colors of the rainbow. The fact that color is such a universal thing would otto-matically lead him to some kind of journey around the world without trying to tell one linear story. 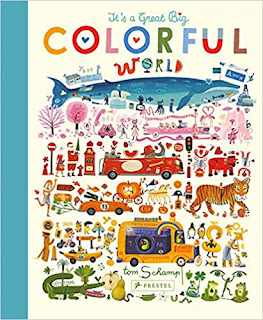 Q: How did you choose the various things to illustrate for each color? Did you need to do any research?

A: Unlike most books in this genre, this one’s no teamwork at all - apart for the cutting of images and the printing part - and I must admit I’m not a real researcher either… I rather honour Picasso’s - slightly hubristic - adage, "Je ne cherche pas, je trouve" (I don’t seek, I find).

To me creating comes down to the simple stream of consciousness of an artisan while painting, one thing really leading to another (that’s where the “train of thoughts” on the content pages at the end comes from).

I know my choices might be highly personal, but I think by being as open as possible to all influences and levels in society, which leaves enough common ground for a 50 year old from Belgium and a 6 year old from China to meet one another (as probably proven by the number of translations from all over).

And of course, I know that a lot of puns and stuff will go by undetected, but no one ever died of an overdose of aesthetically arranged information (contrary to the worldwide internet). 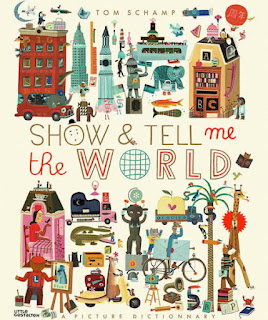 A: I haven’t got such high hopes apart from wanting them to have a good time sharing things. I generally address children who might still need (a little) help for reading from an adult. And generally these young children are better viewers then we are (since they can’t depend yet on what’s written under or above things).

I have the best memories of sharing books with our two sons at that age. I’m thinking of a cocktail party where kids bring the eyes and grown-ups the knowledge.

It’s not my goal to teach anyone anything, but I’m trying to show numerous links between every field of society and different cultures. Bringing everything together from high to low culture on simple spreads might show children how everything’s interwoven and help them look with open eyes to the world surrounding us.

Q: Who are some of your favorite author/illustrators?

A: No need to hide my love for Richard Scarry, I guess. I remember his books from when I was a kid and from reading with our kids.

I love his anthropomorphic style and overview and in some way this book and its predecessor are his Busy Town 2.0 with a world that has changed over the past 50 years (with more color, more active women, more pop culture, another relationship between humans and animals, etc.).

Another major influence in my drawing and view on the world has been Miroslav Sasek with his famous city books from the ‘60s. And as a Belgian I’m of course a life-long fan of Hergé. Even after dropping the black line for years while drawing, I still try to think the way he did, like a little observant Boy Scout.

The little grey cat in an exuberant world of colors is probably a bit like Tintin amongst all these much more colorful characters throughout his adventures all over the world. 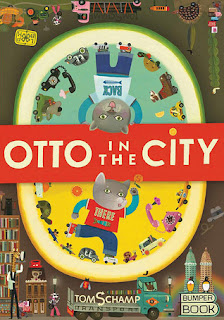 A: I must admit that for the first time in 20 years this is probably going to be a year without  a new book.

I’ve just received my latest one in Dutch (Waar is Iedereen? / Where is Everyone? Lannoo 2020), a smaller and simple fold out / pop up book for young toddlers which is in some ways the opposite of the great big world and I’m currently working for strictly commercial but equally artistically interesting projects in Japan and France.

Instead of heading head over heels to a third part in my more encyclopaedic books, I know it’s better now to get inspired by other commissions (being forced to paint stuff I’d never come up with) and then gradually find another interesting entrance to the book world again.
Q: Anything else we should know?

A: Not really. Below are some images from a PowerPoint presentation of the work in progress. Showing what the painting process actually looks like…With a lot of thoughts and quotes in different languages that don’t make it to the actual book. If necessary I can always provide some more “illustrative” materials.